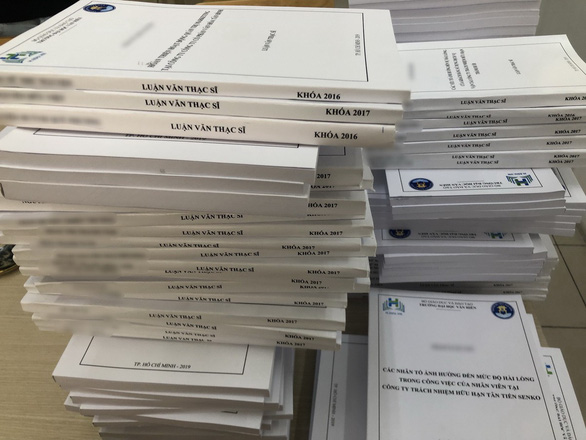 With more and more people in Vietnam getting a master’s degree to have better salaries and opportunities in their jobs, the market of thesis ghostwriting is also flourishing.

In diploma-obsessed Vietnam, a master’s degree can benefit its holder in many ways, such as bringing them a salary increase, a promotion, and an opportunity to work aboard.

Many Vietnamese graduates have thus sought a master’s degree to boost their qualifications.

But some of them just want to have a complete master’s thesis done without breaking a sweat, which makes a fertile ground for academic ghostwriting services to thrive.

You pay, we write

It is not difficult to find an online advertisement for the master’s thesis ghostwriting services.

Two Tuoi Tre (Youth) newspaper reporters went undercover as candidates for a master’s degree program in business administration and got in touch with a thesis ghostwriter known only as Tung.

Tung asserted that he could deliver a complete master’s thesis even though your correspondents told him that they had no knowledge of both its topic and outline.

“I will give you some suggested topics,” Tung said.

According to Tung, a customer using his service has to pay VND10 million (US$430) if the thesis involves a qualitative research, and VND12-15 million ($516-645) for a quantitative research.

Money shall be transferred in installments, with VND2 million ($86) to be paid after the completion of the thesis' outline and more payments will be made after each chapter is finished.

When your correspondents expressed concern about plagiarism, the man assured them that there was nothing to worry about.

Tung said he had a piece of software that could detect plagiarism and ensured that any thesis ghostwritten by him would be like no other.

Services from a professional

From a close connection, your correspondents met S., who is in charge of graduate education at a public university in Ho Chi Minh City.

S., who has a doctorate degree, is known for ghostwriting master’s theses.

According to S., there is a really high demand among graduate students, particularly those majoring in finance, banking and business administration, to have others write the papers for them.

S. said that he only agreed to ghostwrite two to three master’s theses a month, with average prices of VND10-15 million for an 80-page paper.

“But I have lately written a thesis for a director of a state-owned enterprise in Ho Chi Minh City for VND40 million [$1,720],” S. told your correspondents.

The busiest season for master’s thesis ghostwriters is September, according to S.

S. also gave the Tuoi Tre reporters the contact of N., another ‘supplier’ of ghostwritten master’s theses who now works at the Institute of Educational Research and Business Administration at the Political Fostering Center of Phu Nhuan District in Ho Chi Minh City.

Your correspondents asked N. if he could provide a ghostwritten essay for a master’s degree course at Van Lang University and another program at the University of Economics Ho Chi Minh City.

N. only agreed to help with the course at Van Lang University, which is a private college, and asked to transfer the other job to a third person.

“Ghostwriting the thesis for a master’s degree course at a private university is simple for me, while the University of Economics Ho Chi Minh City is at another level,” N. said.

Your correspondents managed to take photos of many printed theses of Van Hien University, another private college in Ho Chi Minh City, which were stacked on the desk of N. during their meeting at his office.

Upon being contacted for verification by Tuoi Tre, Van Hien University has confirmed that those theses really belong to their graduate students.

According to Le Si Hai, director of graduate education at Van Hien University, the school signed an agreement with the Political Fostering Center of Phu Nhuan District to offer some master’s degree courses there, and N. used to be in charge of both admissions and teaching tasks.

The university discovered that some of its students had hired N. to ghostwrite their master's theses a few months ago.

A professional panel was formed to review all of the dissertations, which eventually found that a majority of them were unqualified for thesis defense, according to Hai.

Many works were also discovered to have different titles but the same contents, he added.

“We have therefore terminated all cooperation with N. with regard to our master’s degrees courses at the center,” he said.

The school also returned the unqualified essays to the students for revision.

Hai admitted that the university’s lax management was to blame for ghostwritten theses having been able to reach the defense stage.

“We have since tightened our procedures and all master’s theses will be carefully reviewed for duplication and plagiarism before their defense,” he affirmed.