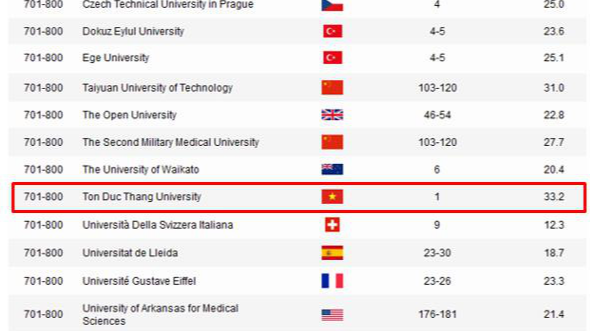 Ho Chi Minh City-based Ton Duc Thang University was named one of the top 800 universities in the world, according to the 2020 edition of the Academic Ranking of World Universities (ARWU).

The institution climbed over 200 spots since last year to enter the 701-800 band of the ARWU rankings, and it is the only Vietnamese university to make a showing in the table.

Ranked in the same 701-800 band with Ton Duc Thang University are world-renowned institutions, including the University of Waikato in New Zealand, Università Della Svizzera Italiana in Switzerland, the Czech Technical University in the Czech Republic, Université Gustave Eiffel in France, Chulalongkorn University in Thailand, and Chungnam National University in South Korea.

The ARWU is an annual publication of ShanghaiRanking Consultancy, an independent organization dedicated to research on higher education intelligence and consultation.

However, ARWU stands out from the two others for its exclusion of academia and job market consensus from the scoring formula, leaving only education capacity and academic achievements of alumni and staff in each institute to be counted.

Founded as a private university in 1997, Ton Duc Thang University was converted to a public university under the administration of the Vietnam General Confederation of Labor in 2008.