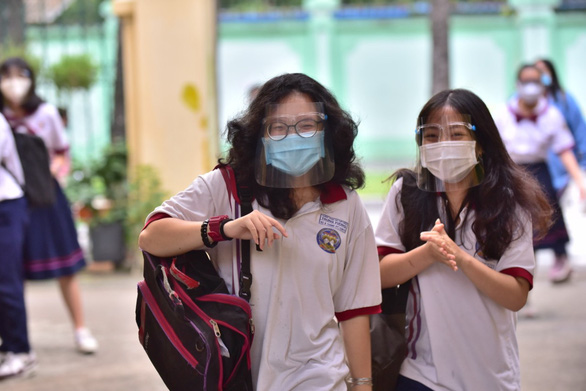 Despite the developments of COVID-19 in Vietnam, education authorities still stick to the plan to start the 2021 high school graduation exam, which involves the in-person attendance of nearly one million students, on Wednesday.

Traditionally held in July, the national high school graduation exam is an annual assessment that twelfth-grade students in Vietnam’s K-12 system are required to sit after they finish their studies.

Results of the test are needed for graduation and to help universities and colleges enroll undergraduates.

This year’s iteration of the exam is considered a momentous one as it is being held amidst the fourth and worst virus wave, which has driven Vietnam’s case count near 19,000 across 55 out of its 63 provinces and cities, as recorded since it first emerged at the end of April.

Back in 2020, the exam was delayed to August due to the epidemic situation. However, it has returned to the normal time frame of early July this year, even in provinces that are seeing an outbreak.

In light of the situation, provincial authorities have committed efforts, manpower, and resources to ensuring epidemiological safety for test-takers.

Many provinces and cities have tested all candidates for COVID-19 before the exam, scheduled for Wednesday and Thursday.

Candidates sat for the first test of Vietnamese literature on Wednesday morning before taking the math test in the afternoon, both of which are compulsory subjects for all test-takers, according to the Ministry of Education and Training’s direction.

On Thursday, they will do three other tests of choice, including one in the 'foreign language' category; one among physics, chemistry, and biology in the 'natural science' classification; and another among history, geography, and civic education in the 'social science' group.

On Wednesday morning, Pham Ngoc Thuong, Deputy Minister of Education and Training, visited northern Bac Giang Province, one of the largest epicenters of Vietnam in the fourth COVID-19 wave, to oversee the high school graduation exam.

Although the spread of COVID-19 in the province has generally been put under control, local authorities still had to suspend an exam venue at a high school after a student tested positive for COVID-19 during the screening process.

In southern Can Tho City, students had to endure a short shower before they reached exam rooms and took their first test.

“It has been raining since the early hours of the morning. I had to ask my friend to drive me to the venue,” said Nguyen Dang Thanh, a twelfth-grade student of Chau Van Liem High School in Can Tho.

“I’m slightly worried about the first day of the exam, but also confident about my performance in the literature subject.”

In the Mekong Delta’s Vinh Long Province, students showed up at exam venues as soon as 6:00 am to do check-in procedures.

As seen at the exam centers of Hoang Thai Hieu High School and Binh Minh High School, parents who accompanied their children had to pull over 50 meters away from the school gates and avoid forming large crowds in front of the schools.

“I’m worried about the COVID-19 situation, but hearing the at-risk exam officers were screened and superseded ahead of the test relieved me a little bit,” said Le Van Cong, a parent of a test-taker.

In Phu Loc District of the central province of Thua Thien-Hue, many students were seen donning raincoats on the way to exam venues due to a sprinkle in the morning.

A total of 13 students who live in cordoned areas in Loc Thuy Ward were allowed to leave to take the test at Thua Luu High School and Thua Luu Middle School.

They were transported to the exam venues on two specialized buses, and were told to do the test in isolated rooms.