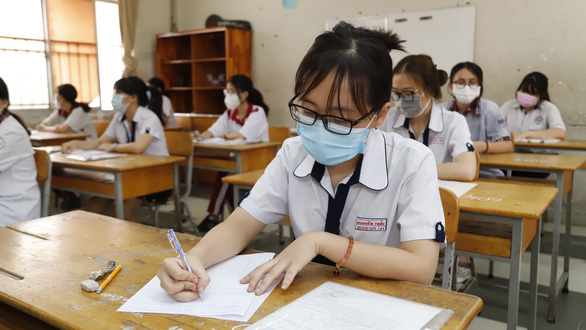 Vietnam's Ministry of Education and Training has decided to organize the second phase of the national high school graduation exam next month for students who could not attend the first leg due to COVID-19 impacts.

Pursuant to the ministry’s decision announced on Monday, the second phase of the exam is scheduled for August 6-7, around one month after the first phase that took place on July 7-8.

The second phase is also intended for students who had their tests in the first unfinished because of epidemic outbreaks.

The decision was made following the ministry’s consultation with local education departments in the country’s 63 provinces and cities, as well as the direction of Deputy Prime Minister Vu Duc Dam and the proposals of many provincial and municipal authorities.

Like the first one, the second phase will have five subjects that will be arranged during the two examination days.

The difficulty levels of the exam questions and their duration in this phase will be equivalent to those in the previous leg, the ministry said.

The ministry requested all local exam steering committees send their lists of students attending the second phase before July 20.

Since April 27, when the pandemic’s fourth wave appeared in Vietnam, the country has documented 61,940 domestic cases.