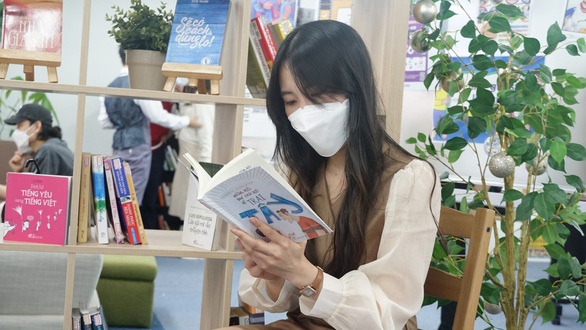 A group of Vietnamese students in Japan have set up a space for their compatriots to read and exchange Vietnamese books. At the same time, they raise funds for charity activities in their home country -- Vietnam.

The 'One Book, Thousands of Affections' project, hosted by the Vietnamese Youth and Students Association (VYSA) in Japan, has started its third season.

Through the project, VYSA volunteers collect Vietnamese books to set up a bookshelf for the Vietnamese community in Tokyo, Japan.

Young Vietnamese will come to read and exchange books in their mother tongue via the bookshelf.

Besides, the members organize book events as well as soft skill workshops twice a month, which help Vietnamese students, especially those who have the same hobby of reading, further connect with one another.

Nguyen Dinh Nam, president of VYSA in Japan, said aside from the bookshelf, they sell books to raise funds for charity projects on supporting disadvantaged kids in Vietnam.

In the first season of the project, they cooperated with the 'Khan Am Cho Em' (Warm Shawls for Children) in rebuilding a class of Nom Dao -- an ancient language of Dao ethnic people -- for artisan Tan Van Sieu in Sa Pa Town, Lao Cai Province, northern Vietnam.

In the second, they managed to raise money for constructing a clean water supply facility at La Van Cau Elementary School in Dak Glong District, Dak Nong Province, located in the Central Highlands.

In the third, they donated to the 'Vietnam’s Heartbeat' program for treating poor kids under 18 years old with heart disease.

It was hard to find a place to put their bookshelf into service without any cost, said Nguyen Kim Chuan, the leading operator of the 'One Book, Thousands of Affections' project.

The volunteers asked many organizations and companies in Tokyo for sponsorship.

Finally, they found one who provided them with a space enough for both books and events.

Chuan said in the past three years, the project has attracted locals and expats living in Tokyo.

It has received many kinds of books in not only Vietnamese but also English and Japanese.

“We try to bring the bookshelf closer to the Vietnamese community as well as foreigners in Japan," said Chuan.

"We also believe each book given to enthusiasts or kids in Vietnam symbolizes thousands of affections.”