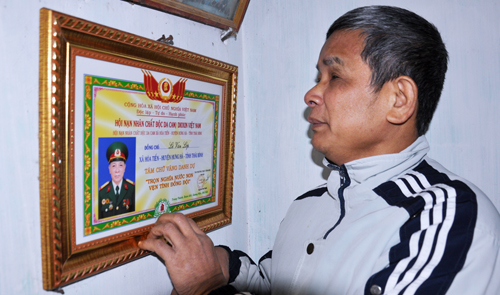 A former soldier of the Vietnam Army has suffered greatly from the legacy of war, leading a lonely life in utter agony for decades in the northern province of Thai Binh.

Le Van Lop of Hoa Tien Commune in Hung Ha District lost his eyesight soon after returning to civil life in 1975. He married in 1977, hoping to have a fulfilling and normal life despite his disability. However, his body was contaminated with Agent Orange, causing grotesque deformities in his ten children who died before delivery or just a short time after birth. Unable to sustain the pain of such loss, his wife became mentally ill and passed away in 2001.

Lop only finds joy and relief in touching his certificate of merit granted by the Vietnam Association of Victims of Agent Orange/Dioxin (VAVA) every day, recalling memories of his comrades in the war and his deceased wife and ten children.

In 1997, the local Department of Labor, Invalids, and Social Affairs of Thai Binh Province granted him war invalid status and a monthly welfare stipend.

Lop was admitted into the army in 1972, when the war was fierce. After training, he was sent to a battlefield in central Quang Nam Province. His unit fought in a wide area in forests from Tien Phuoc and Que Son to Mo Duc District in Quang Ngai Province and up to the central highland region.

When peace was restored in 1975, Lop was discharged from the army with invalid status of the fourth level for the partial loss of his eyesight as the consequence of explosions and poison dropped on the forests he fought in.

Lop married Dung in early 1977 and the couple began their new life together with around half a hectare of rice and some fish ponds.

Lop was not aware of the fact that his body was severely contaminated with Agent Orange/Dioxin that the US Army had dumped on the country during the war.

Lop says he can never forget the screams of the nurse and his wife when they first saw his deformed first-born in 1977.

They were shocked and horrified to see the motionless child, he says.

He entered the labor room, saw the scene, and dropped the bag carrying eggs he had prepared for his wife and his first child.

He carried the child in his arms and rushed back to his garden to bury him. Lop called the baby his son, but he didn’t look like a human being as he had no head and no limbs.

Villagers heard the story, but no one dared enter their house to encourage or comfort the grieving couple.

Lop began selling his land piece by piece to make money to send his wife to hospitals Bach Mai and 108 in Hanoi for treatment of her illness, which was still unknown to them then.

His wife gave birth to eight stillborn babies, who all suffered from the same deformities. Their assets went away gradually. The couple lived in silent agony.

Dung could no longer live in such torment and became mentally ill before she died in 2001.

Before dying, Dung held the hands of Linh, her former teammate in the female sapper unit during the war, and said, “If I die, please help me by living with Lop and taking care of him.”

Linh, also their neighbor, didn’t reply to her friend’s last request, but couldn’t stop obsessing over the agony Dung and Lop had endured.

Feeling pity for the lonely man, Linh agreed to move in with Lop in 2002, fulfilling her dying friend’s last wish. Linh was 40, healthy and beautiful.

She attempted to have a baby with Lop twice, but miscarried both times.

At the time, doctors were well informed of the consequences of Agent Orange/Dioxin and explained to the couple that their dream for a baby was an impossibility.

The former soldier of the anti-tank missile unit of regiment 371 of the artillery High Command is now aware of the true limits of his life.