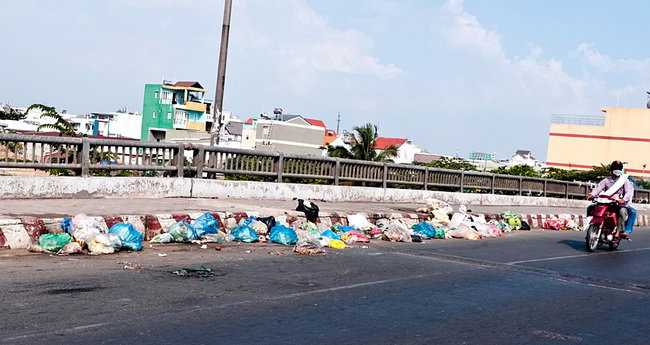 Many bridges in Ho Chi Minh City have long been inundated with garbage dumped by mindless residents, which makes ghastly scenes and poses grave pollution threats.

Though sanitary workers work hard to clear up bridges, garbage bags are relentlessly thrown away by unthinking residents along many bridges throughout the southern metropolis in the early morning and late evening.

These people are too lazy to walk to dumping sites, which are sometimes just a stone’s throw away, or are reluctant to pay rubbish collecting fees if they place their garbage bags in front of their houses for sanitary workers to pick up.

They thus find bridges, rivers, and canals ideal spots to dispose of their unwanted stuff.

The bridges which span two different districts or wards usually suffer the most, as the administrations of the two localities generally shift the responsibility for it to each other.

Though signs banning littering have been erected along such bridges, they have proven to be of little help in deterring residents from dumping consumer garbage, rubble, and even animal carcasses on the bridge surfaces or into the rivers or canals beneath.

Such piles and bags of litter make nasty sights and emit foul odors, which even become intolerable in the intense heat or during the rainy weather.

Bags of garbage are dumped on the surface of Cho Cau Bridge, which links District 12 and Go Vap District, causing bikers to drive in automobile lanes to avoid bumping into them. Photo: Tuoi Tre

While the bridge surfaces are filled to the brim with garbage bags, the water in canals and rivers beneath has turned murky and slackened under the weight of rubbish of all kinds, animal carcasses, and even human waste.

The pedestrian walkway of Hang Bridge which links Go Vap to Binh Thanh Districts is filled with garbage, causing pedestrians to walk on the road surface. Photo: Tuoi Tre