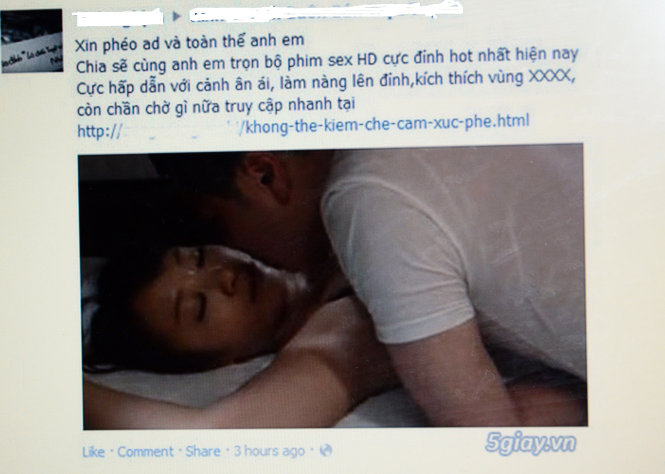 Sexual videos, images and chats have spread widely on social networks in Vietnam because hackers attack users’ accounts and use them to multiply sex links.

This disgraces the real users after the sex links – with indecent images, chats and invitations – are sent under their names to their online friends.

Any user on the social network may read and see these links if the account of one of their online friends gets infected with certain malware.

TH, 27, a worker at a furniture company in Hanoi, said one day she signed onto her Facebook account as usual and received tens of messages from her friends that she did not understand at first.

The messages said things like, “Are you going to get married and want to learn from this?”, “It’s terrible, you are going crazy,” or “You are going mad. It’s OK to read it, but not good to send it to others.”

An avalanche of other comments and questions with similar content filled her inbox.

TH only understood the situation thanks to one of her close friends and had to send out explanations and apologies.

She even sent SMS messages to clarify the issue.

It is not rare for users of social networks to become entangled in such a tricky situation.

Their accounts are infected with sex spam, which is common on social networks. By just clicking on a certain link, one’s account gets infected with it and it will automatically multiply links with sexual videos and content and send them to other users in their friend list.

Sometimes, a user is not even aware when their account gets intruded on by such malware.

Some hackers do this to re-direct users to click on their own page to increase pageviews and attract ‘likes.’

Their page may have miscellaneous sentences such as “Let’s watch to see what this couple does in this deserted place,” or “Fatal impacts of spraying sperm on your skin.”

It is a problem if a user has to send an explanation to around 2,000 online friends.

Some people have had to change their password several times before finally shutting down their account and signing up for another one.

Facebook rules state that a person must be at least 13 years old to register an account, but in reality, some third and fourth graders can do it by just claiming they are older than they actually are.

Information technology experts say that it is almost impossible for administrators of social networks to filter sex from the posts of their users.

Nguyen Van Thang, a former IT student, said that Facebook receives around 120 TB of data every thirty minutes, and its administrators cannot manage all of that content.

Nguyen Minh Duc, from the Internet network technology department at FPT, a leading IT company in Vietnam, confirmed that administrators cannot totally filter sexual images and texts with technical solutions.

Parents can limit the risk of their children getting access to bad content by installing software such as Bitdefender Parental Control Free, Windows Live Family Safety and Norton Family.

On Facebook, a user can establish settings to prevent their page from displaying the pages of strangers by accessing “Settings,” then “Who can contact me?” scrolling down to “Whose messages do I want filtered into my Inbox?” and then “Edit.”

By setting one’s account like this, they can prevent strange links, statuses and accounts from connecting to their page.

Social network users are also advised not to take part in groups and clubs that they do not know well in advance.