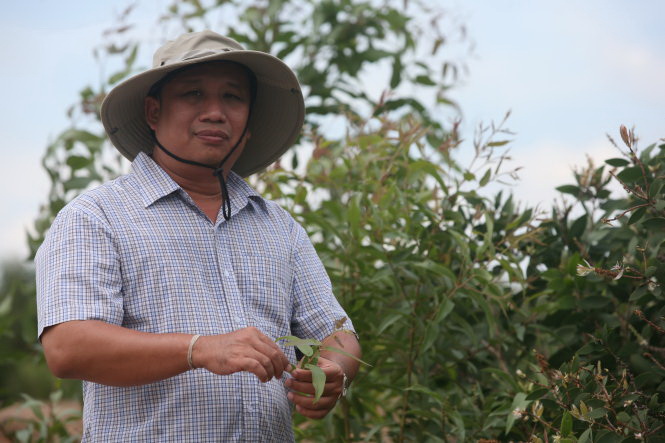 Vietnamese researchers have spent years dedicating themselves to conserving the shrinking cajuput gene pool in the Mekong Delta province of Long An as a means of boosting economic and tourism growth.

The center’s ‘father,’ Pharmacist Nguyen Van Be, passed away in September 2016, leaving behind an unfinished effort to build it into an eco-tourism site and herbal medicine conservation hub.

His dedication to that cause earned him the label of a labor hero granted by the government.

Despite the center now being accessible by road, Bui Dac Thang, its current director, still welcomes visitors the old way: via a sampan journey from Truc Dau Tram Bridge in Moc Hoa District.

“The dirt road is quite bumpy. Besides, traveling by sampan gives tourists the opportunity to behold the stunning riverine landscape,” Thang explained.

After Be’s death, the center devoted an exhibition space to the herbal medicine products he took years developing after first setting foot in the cajuput forest nearly 35 years ago.

Construction of a modern oil refinery and extract processing factory and a laboratory with cutting-edge equipment has also been completed and the pleasing aroma of essential oil is pervasive throughout the complex.

Since its establishment as Moc Hoa Long An Cajuput Oil Factory under a decision by the Ministry of Health in 1983, this is the first time that the enterprise has perfected its infrastructure to the point where it can facilitate comprehensive production, experimentation, research, and the processing of home-grown herbs to launch final products on the market.

“We keep reminding ourselves to continue where Ba left off and achieve his lifetime aspirations,” Thang said.

Thang also has a personal connection to Dong Thap Muoi.

More than 30 years ago, he and some other students interned under Be’s supervision at what is now the center.

After graduation, Thang ran his own business in Ho Chi Minh City until 1999, when he revisited the cajuput forest and Be shared his plan to develop the land.

The duo’s cooperation was quick to bear fruit, with the venture soon resulting in dozens of Moc Hoa Tram products made from cajuput essences and other herbs boasting medicinal properties, including extracts, ointments, and environment-friendly pesticides.

According to Thang, the total length of all the roads within the Dong Thap Muoi Herbal Medicine Research, Conservation and Development Center is a staggering 130 kilometers.

“Looking back, I realize that building the roads was a brilliant feat. One can hardly imagine the complex as a marshland decades ago, when I served my internship,” he noted.

Fields of cajuputs crested with white flowers stretch as far as the eye can see.

He explained they had gone through different procedures to import the lemon-scented gum from Brazil and multiply them in Vietnam.

Thang also pointed to danh danh (cape jasmine), a plant whose medicinal properties are being studied by researchers at the Hanoi Medical University.

The institution is currently safeguarding 50 strains of genes, its management told a seminar organized in August 2017 by the Long An People's Committee.

The center's conservation of the tram gio gene pool was enthusiastically lauded by pundits at the seminar.

The institution had earlier run a state-level project designed to keep the tram gio gene pool of tram gio.

“The project is of great significance because the cajuput area in Long An is shrinking rapidly,” Le Tan Dung, deputy chair of the provincial People’s Committee, remarked.

He added that the province is taking steps to have the complex recognized as a special-use forest in a bid to ensure permanent conservation of the gene pool.

Other activities including exploitation for research, seed incubation, and the conservation of other plant varieties are all carried out in the peripheral areas.

“No encroachment whatsoever is allowed in the restricted gene conservation area,” Dung noted.

The facility is the only destination in Moc Hoa that is a fixture on social media and on large tour operators’ itineraries.

They can also relish other rustic delights, food specialties, therapeutic treatments, and a relaxation atmosphere.

With the facilities already in place, Thang, the center’s director, disclosed that a second phase of development is already in the works and will provide training to residents in how to harvest cajuput properly, offer loans, and purchase cajuput essences at fair prices.

“Once residents can earn stable incomes, they will be willing to take good care of the assigned cajuput growing areas,” he noted.

Despite boasting one of the world’s two largest cajuput growing areas alongside Indonesia, Vietnam paradoxically imports over 2,000 metric tons of cajuput essence each year, the pundit said.

Over the past several years, a number of local households have sold homegrown lemongrass to the center for processing at high rates.