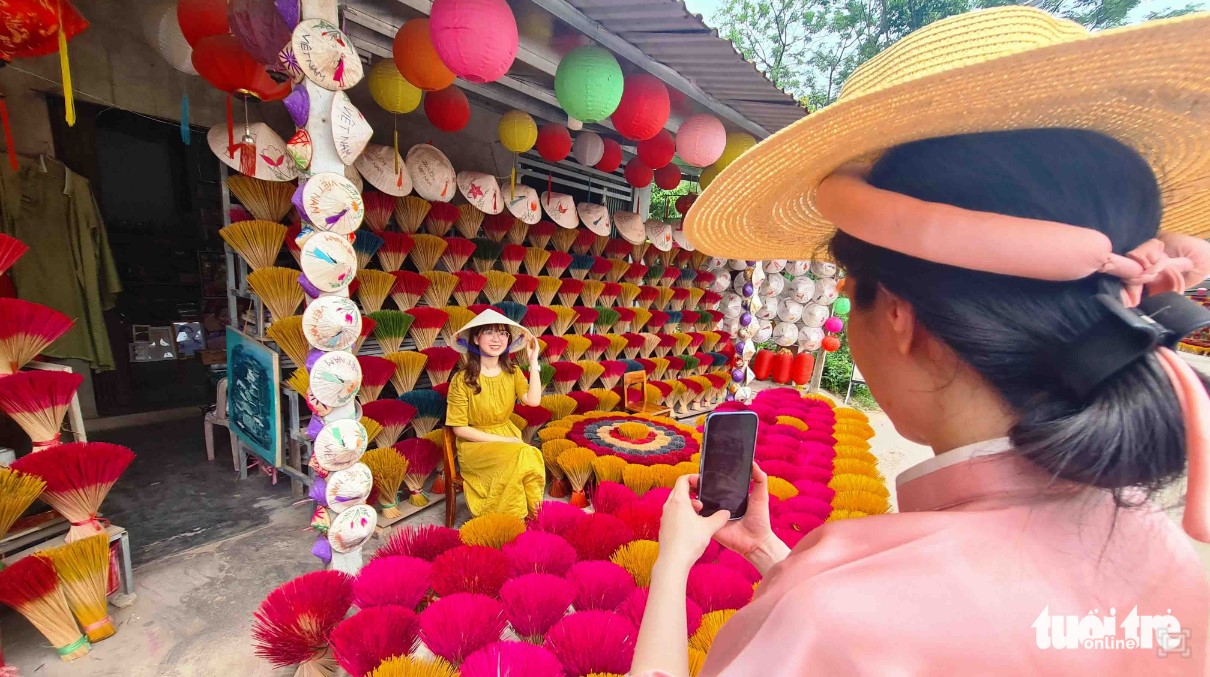 Once famous for producing incense for the ancient dynasties in the imperial capital of Hue, Thuy Xuan Incense Village has made its place on the travel map of Thua Thien Hue Province in central Vietnam.

Over the past ten years, Thuy Xuan Village, about seven kilometers from the city center to the southwest, has managed to transform the traditional village into an interesting tourist destination.

In the middle of the day, droves of visitors leave the city center to go to Vong Canh Hill in search of a dreamy green space. Fewer tall buildings line the stretch from Nam Giao Esplanade to Le Ngo Cat Street while more and more pine trees stand along the roadside.

At the end of the road, Thuy Xuan Incense Village in Thuy Xuan Ward, Hue City is located at the foot of Vong Canh Hill, which looks like a colorful movie studio to visitors.

In travel guides from home and abroad, Thuy Xuan Incense Village is presented as 'a world of colors.'

From the entrance of the village to the tomb of Emperor Tu Duc, which is about one kilometer long, bundles of colorful incense sticks in different colors such as blue, red, yellow, and purple are lying on the roadside. They look like eye-catching hydrangeas which help Thuy Xuan attract so many visitors to this day.

The village is always full of visitors who come not only to buy joss sticks but also to snap the impressive check-in photos of the village that circulate on the Internet. Even at noon, many people come to Thuy Xuan, as observed by Tuoi Tre (Youth) newspaper reporters.

Despite the uncomfortable sunlight, many young people keep up their old costumes to pose for their favorite photos in the colorful old village.

Thuy Xuan Village, which was quiet in the past, started to turn into a lively village about ten years ago due to some random events.

At that time, some tourists traveling to the village seemed much more interested in taking photos with bunches of colorful incense than learning how to make their own joss sticks.

The villagers found another way to make money instead of selling incense, as they did for a hundred years. So, they turn the stores where they sell incense into 'check-in places' decorated with different shapes and arrangements of incense sticks.

In the stores, they sell souvenirs and rent out old costumes, which have become the main source of income for many locals instead of incense sales.

"I often like visiting handicraft villages so I am no stranger to incense making and other crafts," Nguyen Bao Trang, a tourist from Ho Chi Minh City.

"However, Thuy Xuan Incense Village is so beautiful and it is suitable for young people to visit.

"In my opinion, the villagers have adapted to modern times to make a living.

"I posted about the village on social media platforms and the posts attracted tens of thousands of viewers."

The stories of the pioneers

The scenery of the incense stick village is so beautiful that every visitor feels compelled to pose for photos at every corner of it. Many of them wear old costumes for the photos and are willing to pay a small amount of money for them.

One of the best-selling stores in the village is Di Hoa, which sells incense scented with aloe wood from Ton Nu Mong Hoa. With her help, the store becomes a colorful place to be photographed at every corner. The 53-year-old shopkeeper is one of the pioneers who found the new way to make the village a tourist attraction.

According to Hoa, the agarwood incense cones made in Thuy Xuan Village were ordered by kings in the past to be used in palaces, tombs, or mausoleums. Therefore, the craft of incense making was a prestigious craft associated with royal privileges.

However, this was the case in the past. For some years now, there have been a growing number of artisans who make incense, and in modern times they can no longer make a living from this traditional craft.

The number of incense making households has decreased significantly while most young people have migrated to the cities to find better jobs. So only a few craftsmen like Hoa still maintain the traditional craft.

Villagers in Thuy Xuan made incense in front of their houses. Once, a group of Russian visitors stopped by a village in Thuy Xuan on their way from Tu Duc Tomb.

They were surprised to see how the incense was made by hand. They joyfully took photos with the bundles of incense drying in the sun and gave Hoa some money to thank her.

"The visiting Russians made me think about tourism. Therefore, I brought incense sticks to display in front of the house and arranged them in an attractive and beautiful way," Hoa recalled.

"Then so many tourists who visited Tu Duc Tomb came to my store.

"When I realized that my business worked, other villagers started to follow suit.

"Now all villagers have together switched to tourism."

The store owners do not charge visitors for taking photos and let them use fans and conical hats from Hue for free during their photoshoots.

They just rent out old costumes and sell souvenirs and soft drinks. Their hospitality and friendship make the village more attractive to visitors who give tips when they return.

"We have to charge for the ao dai [Vietnam's traditional long gown] because we have to wash and iron it after use. Visitors are happy to see our enthusiasm. They are gladly invited to take pictures and can borrow some items for free," Hoa said.

"Because of the good impression, they are also willing to buy souvenirs and drinks. In general, our villagers do not try to queeze tourists dry."

Hoa can earn about VND1 million (US$43) a day, a handsome amount by local standards, from her store when she receives an average of 50 guests. In the past, when she only sold incense sticks, it was difficult for her to make so much money.

She also has some memorable stories about the tourists who visited her store.

"There is a man named Tyler who came to my store and learned how to make incense. After he returned to his hometown, he came back to Thuy Xuan Village and asked his friends to make incense too," Hoa recounted.

Ton Nu Anh Tuyet, a 72-year-old artisan, is considered the symbol of Thuy Xuan Incense Village. She is known for spending all the proceeds from the sale of incense and souvenirs each month to buy gifts for children with cancer.

Tuyet showed Tuoi Tre reporters an old notebook in which she had written down her daily expenses and said that her store is crowded with visitors during these summer days.

On some peak days, she can earn up to VND2 million ($86) from selling souvenirs and renting out clothes.

"Some young people come to my store to take photos and then post them on the Internet, which helps lure more visitors from all over the country," she said.

"As a result, I get more guests and have more money to treat the children."

Phan Thi Dieu Huong, a visitor from the north-central province of Nghe An, borrowed an old Hue-style costume from Tuyet's store and feels at ease with the friendship and hospitality of the locals.

According to Tran Thi Ngoc, chairwoman of the Thuy Xuan District People's Committee, more than 10 households in Thuy Xuan Village are providing tourism services and producing incense at the same time.

At the end of 2021, the People's Committee of Thua Thien Hue Province recognized the production of incense from agarwood as a traditional craft.

This recognition not only contributes to the preservation of a traditional craft, but also encourages local people to invest in tourism, creating a new tourist attraction on the travel map of Thua Thien Hue.