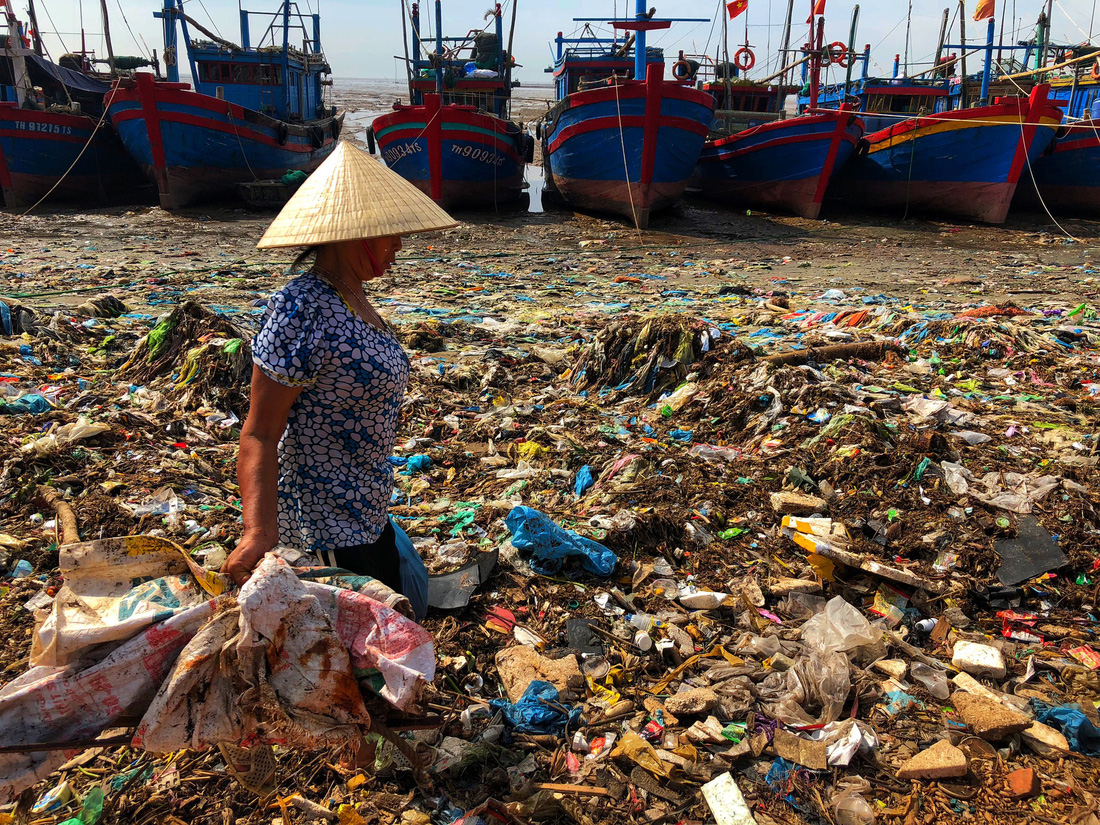 The coastline near Hau Loc District, in the north-central province of Thanh Hoa has become flooded with trash over the past 13 years.

The unimaginable amount of garbage engulfing the central coast is causing more than just environmental problems – locals who depend on the sea to sustain a living are finding it near impossible to earn money in such filthy waters.

Around noon each day, a vapid stench begins suffocating locals who find themselves near the water.

The source? Open landfills and wastewater being dumped by local seafood manufacturing plants.

The severity of the problem has been drastically increasing since it first became noticeable in 2005.

Now, trash stretches as far as the eye can see, replacing the blue waters with a sea of plastic and sand dunes with ‘junk dunes.’

Though ocean currents and tides bring in plenty of trash from other places, its clear that humans have also played a major roll in the problem.

The problem has become so dire that experts have begun to fear local marine life in the area.

According to Do Thi Chi, the number of clams in the region is rapidly diminishing due to the environmental pollution. “Even clams share our fate,” Chi said.

It takes clams three years to be fully grown for harvest, yet few are able to survive past their second birthday in the toxic environment, according to local farmers.

One clam farmer, Vu Van Dong, has incurred losses of nearly VND100 million (US$4,405) brought about by the garbage and its effect on the water. For many other farmers, the deficit is ten times bigger.

These numbers are particularly serious given that sea food exports are the regions primary source of income.

“If the government doesn’t tackle the environmental crisis for good, there won’t be anything left,” Dong said.

Trash or no trash?

“The beach used to sparkle white, and although the water was a bit opaque, adults and children alike could still go swimming,” she recalled.

Children were even able to raise their own clams for fun until 2005 when the area first went into decline.

“We may cope with hunger, but this amount of pollution is simply too much,” Mai lamented.

Mai Cat Vong, head of the management board of the local Minh Loc market, said drifting trash is constantly around, but “locals only make the situation worse by throwing their household waste directly into the sea.”

That said, Vong also explain that they aren’t left with much choice.

“Even though each household pays VND10,000 [US$0.44] a month for waste collection, the trash collectors only come every two weeks,” Vong said.

“There is no spare land nearby to use as a landfill, so what are we supposed to do?

Nguyen Van Long, deputy chairman of the Hau Loc administration, disagrees with Vong, saying he sees “no pollution in any coastal wards” in the district.

Long later added that the whole province, and his district in particular, is taking measures to resolve the situation.

He also revealed that Hau Loc District and its environmental problem have been designated as the province’s starting point for a campaign celebrating World Environment Day on June 5.

However, according to Dao Trong Quy, president of Thanh Hoa Department of Natural Resources and Environment, the idea is still being “processed.”

Below are pictures of the trash-filled area taken by Tuoi Tre (Youth) newspaper.