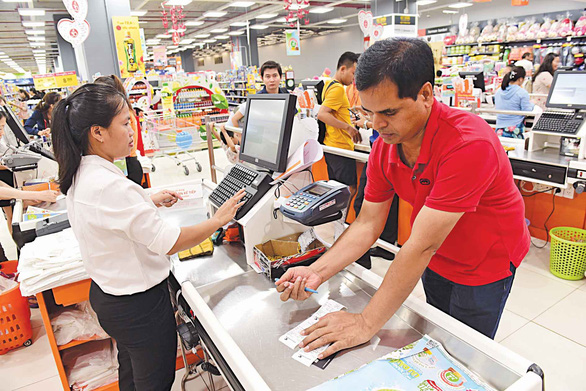 Foreigners on possibilities and shortcomings of a cashless Vietnam

As the inevitable switch to a cash-free society looms over Vietnam, many expats and foreign tourists believe a “cashless revolution” could bring big benefits to the Southeast Asian country.

Tuoi Tre News asked some foreigners for their view on the possibilities and shortcomings of a cashless Vietnam, as the country will observe the maiden Cashless Day on June 16.

Raphael Galuz, a French expat who has spent the past three years living in Ho Chi Minh City says he typically does his best to pay with plastic at shopping malls, hotels, big restaurants, and convenience stores, but it’s not always easy.

“I like being able to pay by card at businesses that don’t require a minimum purchase because I don’t always have too much cash on me,” he shared with Tuoi Tre News.

According to Galuz, cashless payments make it easy to keep track of monthly spending.

“I wish there were more places I could pay by card,” he said.  “How great would it be to just swipe by card or pay by mobile for a plate of com tam [Vietnamese broken rice grilled ribs]?”

At the moment, the 30-year-old Frenchman said he still has double check that he has enough cash before taking his girlfriend out to eat because  “a couple of times I was embarrassed when the restaurant didn’t take card and I didn’t have enough cash.”

Of course, there are more pragmatic reasons for businesses, especially eateries, to go cashless.

“If you go to restaurant with friends, it's easier to split the bills because not everyone has exact change,” he said, adding that “Cash is also a hotbed of bacteria because it goes hand-to-hand.”

According to Galuz, the benefits of a cashless society reach far beyond individual convenience.

“Vietnamese people seem to only trust what they can see and touch, that's why so many payments are still made in physical currency, whether it’s USD, VND or gold,” Galuz opined.

“This has serious impacts on the country because it means that fewer taxes are collected leading to less funding for public projects such as schools, hospitals, and roads,” he added.

Other expats in Vietnam seem to share Galuz’s view, with many sharing that they would feel safer if they didn’t have to carry cash in their wallets.

“If our bags are stolen, we won’t lose much money if we cancel our cards quickly,” Wayne Jordan from the UK suggested.

Filipino John Bayarong shared that he’s rarely had any trouble paying with card during the last five years he spent living in the country.

The man who switches off between using his Filipino credit card and his Vietnamese debit card said he always tries to use plastic for any amount over VND500,000 (over US$21).

Although some expats seem to prefer living a cashless lifestyle, many say they often come across difficulties while trying to use cards in Vietnam.

“I only have an international credit card and the bank’s fees make it uneconomical to use regularly in Vietnam,” Australian Ray Kuschert, a six-year resident in Vietnam said.  “Currency exchange fees and extra charges could definitely be reasons why foreigners hesitate to use international cards in Vietnam.”

Taiwanese tourist Lu Ling Kai shared that, while he supports the benefits of cashless payment and believes it should be encouraged by the local government, street food vendors don’t have systems in place to accept plastic.

Some places accept e-wallet payments, but that method is much more popular to Vietnamese people than to foreigners who are just visiting the country for a few weeks, he added.

Lu also noted the important role cash plays in Vietnamese culture, pointing out that it is a societal tradition to present cash on birthdays and weddings in lieu of other gifts.

“You can’t replace that habit with cashless payments because it might be considered rude,” Lu Ling Kai said.

Other reasons foreigners have said they hesitate to use cards in Vietnam are concerns over privacy, the fear of dealing with banks in Vietnam, uncontrollable spending.

“I think it’s possible for Vietnam to go cashless in the future, but not for a while; It’s in the culture and it’s in their blood,” Wayne Jordan, a British expat, expressed.

"Maybe over time things will change but I think it’s just a waiting game."

In Vietnam, it is difficult to earn a living in the countryside