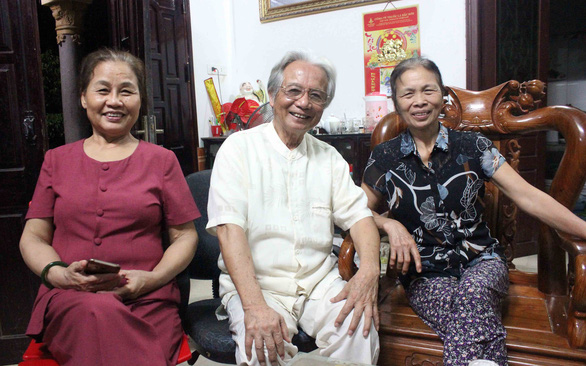 In Vietnam, husband and two wives write beautiful story of love and sacrifice

Many would find it strange when they first hear about a family in the northern Vietnamese province of Bac Giang, where one husband lived happily with his two wives, but the feeling may turn into admiration should they know how such a fairytale-like love story was written.

Nguyen Duc Loc met his first wife Nguyen Thi Ty when they were both in the military during the American war in Vietnam.

Shortly after her graduation from Bac Giang Military Medical University in 1965, Ty decided to join the army for nursery work along with her friends. Then she met Loc - the love of her life.

Loc received special care from Ty after he was severely injured in a battle in the Central Highlands province of Dak Lak in 1972, which was the start of a beautiful love story during the harsh wartime.

“We have been through ups and downs together as friends, lovers then husband and wife,” said Ty about her marriage with Loc.

The couple returned to Bac Giang and tied the knot in 1975, shortly after the war ended.

However, their marriage seemed to get stuck when Ty found out that she had been affected by Agent Orange, a herbicide mixture, which contained the highly toxic chemical compound dioxin used by the U.S. military during the war.

Ty had had multiple miscarriages before she realized that she could not have children as a result of dioxin, which became a huge disappointment to her parents-in-law.

At the age of 27, Ty made a bizarre decision on finding a new wife for her husband, who could give him children, after thorough consideration.

“Nobody wants to share their love, but I just couldn’t enjoy my life without thinking about others’ happiness,” she explained her bold decision.

Ty only revealed her plan to Loc after she had found a kind and graceful woman to be the new wife of her husband.

Upon learning of the weird decision, Loc at first nearly went out of his mind since he did not want to hurt her feelings.

But he later agreed to follow his wife’s plan due to her convincing talks as well as pressure from his parents that he had to have kids.

The couple divorced and Loc got married to his second wife, Tran Thi Van.

Van was such a kind and understanding woman that she repeatedly encouraged her husband to visit and take care of Ty, something abnormal in terms of marital life rules.

“I couldn’t keep Loc to myself because a woman like Ty deserved to be loved and cherished,” said Van.

Ty once again sacrificed her feelings to protect Loc’s family as she decided to move to Ho Chi Minh City to keep her distance from them, but Loc and Van would still visit her frequently.

In 1995, Ty retired and agreed to return to Bac Giang to be reunited with Loc and Van, making an unusual family where a husband and two wives lived under the same roof.

Yet their house was always full of happiness and laughter, which amazed people in the neighborhood.

Nguyen Duc Thang, the third son of Loc and Van, now 40, shared that he and his siblings truly loved Ty as if she were their biological mother and they were proud of their strange but happy family.

“My family is one of a kind and I’m lucky to have these amazing people in my life,” he said.

Ty later moved to another house nearby but Loc and Van still took good care of her and Thang’s little family also decided to stay with his second mother for the rest of their lives.