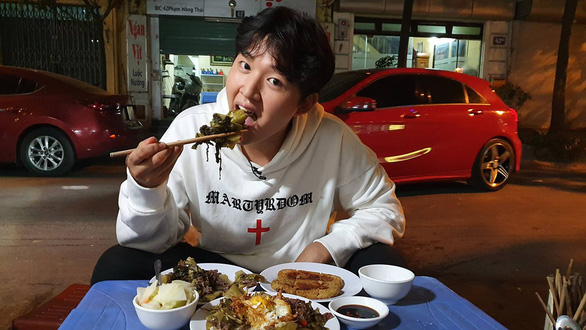 A South Korean man found his interest in Vietnamese cuisine from a very young age and decided to introduce them to viewers across the world via his YouTube channel.

Park Sung Woo, mostly known as Woossi, was born in 1996 in South Korea, but he grew up in Vietnam.

The young man had worked as a Korean interpreter for Vietnamese companies, making a good income, before he realized it would be much more fun being a YouTuber.

Wosssi decided to become a video blogger after he discovered his ability of talking in front of the camera when he joined a Vietnamese variety show in 2012 as the program’s TV host.

The South Korean man chose food review as the main theme for his videos, distributed on his YouTube channel ‘Woossi TV,’ as he has a passion for food and global cuisine, especially Vietnamese dishes.

At first the 23-year-old only made food review videos in the studio, a task that eventually became so monotonous that he decided to get outside to explore street food both in Ho Chi Minh City and across Vietnam.

“I realized that I had to step outside the box to attract more recognition from food lovers,” he said.

Woossi at first did not receive encouragement and approval from street vendors, but they later cooperated with him to produce the best quality videos introducing familiar as well as extraordinary dishes to Vietnamese and international fans.

Three years since its launch, ‘Woossi TV’ now has an enormous 1.4 million subscribers on YouTube, with videos featuring 580 Vietnamese dishes, including such bizarre food as ‘boiled guava’ and ‘stir-fried salt.’

Through his videos, Woossi also expressed his special love for Vietnamese cuisine due to affordable prices and an impressive combination of tastes from local herbs and daily products.

“Food in each region has its exclusive taste, but I prefer the dishes in central Vietnam,” said the South Korean food reviewer.

“When it comes to food, Vietnam is definitely a real-life paradise.”

Woossi had faced so much serious stress and pressure at the beginning that he even thought of giving up.

But he later got the strength to keep doing what he really loved thanks to the support of MisThy, a popular Vietnamese game streamer and also a close friend of his.

“I started to get more attention as she featured me in some of her game streaming sessions,” Woossi expressed his gratitude toward MisThy.

Woossi shared that a passion for work, a knowledge about balanced food and an awareness of environmental issues are his main priorities to be successful in this career.

He also hoped to produce more interesting videos in the future to win more love from ‘Woossi TV’ fans and promised to deliver the most natural food reviews as if he really came from Vietnam.

This story is the last part of our series on YouTube personalities who choose Vietnam as the main theme for their video works.