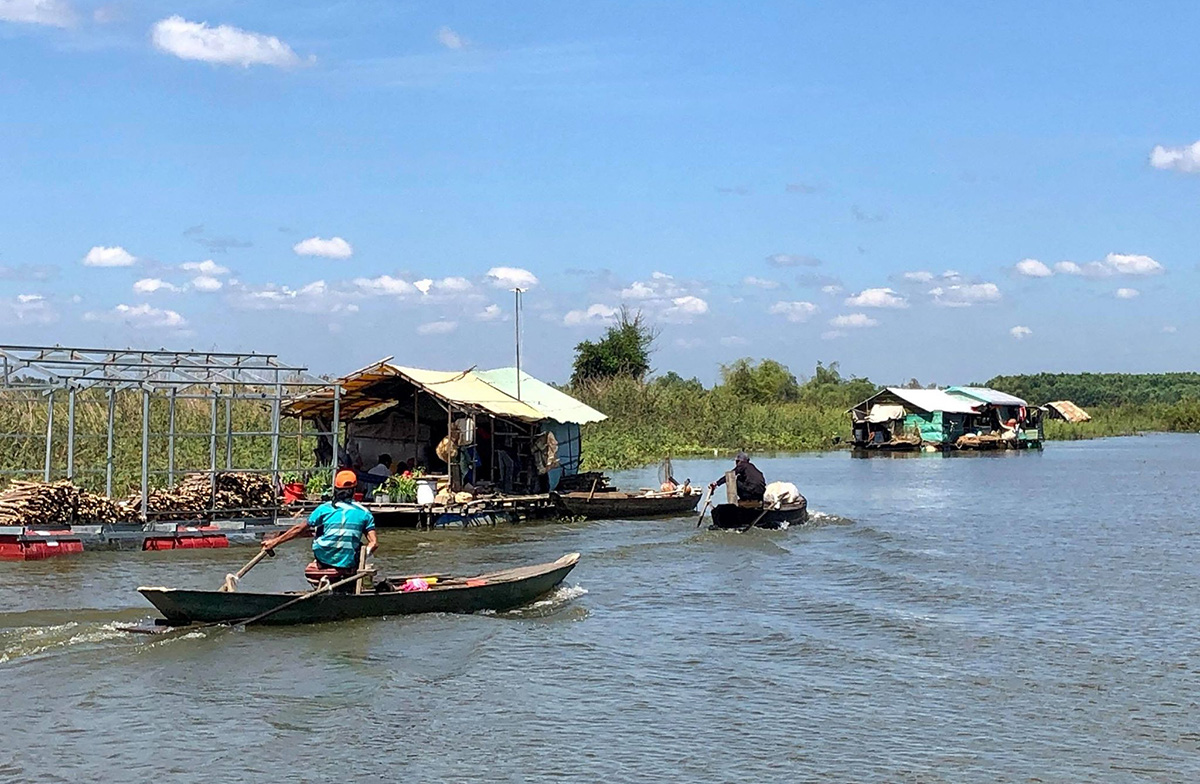 Dozens of Vietnamese households who moved from Tonle Sap Lake in Cambodia to a hydroelectric reservoir in the southern province of Dong Nai are finding it difficult to keep their heads above water.

The majority of the villagers are returnees from Tonle Sap, the largest freshwater lake in Southeast Asia, where they struggled to make ends meet as fishermen.

Now, after returning to their home country in the hope of building a better life, they are finding they have simply traded in a world of poverty for another.

Tip of the rod

A typical day for Nguyen Thi Loi, 56, begins at the local market where she sells off the prawns she was lucky enough to catch the night before. Most days her earnings are a meager VND80,000 (US$3.4).

“I don’t usually have much left after buying enough petrol for my boat to get to the market,” she explained.

Loi lives with her husband, three of their eight children, and a seven-year-old grandson on an eight-meter-by-four-meter raft shoddily built from planks of wood perched atop wooden poles.

The family has spent the past 13 years tiptoeing around the raft, trying to step as lightly as possible in order to keep the raft from collapsing. If it does, they will still be responsible for payments on the loan they used to build it.

It is not until recently when they gain access to solar energy for basic amenities.

A typical day for Loi and her family usually begins at 4:00 or 5:00 am, when they pull in the nets they cast the previous afternoon. After sorting their haul of freshwater fish, they set off to sell it at the market.

Apart from fishing, Loi also breeds fish. Her stock currently numbers approximately 1,000, but it will be a year before she is able to sell any of it.

Her meager income means she just does not have sufficient food to get the fish fat enough for the market.

Loi was among thousands of ‘overseas Vietnamese’ living on Tonle Sap Lake in Cambodia.

For generations, these Vietnamese would have fished the lake’s surrounding waterways. Their boats eventually became their homes. The isolated lives led by these Vietnamese meant their children were born with neither personal papers nor school, leaving them stateless.

As overfishing began to devastate Tonle Sap, they began making attempts to return to their home country, with many of them finding themselves on Tri An Reservoir.

For Loi, the plan had been to fish for a few years before switching to a new job.

Poverty, however, trapped her and her family on the reservoir.

Nowhere else to go

Most of those repatriated from the 15,000-square-kilometer Tonle Sap found themselves in the same position as Loi.

They dreamed of finding new jobs that would lead to reasonable incomes and access to education. Instead, they found themselves back where they started: living hand to mouth on floating homes.

Among her eight children, only Loi’s youngest son is able to read. Meanwhile, her seven-year-old grandson is unable to attend school as he has no birth certificate.

Her family is not the only one facing these issues. Her neighborhood in Thanh Son Commune alone is home to 52 households with a combined 150 residents, the majority of whom are returnees from Cambodia.

While some have attempted to move away and find other jobs, most simply do not have enough money to risk trying something new.

Nguyen Van Tho, or Nam Tho -- as his neighbors call him -- is a long-term resident of the community and one of the few who is not a repatriate.

He left Hoc Mon, an outlying district in Ho Chi Minh City, to put down roots on the reservoir 28 years ago.

“People from the Mekong Delta and Cambodia flocked to the reservoir because there were so many fish back then. My family followed suit,” Tho recalled.

At 62 years old, Tho himself still spends his days moving with the lake’s currents with his son, searching for schools of fish in its waters. His wife and three daughters work in a factory nearby.

“I have nowhere to go. I’m resigned to life here and can get by through fishing. I’m determined to have my son finish middle school so that he can fend for himself later,” he shared.

Meanwhile, Tong Van Rot, 55, came to the reservoir from Cambodia five years with his wife and eight children, hoping to leave the hardship of Tonle Lake behind.

Three of his daughters have since married off and live with their own families.

He and a group of fishermen now take a free adult literacy class held each week on a raft owned by a forest ranger, hoping to learn enough to make a better life for themselves.

The children of these returnees, most of whom have no birth certificate, typically face an uncertain future.

Nguyen Van Kheo, 21, shared that he and his parents arrived at the reservoir six years ago.

“I went to elementary school but dropped out a long time ago, so I’m not able to read or write properly,” Kheo said.

The young man wistfully said he wants to find a factory job on the mainland but is not sure he will ever have enough money to give it a shot.

The Mekong Delta region alone has over 8,000 ‘Tonle Sap overseas Vietnamese’ in 2,644 households, according to a 2015 count, with many more settling in provinces neighboring Ho Chi Minh City.