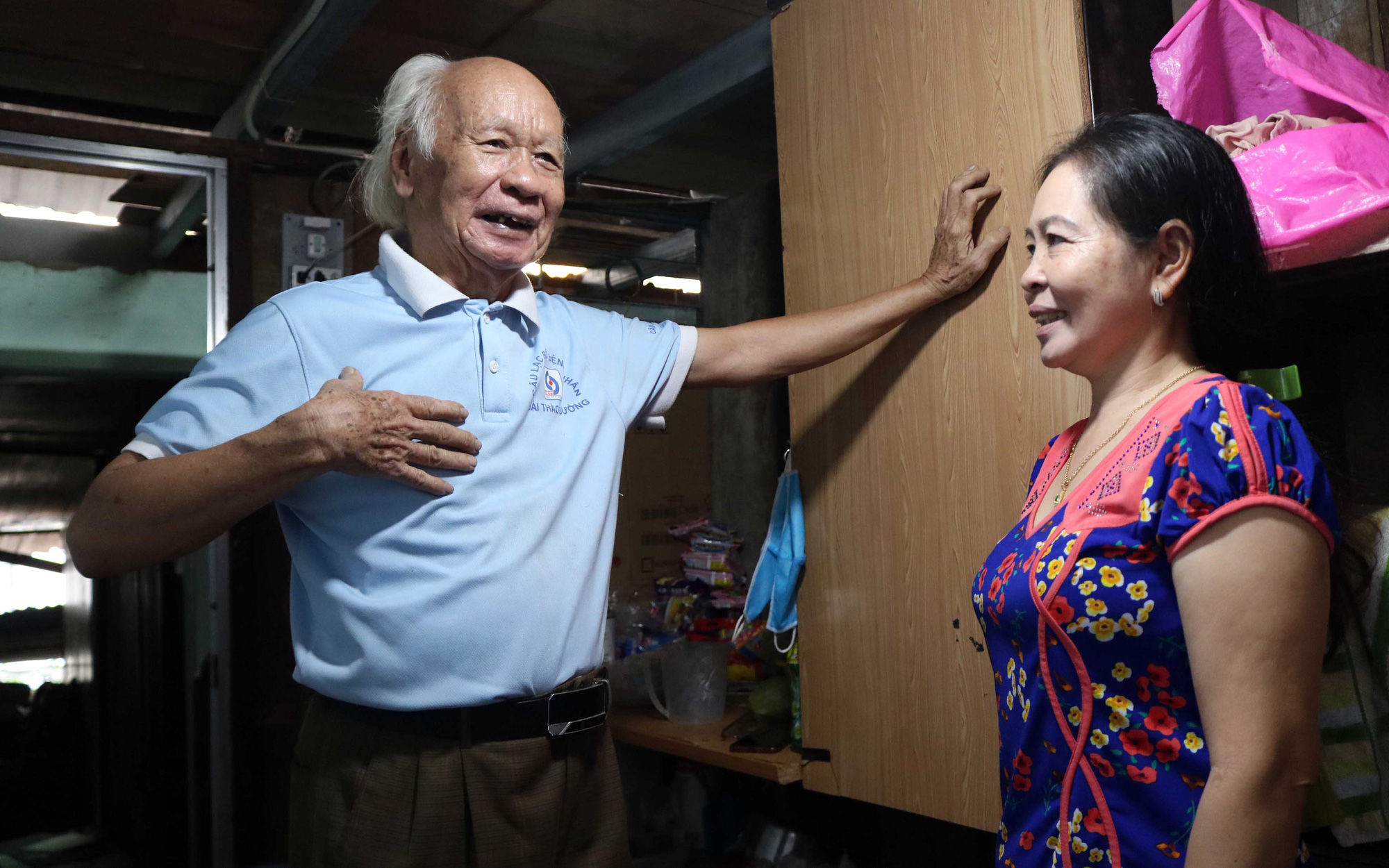 In Saigon, landlord runs ‘emergency fund’ for any dweller in distress

Over the last 30 years, Ho De, an 82-year-old man living in Ward 7 of Phu Nhuan District, Ho Chi Minh City has committed efforts to various philanthropic causes, including welcoming people to live on his property, waiving rent, and funding a financial safety net to protect working-class people who have none.

“At the moment, the apartments are a little cramped, yet I am still hesitating whether or not I should renovate them since the renovation would force those poor people [that I host] out on the street,” De explained as he toured the lodging of some 30 residents, most of whom are college students and needy people.

De’s block of flats is built on a 140-square-meter lot on Tran Ke Xuong Street, Phu Nhuan District and is subdivided into 24 housing units, providing all the basic facilities for its residents.

He is more than happy to waive the rent for anyone having it hard in life, from dishwashers to students, from the sick to the elderly.

He is always busy exerting himself in various tasks to maintain living standards for the residents, from obtaining a fridge for community use to fixing the leaky roof.

His story of aid started 30 years ago, around the Tet (Lunar New Year) holiday during the spring of 1986, when he visited a relative at the Ho Chi Minh City Oncology Hospital.

In the drafty hallway of the hospital, he encountered a woman lying on the ground, shivering from the chilly breezes.

He found out she was a cancer patient undergoing radiation therapy, but she could not afford lodging in the city.

A surge of compassion led him to offer the women a place to stay at his home for free.

In 1990, he met Nguyen Thuan and his family of seven who had sheltered under the stairway of the shabby Ngo Gia Tu apartment building in District 10 for years.

He found out the whole family, including the five children, had to sell lottery tickets to survive, while Thuan had also lost function in one of his arms.

He invited the family over to his home and took no rent until they could buy a house and move out. De also paid for the education of Thuan’s children.

After 20 years, the family finally accumulated some savings and bought a house of their own.

De offers free living spaces to college students and waives rent for those in deep struggle.

Living with De, the students have the chance to practice English and receive IT training from the proprietor.

He jokingly said that in order to enter the house, students have to pass a little English-speaking test from him, which has proved effective in finding good candidates.

At the end of the school year, students with good marks are not only entitled to a rent waiver but also receive a special gift from De; it can be an English book collection or even a personal computer.

De’s charitable work does not simply stop at providing shelter.

During his time helping the underprivileged, he became aware of all the times people were not able to respond to life’s adversities due to their financial restraints, from students approaching tuition deadlines to unofficial workers unable to afford tickets back home to visit sick relatives.

In an effort to help people avoid these issues, he established an 'emergency fund' available for any occupant in his building to take as a loan at any time with no interest.

Borrowers can pay back later, though people never see De solicit the amount he has originally lent.

Pham Thi Tam, a dishwasher at a street stall, has taken refuge in De’s lodging for the last three years.

She makes VND5 million (US$215) per month to live in the city and support her two children back in her hometown.

During the COVID-19 crisis, she was unable to earn any money. The sole lifeline for her at the time was the charitable aid from De.

“When I had nothing on me except for the rent waiver, he pressed some money in my hands so I could afford food,” Tam recalled.

Tam was not the only one receiving aid from De at the time. On top of rent and bill waivers for occupants on his property, he distributed a total of VND43 million ($1,850) to affected workers in COVID-19 and people in the Mekong Delta hit hard by saltwater intrusion.

De takes pride in the fact that he has been able to pay for ten weddings using the emergency fund.

“The cost of a wedding might be overwhelming to people in need. Many of [my tenants] pick me to be their surrogate parent as they do not have a supportive family, so I use the emergency fund to help them,” De said.

Each summer, De stocks essentials including rice, instant noodles, and spices in his house to welcome some ten students in for a free stay during their preparation for the once-in-a-lifetime tests.

When the occasion calls, De does not hesitate to reach out and seek solidarity in his community.

Residents of Civil Group 102 from Ward 7 in Phu Nhuan occasionally remind one another of the flooding that happened there a few years ago: water levels rose as much as half a meter, obstructing people’s daily lives.

After reporting to the ward leaders, De went around the neighborhood to solicit donations and pooled a total of VND100 million ($4,308) for sewage system renovation, putting an end to the issue.

He is also a regular financial backer for the Association for Promoting Education, the Women’s Union, the Red Cross Society, and other local humanitarian causes.

De gained respect and trust from the local community over his tireless dedication to solve public issues.

“I only know one thing for sure: what I do makes others happy, so I feel blessed too,” De said.