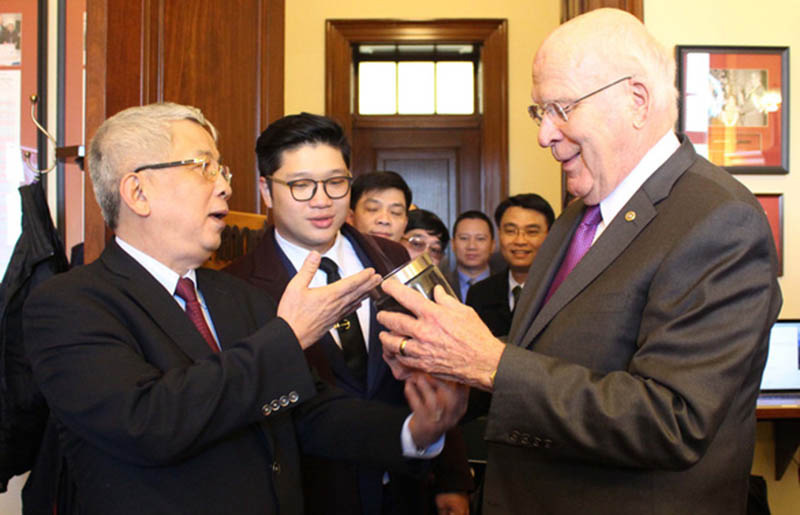 After the normalization of bilateral relations between Vietnam and the U.S. in 1995, post-war issues remain a sensitive topic.

>> Part 3: The ‘ambassadors’ of education

In response to the ardent support by Vietnam for the repatriation of American prisoners of war/missing in action (POW/MIA), the United States has shown good faith and dedication in resolving the legacy of the war, including issues relating to unexploded bombs and Agent Orange — the heavy-duty poison that the U.S military sprayed in Vietnam which caused long-lasting health issues to those exposed, as well as their descendants.

According to former Vietnamese Ambassador to the United States Nguyen Quoc Cuong, resolving the war legacy has become one of the biggest aspects of the Vietnam-U.S. relations over the last decades and also an issue that highlights the ability of the former enemies to reintroduce themselves to a state of friendship and partnership.

'The best ever ambassador'

“It is remarkable how a tiny program we started 25 years ago to help a few people walk again, turned out to be the catalyst for tackling one of the most difficult legacies of the war and, in the process, built a whole new relationship between two former enemies,” said U.S. Senator Patrick Leahy, who contributed to the tackling of war legacies in Vietnam from the American side.

Leahy first came to Vietnam in 1996 to meet with stakeholders and discuss a compromised resolution for unexploded ordnance in Vietnam.

He continued to visit Vietnam several times after being elected president pro tempore of the United States Senate in order to promote efforts aimed at dealing with the war legacy.

Leahy’s effort to support persons with disabilities (PWDs) in Vietnam started during the presidential term of George H.W. Bush.

During his tenure as Vietnam’s ambassador to the U.S. from 2011 to 2014, Cuong encountered Leahy and heard an emotional story on his humanitarian aid journey in Vietnam during a ceremony held to celebrate sending wheelchairs to victims of unexploded ordnance.

One of the victims at the event asked to be lifted into the wheelchair and the U.S. senator agreed. The man then pulled Leahy close and thanked him.

“Patrick Leahy said what the Vietnamese man did was a moment he could never forget,” Cuong said.

This story was brought up again when Cuong visited Leady to bid farewell at the end of his term as ambassador.

There, Cuong was called a distinguished ambassador of Vietnam by the U.S. senator.

“At that moment, I thanked him for the advice and encouragement, yet I referred to the amputated man who wrapped his hands and said thank you to him as the best ever ambassador of Vietnam to the U.S. He turned emotional, shook my hand, and confirmed that I was right,” Cuong recounted.

Senator Leahy established a good rapport with Nguyen Thu Thao, former Vietnam country representative of the Vietnam Veterans of America Foundation (VVAF), thanks to their shared concern about dealing with war legacies in Vietnam.

Such an issue was put forward in Leahy’s speech at the U.S. Senate on September 16, 2010, where VVAF was exalted as an indispensable leading figure in the American effort.

The work to mend these wounds of war came into Thao’s life in a truly advertent way: right on her wedding day of November 17, 2000, she saw the televised speech of then-U.S. President Bill Clinton at Vietnam National University, Hanoi.

He was the first U.S. president to visit Vietnam during the post-war era.

“We are eager to increase our cooperation with you across the board. We want to continue our work to clear land mines and unexploded ordnance,” Clinton said as Thao listened.

Circa the time of Clinton’s visit, the 1997 Nobel Peace Prize–winning organization VVAF launched a series of surveys on unexploded ordnance in cooperation with Vietnam’s Ministry of National Defense.

Curious about the VVAF mission, she decided to apply to the foundation despite working well as an ethnic minority program officer of the United Nations Development Fund (UNDP) at the time.

“Although having limited knowledge on ordnance remains in my homeland, [I hoped] joining this project would help me see the legacies of the war in Vietnam from a different perspective — from the other side and the trauma it left on American society,” Thao said as she recalled her motivation to apply to VVAF.

In 2004, Thao went on to pursue her studies in America as a Fulbright scholar, keeping only one goal in her mind: any school is great as long as it is in Washington D.C., where the VVAF is headquartered.

Thao worked at the VVAF headquarters during the day and attended school at night. She was also tasked with accompanying Bobby Muller, the VVAF president, in meetings with political figures and local scholars, as well as hearings on Vietnam-related issues at the U.S Senate and House of Representatives.

After a year and a half in America, Thao concluded her work and returned to Vietnam. In 2006, she was contacted by Bobby Muller and commissioned to establish an Agent Orange impact-correcting program in Vietnam.

Thanks to the support of Leahy and his assistant Tim Rieser — a person with more or less affinity for Vietnam, the United States in May 2007 pledged US$3 million to correct the environmental and health damage in Agent Orange-struck territory across Vietnam.

The United States has so far invested over $100 million in the detoxification of Da Nang airport in the namesake central city and committed another $300 million to clean up Bien Hoa airport in the southern province Dong Nai.

On top of that, the U.S. has provided $125 million to support programs for PWDs in Vietnam since 1989, having impacted over one million individuals.