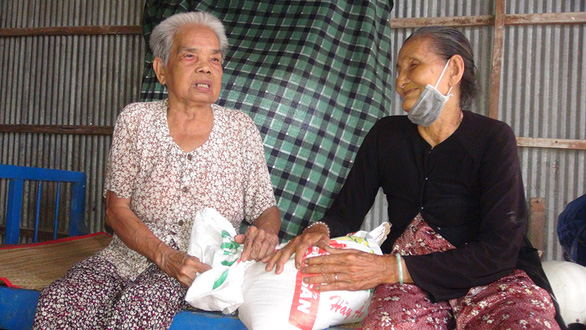 At 80 years old, Nguyen Thi Be has no plans to step into full retirement. Instead, she plans to live out her days in Binh Trung Village in An Giang Province by selling vegetables to raise money for her neighbors in need.

Be often spends her afternoons picking veggies from her neighbors’ fields. Amongst her favorite are water spinach, sweet potato leaves, Asiatic dayflower, and young banana trunk.

But the money she makes for selling these vegetables is not for herself, it is for her neighbors.

“I used to sell water spinach and young banana trunk salad to make ends meet and provide for my children. Now, selling these foods is how I do good deeds for others,” she said.

Be sells the vegetables she picks from her neighbors’ land at a local market, about one kilometer away from her home which she travels to by bicycle.

She also distributes fruits for her neighbors as well.

On some mornings, the fruits and vegetables she sells bring her about VND60,000 (US$2.59) in profit.

“I will use the money to buy rice for my neighbor, Mrs Thai,” she said.

Be became her family’s breadwinner after her husband’s death. She was able to send her children to school by growing and selling vegetables.

Now, all her children have jobs and send money to support their mother.

When a serious illness sent her to the hospital several years ago, Be became inspired by fellow patients and resolved to spend her remaining years doing charity work.

“I put myself in their shoes and it made me feel like I needed to help those around me and ‘pay it forward,’” she said.

“I started by things that I know very well – selling veggies,” Be added.

“The profit is used to buy food and medicine for old and ill people. Going to the market daily and talking with customers allows me to learn who are in need of help.”

Be’s good deeds have caught the attention of her family and neighbors, many of whom offer her limes, chillies, and banana trunks to sell.

Tran Thi Thai, 78, is one of the many neighbors whose lives have improved thanks to Be.

According to Thai, Be has helped her overcome the difficulties of living with several diseases.

“I am very grateful to Be, I don't know how to repay her,” she said.