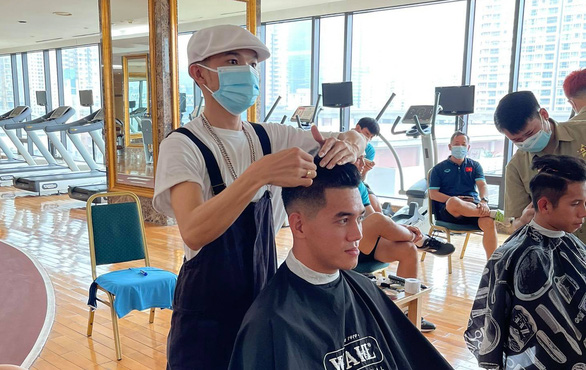 Born in a village in the central Da Nang City, Nguyen Khac Ly’s success in the hair industry is an inspiration for his neighbors and friends.

But while many people look at Ly and simply see an entrepreneur, those who know him well understand the difficulties he faced during his rise to the top.

From apprentice to afficionado

After finishing high school, Ly found himself at a dead end. His grades were not good enough for college and he simply did not have the money or know-how to start his own business.

As a result, he found himself eking out a living by collecting and selling acacia bark.

At home, his family began pressuring him to learn a trade.

“The only two feasible options my son had to earn decent money were barbering or sculpting,” said Nguyen Thi Nga, Ly’s mother.

“My son isn’t very big, so we didn’t want him to do anything too physically demanding.”

At the end of 2014, Ly found a barbershop in Da Nang that was willing to take him on as an apprentice, but he soon became frustrated by the unpredictable earnings and dated hairstyles.

He decided to go his own way.

“I searched the internet for trending hair styles and taught myself more about Western barber styles,” he said.

“No one in Vietnam was doing that. I knew if I mastered the [western] techniques, I could make a name for myself.”

Soon, Ly was spending all his time cutting wigs using YouTube as his teacher.

“I thought he was in love,” his mother said, “but it turned out he was just watching haircut videos in the dark.”

The road to success

Ly eventually graduated from wigs to real people, using his friends and the kids in his village as ‘guinea pigs’ to try out new techniques.

Before long, he opened his own barbershop in the middle of his village and began showcasing his work on Western-style barber social media groups.

In 2015, his work soon caught the eye of a local fashion expert who encouraged him to sign up for a two-year vocational training program in Hanoi.

After that, it was time for Ly to set out on his own.

“I was able to earn about VND180 million [$7,820] by offering training to applicants I found on hairstyle internet forums.

“I used that money to rent a place on Nguyen Khac Can Street. Six months later, the training program ended and I had my first team of barbers.”

As time went on, Ly’s reputation grew and grew. He soon caught the attention of social media users in other countries and was invited overseas to showcase hair styles on television talk shows.

He was also chosen as a technician and trainer for an American hair trimmer and asked to travel around the world presenting barbering techniques.

During this time, he expanded his barbershop franchise to Da Nang and began accumulating thousands of followers on Facebook.

To date, he has successfully trained 350 people and hosted thousands at his various training sessions and workshops.

Ly has had dozens of celebrities sit in his chair.

Notably, the Vietnam’s National Football Team had him visit their hotel to give haircuts ahead of their World Cup 2022 qualifying matches.