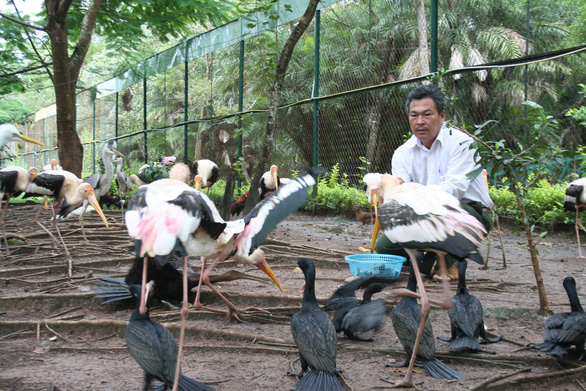 For 30 years, an aviculturist has helped to build and restore aviaries in the Mekong Delta provinces of Vietnam. From the first attempt at drawing birds over, he has turned bird raising into his lifetime career.

Birds of all kinds were roaming an area of the Vi Thang melaleuca forest in Vi Thuy District, Hau Giang Province.

Herons, darters, gallirallus, and many more were making loud noises as they flung themselves into the foods from the aviculturist – 62-year-old Le Danh Cuong.

Birds in the wild

One morning in the Vi Thang forest, the birds were crowding the place, sending a hustling aura over all those present.

Certain ‘strangers’ showed up, appearing as confident as the locals.

In response to the fish crumbs for breakfast, the birds seemed nervous and were keeping the bird raiser at arm’s length.

When they saw Cuong, however, they came down like ducks to water.

Some well-built members were quick to snatch the better bites, leaving the weak standing on the side.

Cuong was well aware and briskly scattered more food for ‘the miserable.'

“In the bird world, there are the strong and the weak, the villains and the bullied,” said Cuong.

“The newcomers often have a hard time getting a good bite, but soon they will mature and will even pick on the older members.

“If this is not seen to, the weak birds will get hungry and may leave due to frustration.”

The local birds made friends with others from faraway places during their regular trips.

It is interesting to see all these visitors coming home with the birds nesting in the Vi Thang forest.

The birds were so overwhelming their numbers that the indigenous people had to switch their types of trees, lest the birds may destroy all the melaleuca available.

Once they have established their territory, the birds act as king of the Vi Thang forest. However, they listen to Cuong.

The bird keeper sometimes saves their lives. He provides them with food, shelter, and healthcare.

For the last 30 years, the birds of the Mekong Delta in Vietnam have gotten so used to the image of the person who feeds and protects them.

They must be in debt to him as he gave them a home when they almost lost their places.

From soldier to professional aviculturist

Cuong was a soldier in the war against the Pol Pot regime in Cambodia and on another battlefield in the north of Vietnam afterward.

In peacetime, Cuong was assigned a post at Lam Vien 19-5, a small forest located in the heart of Ca Mau City on the southern tip of Vietnam.

It was this stopover that gave him the chance to connect with the birds.

At that time, Lam Vien 19-5 was managed by Le Thi Lieu, whose husband Pham Huu Liem was head of the department of forestry there.

They were both born and bred in wartime and have dreamed of a way to make their local culture and nature known to the younger generations as well as tourists.

They chose the bird enclosure as their point of focus as it signified the uniqueness of the place.

A bird cage in the middle of the town was built. Amid public doubt and pressure, Lieu and Liem managed to realize their passion.

It was a struggle, but Lieu had a supportive team, including her lead aviculturist Cuong, who made sure her efforts become the home to wild birds.

Part of their plan was to tame an initial group of birds, which will then be released back into the wilderness.

These first-generation members somehow ‘marketed’ their habitat and lured other wild birds over.

As the new birds found this place a comfortable zone with available food sources, they themselves called more over, creating a snowball effect.

Very soon a considerably large number of birds were making their nests.

Cuong burst out in tears when he first learned that wild birds were coming to his aviary.

This gave him confidence that their team can turn the forest nearby into a potential natural habitat.

Lieu sent Cuong on a field trip into the forest. There, he was studying the birds and guarding them against bird thieves.

More and more wild birds popped up, but Cuong considered all of them his family members.

He could get close to them without inflicting any sense of doubt or fright.

“You have to love them, then they’ll come to you,” he said.

As the time went by, Cuong got attached to the wild birds without realizing it.

He could even intuitively count the birds. He should know if a single one of them does not make it home on any random day.

Thanks to the bird population, Lam Vien 19-5 has attracted large influxes of tourists and news coverage.

Pham Thanh Tri, former president of the People’s Committee of Ca Mau Province, recalled that the provincial high-rank officials made time to escort VIP guests around the bird sanctuary every time.

The authorities in Tien Giang Province contacted Tri and asked for expert help in establishing a bird shelter in the Tan Phuong melaleuca forest there.

“I thought that they really wanted to do it, so I sent Cuong to help them,” Tri said.

It was a mystery what Cuong did there, but not long afterward Tri got a thank-you phone call from the Tien Giang authorities, saying they had successfully put together an aviary full of wild species.

“It was great to hear that. I went there once. The birds were everywhere,” he said.

Cuong’s fame spread. He traveled here and there to build more aviaries.

He came to Bac Lieu City under Bac Lieu Province to restore an old enclosure.

From there, he came to Vinh Long Province to make an aviary inside a fruit plantation, at the request of the owner of the Vinh San tourist area in this province.

This time was a real challenge, but he followed the call and everywhere he went, the birds were after him.

Cuong was most pleased with the one he built in the Tan Lap Floating Village in Long An Province.

It was a naturally rich area with lots of birds. It could be called the bird capital.

Following that, he went on to work at a forest in Vi Thang at the request of a big corporation.

“Tri and other passionate bird lovers have appealed to the provincial leaders in paper. They have sought permission to restore three legendary bird enclosures, namely Cha La, Dam Doi and the Ca Mau City aviary,” he said.

“Tri said that they had got the green light.”

For three decades, Cuong has no idea whether the birds have been following him, or vice versa.

His life has been tied to the tireless wings.