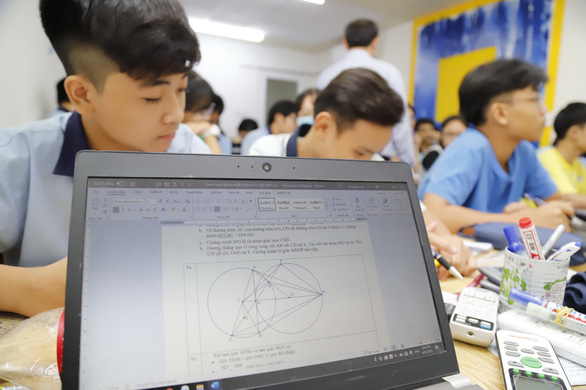 With the high school entrance exam over two months away, final-year students at middle schools in Hanoi and Ho Chi Minh City are cramming for the test in back-to-back extra classes, hoping for a good performance in the pivotal assessment.

The high school entrance exam, held every year around June for ninth-grade students as well as independent candidates, acts as a standardized placement test for high schools in the two cities' K-12 system.

The exam is deemed pivotal for middle schoolers there, as it is still believed by Vietnamese parents that a slot at top schools is a golden ticket to future success.

Coupled with the immense peer pressure from classmates, middle school students feel the need to fill their schedule with extracurricular classes to avoid being left behind in the placement race.

Five in the morning

This year, ninth graders in Hanoi are fraught with concerns as a myriad of changes have been introduced in the upcoming high school placement test.

Around 91,000 students are expected to sit for the exam in the Vietnamese capital in 2021, but public high schools there only announced around 60,000 slots, according to reports from local news site VnExpress.

Roughly one-third of the candidates will have to settle for private schools, vocational schools, and further education facilities, which are often considered inferior and low-quality by Vietnamese parents.

Compared to the 2020 test, which only includes math, literature, and foreign languages, the 2021 high school entrance exam will assess students’ knowledge of one more subject, namely history.

The rather unexpected addition came as displeasure to many students who now had to squeeze time in their already tight class schedule to catch up on history lessons.

Ha, a parent in Hanoi’s Hoang Mai District, said her ninth-grade child has signed up for an extra history class taught by a professor at the Hanoi National University of Education.

“The class started in April with ten students, but its count has gone to around 30 now,” she reported.

While some parents anticipate the history test to be less challenging as it was not a K-12 staple like the remaining three, others are worried that it could still drag the total average score of their children down, Ha said.

“A difference of as nominal as 0.25 points in the total average can decide who gets the spot,” she remarked.

Huong, another parent in the capital whose child is attending Trung Hoa Middle School in Cau Giay District, said she recently had to send her child to a history class on his only free evening on Sunday, as his evening schedule through the week was already filled with literature, math, and English classes.

As Huong revealed, she also signed her kid up for a ‘special’ math class of a purportedly good teacher, whose schedule is so tight that the only time she can teach Huong’s child is between 5:30 am and 7:00 am in the morning.

“The shift is reserved for those who have personal connections with the teacher, as well as kids living near her house," the mother divulged.

"It starts with around 15 students, but about half dropped out due to the inconvenient hours.

“In order to attend the class, my kid has to wake up at 5:00 am and then bicycle a few kilometers to the teacher’s house.”

As these students’ timetable is tighter than ever, several private tutoring centers in Hanoi, who have after-hours classes for all four subjects of the high school entrance exam, have opened catering services to the desks so that their students can sit through several lessons without having to move.

Such services are also meant to help students who travel from school to tutoring centers, or vice versa, to save time, as they no longer have to drop by along the way to search for food.

Each subject requires two or three lessons per week.

A two-month tutoring course at these centers can cost as much as VND20 million ($871) per student, meals and service fees included, parents said.

That is not to mention the fees from extracurricular classes organized by the school of the student, which drive up the financial pressure even further.

Meanwhile in Ho Chi Minh City, where students will sit for tests on math, literature, and foreign languages, many intensive prep classes for the high school entrance exam have popped up since mid-April.

Mai, a parent in District 3, said she feels obliged to send her ninth-grade child to after-hours classes, even when the kid is already attending prep sessions for the upcoming placement test at school.

“I signed my child up for math and literature classes run by two well-known teachers in the city," Mai said.

“Students registering for these must take an entrance exam and only those who score eight [on a 10-point scale] and above would be admitted."

Hung Anh, a ninth-grade student in Tan Binh District, said he had attended extra classes since the start of the school year back in August 2020 to prepare for the high school entrance exam.

However, he was pressured into attending literature and English classes as well, as all of his friends are doing all three subjects outside of school.

For the moment, Anh’s schedule is chock-full throughout the week, even on Saturdays and Sundays.

“I do three shifts every day: lessons at school in the morning and afternoon, plus the extra classes in the evening," the student said.

"Sometimes, I have to do four, with another shift at night-time."

For students, intensive classes can be a double-edged sword, according to Nguyen Duc Tuan, a math teacher in Ho Chi Minh City.

“It will work with students who already have solid foundation knowledge and are looking to hone test-taking skills,” Tuan said.

“For those who take too many classes to the point that knowledge can’t 'be absorbed’ into them, intensive classes will do no good.”