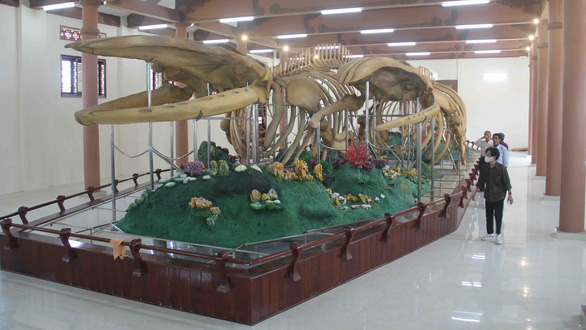 After nearly 300 years, two whale skeletons in Quang Ngai Province, central Vietnam have been restored and put on display for public view.

It is common practice amongst Vietnamese fishermen to store the skeletons of whales that washed ashore in temples.

There, locals worship the bones of these massive sea creatures.

In Ly Son District, a string of islands off the coast of central Vietnam, two of these skeletons were recently completely restored for a public display.

Fishermen in Vietnam call whales ‘grandfather fish,’ implying that they are of a high status.

In Ly Son, an area which holds whales in particularly high regard, locals are excited for their two recently restored whale skeletons to be put on display.

“Very soon everyone will get to see the grandfather fish at the Tan temple,” said 79-year-old Pham Thoai Tuyen.

According to Tuyen, whales only rest in peace where people have spiritual faith in them, thus Ly Son is an area of peace.

“Fishermen have reported being saved by whales during storms after their boats sank in the middle of the sea,” Tuyen said

“That’s why the local people believe that when a whale’s corpse drifts to an island, that place is blessed with security and affluence.”

It is because of such beliefs that Ly Son islanders have built seven whale temples along a 4-kilometer coastal road, each with stunning views of the sea and ten whale skeletons.

The two oldest whale skeletons are kept in Tan Temple and date back 250-300 years.

They have been named The Great Dong Dinh Emperor and The Two Fish Gods.

These skeletons are so sacred that the temple only opens to visitors once a year on the 20th day of the twelfth lunar month.

When a whale’s body washes ashore, locals rush to the beach to usher it inland.

The first person to witness the body is called ‘the eldest son’ during the whale’s funeral ceremony.

Only after a whale corpse has been on shore for 5-7 years is its skeleton moved to a temple.

Each temple is managed by a keyholder, an elected position with a three-year term.

According to Pham Van Trai, the keeper of Tan Temple, many of the skeletons at the temple are in such a state of disrepair that they cannot be worshipped.

Countless skeletons at the temple are kept in trunks because they have become so damaged over the years, despite people’s efforts to keep them in good conditions.

Some of these damaged skeletons measure up to three meters in length.

The two recently restored skeletons, measuring 28 meters and 22 meters in length, at Tan Temple are supported by metal frames that resemble the shape of a swimming whale.

It took dozens of technicians over two months to restore the skeletons. Meanwhile, Trai and Thieu helped build the metal frames.

The Great Emperor is among the largest whale skeletons in Southeast Asia, Trai claimed.

“We have a plan to turn the display area in Tan Temple into a visiting space for tourists to the island.

The legend of the Great Emperor

The legend behind the Great Emperor is well known on Ly Son.

A long time ago, local people spotted a dead whale at sea and were quick to drag it inland.

Hundreds of strong men attempted in vain to pull the whale’s carcass through the surf.

Seeing this struggle, elders on Ly Son organized a worshipping ceremony and made offerings to the Great God of the Southern Sea.

The god responded and sent a great wave to push the corpse ashore.

“Since then, the whale has been a mascot for the East Vietnam Sea,” said Tuyen.

“It has saved a great number of seagoers.”

Before their restoration, the relic records reveal that the two restored whales measured 30-35 meters in length.

Dang Trung Hieu, a technician who participated in the restoration of the Great Emperor and the Two Fish Gods, said many of the bones were so damaged due to humidity and high temperatures that several parts had to be made from plastic.