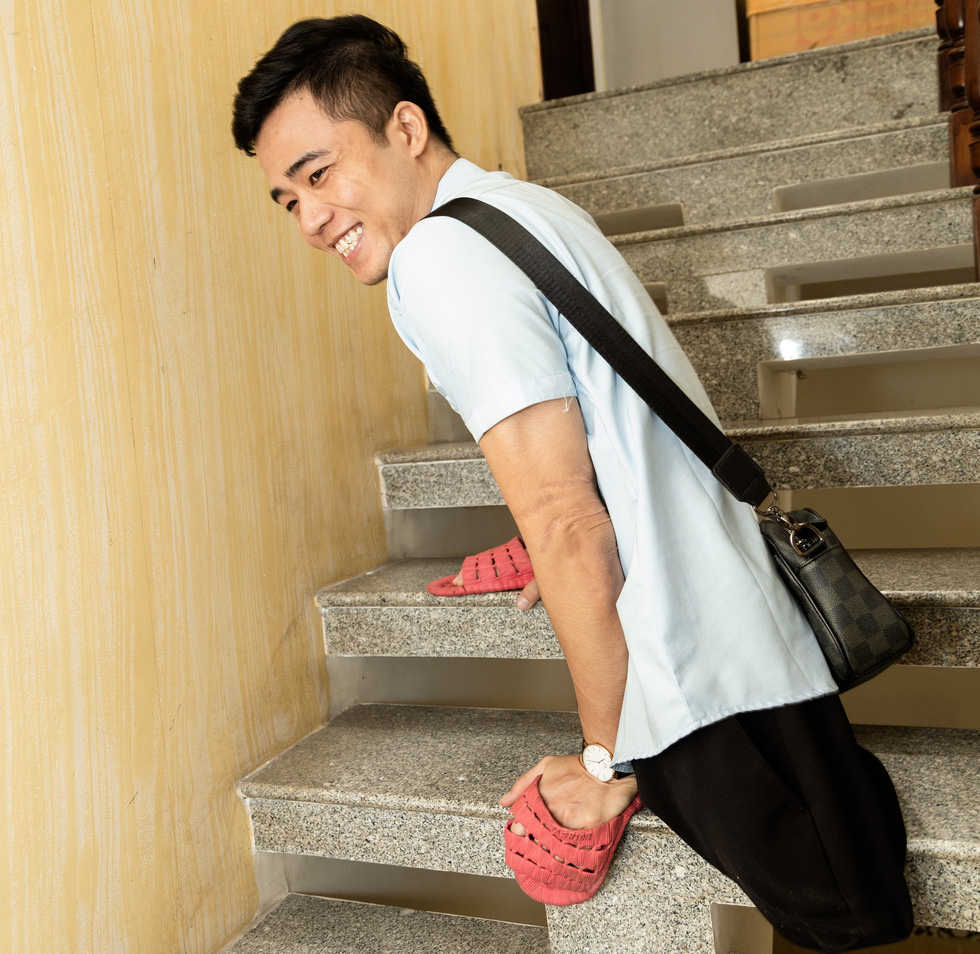 He’s escaped death twice, now he uses his experience to inspire others around the world

After a blood clot in his abdomen leg forced him to amputate both his legs, To Dinh Khanh, 29, took it upon himself to lead a life focusing on positivity and inspiring others.

Khanh had a typical Vietnamese countryside childhood in Dak Lak Province in the Central Highlands region.

He spent his mornings helping his family cut stones to sell to construction projects and his afternoons and evenings peeling cassava.

“Cutting stones was certainly difficult, but my father still worked hard despite having a health trouble, so I always did my best to help,” Khanh shared.

Rather than go to a university, Khanh found a job after graduating high school.

“My family was facing financial issues. We only had noodles, soup, and vegetables from our garden to eat, but I was never upset.

“Actually, it was one of the best times of my life because my family was able to be together. I figured I could stay home and help my parents, then go to university later,” he said.

Inspired by friends who had traveled across the country and returned home with fantastic stories, Khanh decided that the best way to help his family escape poverty was to leave his hometown and build a career for himself elsewhere.

“I went to Saigon in 2017 with a plan to learn and build an online business,” Khanh shared.

But while Khanh’s income steadily rose, his health quickly declined.

It started with a pain in his leg after exposure to contaminated water, and then grew to a mild numbness in the lower half of his body, and eventually to swelling and kidney problems.

However, Khanh maintained his optimism that everything would be fine until one day, out of nowhere, his legs went totally numb and he was unable to continue his work.

The next several days were spent traveling among hospitals, but doctors at each hospital he visited seemed hesitant about taking action.

“They all said that my last chance was at Cho Ray Hospital, but [Cho Ray Hospital] said it couldn’t accept me because it was full. I was really stuck,” he recalled.

Fortunately, not long after, Cho Ray Hospital contacted Khanh and informed that a bed had opened up.

It was a ray of hope.

The will to live

At Cho Ray, doctors explained to Khanh that he had a blood clot in his abdomen that had blocked a blood vessel and caused his legs to become necrotic.

The words that stood out most to Khanh were “surgery” and “amputate.”

Although Khanh had already mentally prepared for the worst, he was in a state of shock.

“It’s urgent! We have to amputate. There is no other option,” they told him.

Khanh was both terrified at the prospect of losing his legs, but optimistic thanks to images he had seen of other people with disabilities leading normal lives.

He then called his parents to let them know that the next time they saw him he would have no legs.

The night before his surgery, Khanh recorded a short video of himself saying his last words in case the surgery did not go well.

At 6:00 am the next morning, he was taken to the operating room.

His last thoughts before being put to sleep were about himself willing to live through the surgery so that he could once again see his parents.

Fortunately, the surgery was successful.

The first thing Khanh did after waking up was to reach for his legs, only to find two large cotton balls affixed below his knees.

Tears welled up in his eyes and he soon fell asleep, exhausted from both the emotional and physical toll of the surgery.

Khanh was once again hit with bad news just a few days later: the joints on both his legs would have to be removed as well.

This surgery, doctors said, had an even lower survival rate than the first. Khanh’s parents were told to prepare for his funeral.

“You have to hang in there. Your dad and I and everyone here loves you and will be waiting for you,” his mother told him as he prepared for surgery.

Khanh once gain reaffirmed to himself that he would survive.

And survive he did.

Khanh decided to break up with his girlfriend following his surgery, but has since remained close with his former partner.

According to Khanh, his personal concept of ‘happiness’ has gradually changed since his amputation.

“Right now, to me, happiness means being able to live with my parents, being an inspirer, spreading positive values ​​to others, and reading thank you notes from people on social media.

“I still believe that true love will find me someday when it’s time,” he shared.

Khanh has turned his tragedy into a social media success.

He currently boasts over 300,000 followers and five million views on social networking platforms, where he uses his reach to share meaningful stories and messages to people around the world.

He was also recently awarded a full scholarship to an English center, which he hopes will help him achieve his dream of raising his family out of poverty.