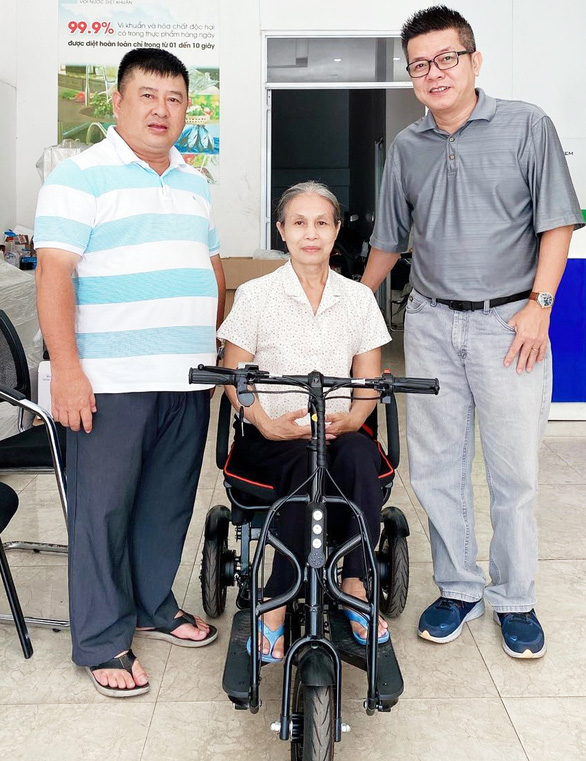 “I want to assist handicapped people so that they can move around more freely without having to rely on others," Nguyen Leo Long, a Vietnamese American who frequently returns to and stays in Vietnam, said, starting his story of offering wheelchairs to people with mobility impairments.

A few months ago, Long and his friends visited Phu Dong Commune, Tan Phu Dong District, Tien Giang Province in the Mekong Delta to present gifts to the disadvantaged.

Among the throng coming to receive the gifts was one woman arriving in an electric wheelchair.

From a sad story

That woman, named Hoa, is an orphan. She lives alone in a tiny cottage situated amid a vast rice paddy.

Hoa, who has no legs, still strove to open a small grocery store, selling several necessities to make ends meet.

After saving up for a while, Hoa was planning to buy herself a wheelchair so she could stop using her hands to move around like she had for most of her life.

Then, another tragic fate befell her.

A man came into her life, prompting Hoa to believe that he was the one sent by God to her, the one that she could take refuge in. But what happened was contrary to her expectations.

The man swindled her out of all her savings, leaving her dream of owning a wheelchair shattered.

Hoa said that there were times thoughts of death came into her mind as she wanted to escape this bitter reality.

Fortunately, she met priest Minh Phung, chief of St. Paul Parish, who invited her to his church to find happiness with the local parish, instead of staying at home and being depressed.

Hoa had a certain fear of crowds and a complex about her leg impairment. She did not promise to join them, but one weekend, she changed her mind and asked her relative to take her there.

After hearing her story, people at the church worked together to buy her an electric wheelchair.

Since then, Hoa has been no longer confined in her little cottage with her hands always dirty with soil.

Her story touched the heart of Long, who then decided to offer electric wheelchairs to the disabled.

This decision received much support from his younger siblings and friends.

The first ten wheelchairs shipped to Vietnam were given to ten disabled people, including two residents of Phu Dong Commune.

“There are up to 60 letters sent to me saying that they want to get a wheelchair," Long said.

"We will try to offer them wheelchairs to the best of our ability,”

“One of the two recent recipients of the wheelchairs suffered a stroke and has been bedridden over the past four years," said priest Minh Phung.

"Her dream was simply to be able to move out of the house, and see the sky and her neighbors.

“After she received the wheelchair, she also wants to join others to do little yet meaningful things for our society.”

The wheelchairs were transported further to Quang Ngai and Nghe An Provinces in central Vietnam.

Son Lam, a local man in Hung Thanh Commune, Yen Thanh District, Nghe An, was born with a disability.

His limbs are curled up and have become weak over time. His homemade wheelchair was aging and usually broke down, making his daily life more difficult.

Long expressed his growing admiration for Lam, saying that despite having a limb impairment, Lam learned to repair TVs, fans, and opened a small repair shop in his hometown for a living.

After receiving an electric wheelchair from Long, Lam made and posted a video on his YouTube and Facebook accounts to express his happiness.

The electric wheelchair donated by Long enables Lam to travel further and record more videos introducing his hometown to viewers.

On his Facebook account, Long shares simple stories conveying messages of love and always expresses his thanks to his friends who have teamed up with him to offer wheelchairs to the needy.

Trips to many parts of Vietnam

Over the past few years, Nguyen Leo Long has implemented a program providing clean water to those in need in many regions across Vietnam.

On the 13th of every month, Long and his Thong Vi Vu choir, along with generous donors, offer hundreds of gifts to disadvantaged people in Ho Chi Minh City.

As for the upcoming months, this choir will travel to other provinces such as Binh Thuan, Kon Tum, and Quang Tri to present gifts to underprivileged people.