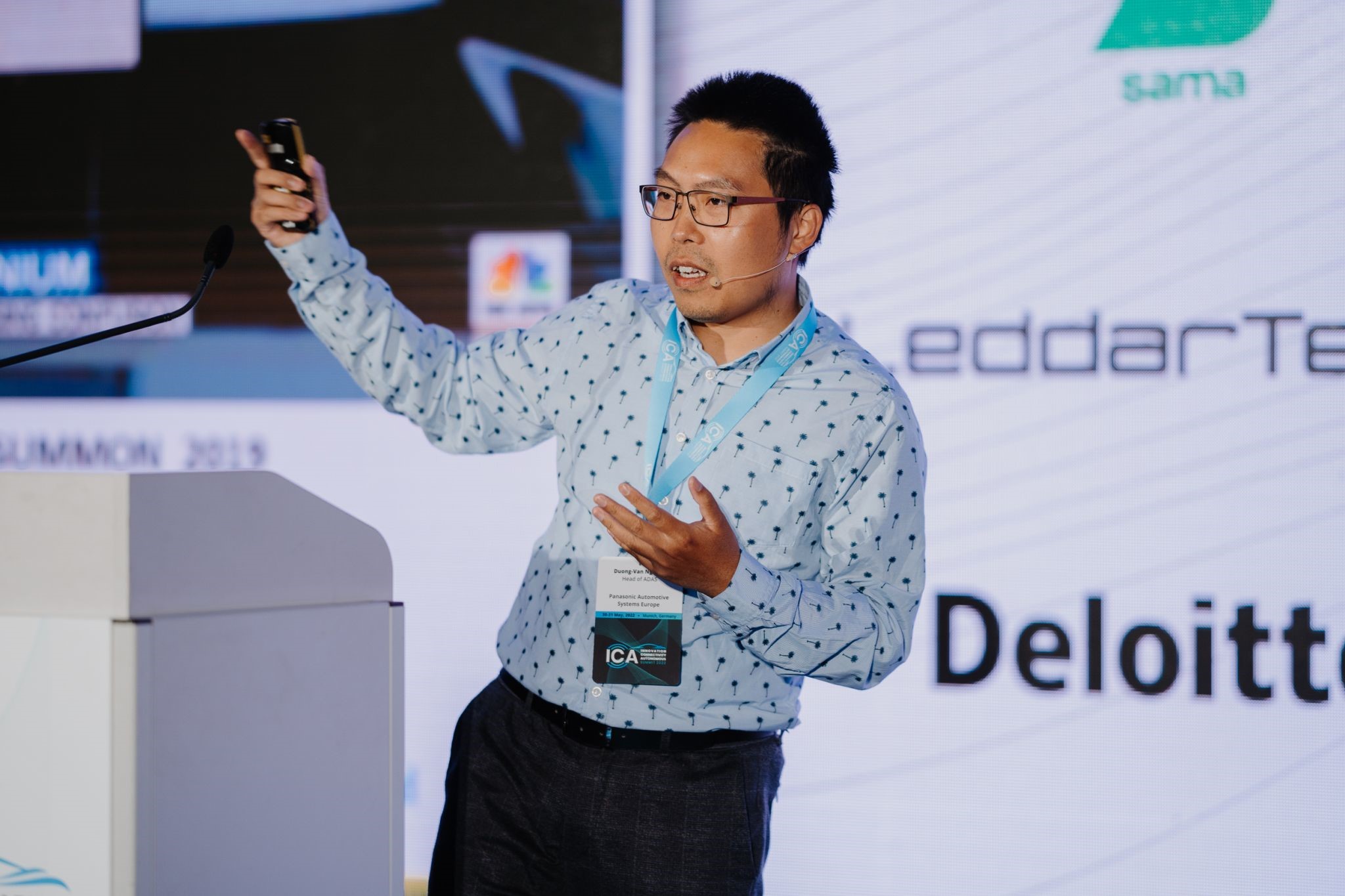 In April 2022, Duong-Van Nguyen was awarded the prestigious title of IEEE Senior by the Institute of Electrical and Electronics Engineers (IEEE) in the U.S.. He is one of the youngest engineers to receive this honor in the history of IEEE.

The IEEE Senior Member status is often awarded to an expert in the industry whose significant achievements have contributed to the world community in their field.

Dr. Duong-Van Nguyen was awarded this honor because he has developed many outstanding solutions for the robotics and automotive industries during his more than 15 years in the sphere.

Despite his many prestigious achievements, Dr. Duong admitted that he felt he has not done anything too extraordinary.

In a recent interview with Tuoi Tre (Youth) newspaper, he shared not only his special ambition for robotics but also what he called his 'secrets of success.'

Dr. Duong was not a diligent student in the traditional sense.

As a child, he did not like going to school and spent more time studying by himself and reading science books after school.

This habit of self-study later proved to be an advantage when he became a college student and then a researcher.

"Actually, most people can do anything if you show them how, as long as they are determined and committed to it," said the Vietnamese expert, who is head of the ADAS department at Panasonic Automotive Systems Europe (PASEU) in Germany.

"If you have to go your own way, it becomes more difficult and requires more commitment.

In Germany, teachers are often too busy to give thorough instructions to their students.

"They usually teach and run a company at the same time, so students like me always have to plan our own projects," Dr. Duong recalled of how he conducted research as a doctoral student more than 10 years ago.

In 2008, the concept of self-driving cars was still fairly new to many in the world, let alone Vietnam.

The innovation of the research topic and his determination convinced the jury to award him the DAAD scholarship, which only 2-3 international students can receive each year.

It was very special for Duong when he received the full scholarship to pursue a doctoral program at the University of Siegen, even though he only had a bachelor's degree at the time.

He is the first and only foreign student who has received such a federal grant in Germany.

Dr. Duong not only has a great ambition for robotics and the automotive industry but also an innovative vision for his fields of interest.

In 2012, when he earned about the Park4you project of the French company Valeo, then based in Ireland, he decided to complete his PhD to apply to the company.

Earning a doctorate after four years, he worked as an engineer at Valeo, being part of the team that developed the first software to help a car stop on its own.

This software is still used today in many products from automakers such as Mercedes-Benz, BMW, Volkswagen, General Motors, and Renault.

As an expert in solving challenges in the automotive industry, especially the application of artificial intelligence to self-driving vehicles, Dr. Duong made an important decision: he left Valeo to work for Panasonic.

In 2016, after one year and seven months at Panasonic, Duong and his team were able to develop software that turns a normal car into an intelligent vehicle able to function like a robot.

He works as the ADAS chief at PASEU and is responsible for most of the company's activities in Europe, particularly the work of the Global Research Hub team.

Global Research Hub specializes in the development of 'brain' software for self-driving vehicles manufactured either by Panasonic or other automotive companies around the world.

"My ambition for robotics is owed to fate and a little luck," said Dr. Duong.

"In those years, my field of research focused mainly on theory, with few opportunities for practical application.

"Vietnam has a car factory, young people can decide for themselves whether they want to pursue this field or not, and they do not have to rely on luck like I did."

The value of faith

One of the most important and valuable lessons Dr. Duong has learned over the past 20 years of working in Europe is faith, especially in scientific fields.

Being the only Vietnamese among foreign students more than a decade ago, he knows how knowledge and faith helped him integrate into the unfamiliar environment.

"There is always some discrimination everywhere, especially against Asians," he said.

"But thanks to my willingness to listen to others and tell them my opinion, everyone believes me.

"They are really good and I am lucky to be able to work with them."

In his opinion, people can only believe those who are honest with them. Duong has an unforgettable memory of that.

In 2017, deep learning -- a branch of artificial intelligence -- became such a hot trend in the world that a lot of money was invested in it.

Level 5 means that a car can drive autonomously without human assistance. In other words, the level of automation can reach 100 percent.

As an authority on deep learning, Dr. Duong knows where and in which areas AI can be applied and where the limits of the algorithm lie. Level 5 of automated driving is one of those limits.

In his opinion, it is impossible to reach the level for a self-driving car because a lot of data has to be used to train the system.

If Dr. Duong accepted the offer, he would have gotten a lot of money because AI and deep learning were very popular at the time.

He rejected it because he knew it would lead to nothing.

When he turned down the offer, many others were eager to take it.

In 2018, the deep learning movement finally came to an end.

That was when a panel of scientists setting standards for safety concluded that a car would have to travel a distance as long as 34 times the distance between the earth and the moon, which is unimaginable, to have enough data to judge its self-driving capacity.

Since then, there has been no talk of a level-5 autonomous car.

"In fact, the level of a self-driving car right can only be level 2 at present," Dr. Duong underlined.

"The customers who gave me quotes in the past now know that I was telling them the truth then.

"The biggest success I can take from this is the trust of these people."

"I am often asked for tips to achieve great success. I just want to share my own experience in the hope that I can help others with it," Dr. Duong said.

"I often look on the bright side, even though in many cases our lives do not turn out the way we want them to.

"Second, I always set a slightly higher goal for myself, which in turn spurs me to try harder.

"Of course, when you set higher goals, you will sometimes fail, but then your cheerful attitude will help you get over the failure.

"Beyond that, I take seriousness and perseverance seriously. It is not enough to be serious and persistent in a week or a month.

"You must also have the willingness to learn.

"You should be able to trust that people will listen to you, understand you, and respect you.

"This is a really profound lesson that I have learned after many years of studying and working with foreigners.

"Finally, there is one more thing you can do right that anyone can do, and that is to manage your day."If you can effectively control your time, believe me, you'll be ready for the next steps on the road to your success."

Dr. Duong-Van Nguyen is PASEU's representative to the EU Commission.

He is a member of the IEEE standard working group P2020.

Dr. Duong is a pioneer and leading scientist in the fields of ADAS and autonomous driving, where he has published one book, one book chapter, one Springer magazine, seven journals, 23 conference papers, and nine patents, according to the Orcid.org website.

He received three research and innovation grants, CARAMEL (2019), CPSoSAware (2020), and TRUSTEE (2022), from the European Research Council.

He previously worked as an R&D manager at Hyundai Mobis in Germany from June to August 2015 and as a research engineer at Valeo in Ireland from 2013 to 2015, after obtaining his PhD in robotics from the University of Siegen in 2009-13.