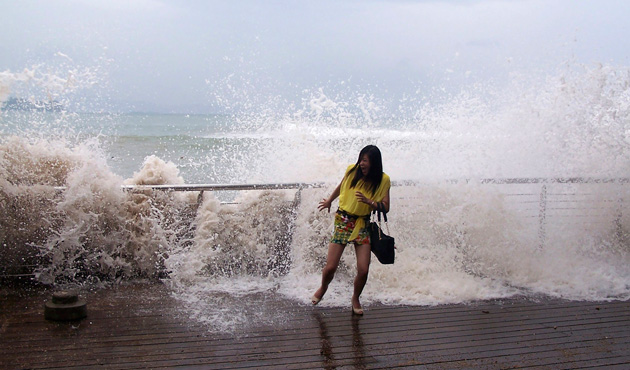 Flight chaos as Hong Kong hunkers down for huge typhoon

Severe Typhoon Usagi barrelled towards Hong Kong on Sunday, shutting down one of the world's busiest sea ports and throwing flight schedules into disarray from Europe to the United States.

Usagi -- which means rabbit in Japanese -- packed winds of 165 kilometres (103 miles) per hour as it closed in on China's densely populated Pearl River Delta, forcing some residents in vulnerable areas to tape up windows and stock up on supplies.

The storm, described by meteorologists as the most powerful anywhere on Earth this year, killed two people in the Philippines and unleashed landslides in Taiwan en route to Hong Kong.

The Hong Kong Observatory, issuing the second of a five-step tropical storm warning, said it was likely to bring "severe" disruption to the city with transport systems affected and expectations of high waves and flooding in low-lying areas.

At the Chek Lap Kok airport, airline counters were besieged by anxious passengers hoping to rebook their flights after the Cathay Pacific group said it was cancelling all its flights from 6:00 pm (1000 GMT) Sunday.

With many other airlines following Cathay's lead, only a handful of flights were still scheduled to land or take off after 6:00 pm. Incoming flights from London, Sydney and Chicago among other cities were cancelled, and thousands of people risked being stranded at their point of origin or in Hong Kong.

Operators at Hong Kong's maritime cargo port, one of the busiest in the world, ceased work late on Saturday, stranding many giant tankers in sea channels not far from shore.

The financial hub is well versed in typhoon preparations and enforces strict building codes, so rarely suffers major loss of life as a result of tropical storms.

But the observatory warned against complacency, saying that Usagi was set to become the strongest storm to hit Hong Kong since 1979 when typhoon Hope killed a dozen people and injured 260.

Usagi was located about 240 kilometres (150 miles) east of Hong Kong as of 4:00 pm (0800 GMT) and was expected to make landfall in the coming hours. The observatory said a "number eight" storm signal was possible, which would shut down most public transport on Sunday evening.

Sunday was a regular day of business in China but in Xiamen city, on the coast of Fujian province, authorities called off school classes and suspended ferries to Taiwan.

On its way to Hong Kong and southern China, Usagi forced the evacuation of some 3,400 people in southern Taiwan, dumped more than 70 centimetres (27 inches) of rain on Hualien city, and forced more than 100 flights to be cancelled to and from the island.

A mudslide hit one hotel in a popular hot-spring resort area of Taiwan's Taitung county late Saturday, shattering windows and damaging some furniture.

"I heard a loud sound and (the mudslide) came through the windows of the restaurant in the back. Our customers were safe but we estimate losses of Tw$1.5 million ($50,000)," a hotel worker told reporters.

"I thought a tsunami was hitting... I've never encountered this before in my life," said a 60-year-old woman who scrambled to safety with her pet dog.

Nine people were injured in Kinmen, a Taiwan-controlled island off China's Fujian province, after they were hit by falling trees, according to the Central Emergency Operation Centre.

But in the Taiwanese port of Kaohsiung, a giant yellow duck designed by Dutch artist Florentijn Hofman -- which has already proved a huge hit in Hong Kong -- was set to be reflated for public viewing as wind speeds ebbed.

Prior to Taiwan, Usagi brushed the far north of the Philippines where a man and a woman drowned when their boat capsized in high seas. Another two people are missing from the mishap.

Authorities in the Batan and Babuyan island groups, which are populated by about 33,000 people, reported toppled power pylons as well as houses, schools and government buildings losing their roofs to Usagi's high winds.

"Some roads are impassable due to debris, landslides and flooding. Local disaster officials told us this was the strongest typhoon they had experienced in years," regional civil defence officer Ronald Villa told AFP.

The region is regularly pummelled by tropical storms. Typhoon Bopha left a trail of destruction in the southern Philippines last year, triggering floods and landslides that left more than 1,800 dead and missing and displaced nearly one million people.