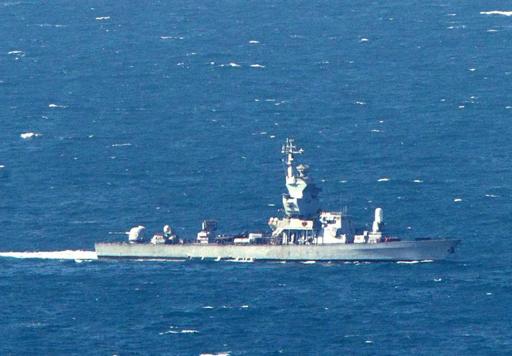 Israel intercepted a ship in the Red Sea carrying Iranian "advanced weaponry" bound for Palestinian militants in Gaza on Wednesday, the military said.

Israel, which has long accused Iran and Syria of providing military aid to Lebanon's Hezbollah and Palestinian militant groups, said the ship was carrying "advanced weaponry," including rockets "capable of striking anywhere in Israel."

The military said the Syrian-made weapons aboard the "Klos-C" were shipped overland to Iran and then onward towards Gaza by sea before being intercepted between Sudan and Eritrea.

"Dozens of surface-to-surface M302 Syrian-manufactured rockets were found (aboard)," Lieutenant Colonel Peter Lerner told reporters, adding that the crew of the ship had "fully cooperated."

"We know for a fact the Iranians are behind this shipment," Lerner said. "We've been following this for several months."

The military said in an earlier statement it had "prevented an attempt to smuggle an Iranian shipment of advanced weaponry intended for terrorist organisations operating in the Gaza Strip."

The military spokesman's office tweeted that the rockets were "capable of striking anywhere in Israel."

Israeli Prime Minister Benjamin Netanyahu said the operation proved that Iran was playing a double-game with the international community, conducting talks on its controversial nuclear programme while supporting "terrorism."

"This clandestine operation was conducted by Iran. While Iran is conducting these talks, smiling to the international community, it continues to arm terrorist groups, continues to perpetrate terrorism around the world," Netanyahu, who is currently in the United States, said in a video statement.

Militants in the Gaza Strip, which is governed by the Palestinian Islamist movement Hamas, have fired dozens of rockets at the Jewish state since the beginning of the year, and Israel has responded with numerous air strikes killing both militants and civilians.

The ship interception came just hours after the Israeli army claimed to have struck two Hezbollah fighters as they tried to plant a bomb near the Israeli-Syrian frontier.

It also came just over a week after the Jewish state reportedly bombarded Hezbollah positions inside Lebanon for the first time since the 2006 war, prompting a threat of retaliation.

Israel is bent on halting any transfer of weapons to arch-enemy Hezbollah, which has sent thousands of fighters across the border to aid Syrian President Bashar al-Assad's regime as it battles Sunni-led rebels.

In May 2013, Israel launched two raids targeting what it said were arms convoys near Damascus destined for Hezbollah.

And in November, there were reports of an Israeli strike against a Syrian air base where missiles to be supplied to Hezbollah were located.

Syria has long provided arms and other aid to Hezbollah, and served as a conduit for Iranian military aid to the movement.

Israel has accused Iran of trying to establish similar supply lines by sea to Gaza.

Israeli commandos in 2011 seized a ship carrying what Israel said were Chinese-made arms from Iran bound for Gaza militants.

In 2002 Israel seized 50 tonnes of weapons from the Karine A on its way to Gaza, which dealt a major blow to relations between the Palestinians and the United States.