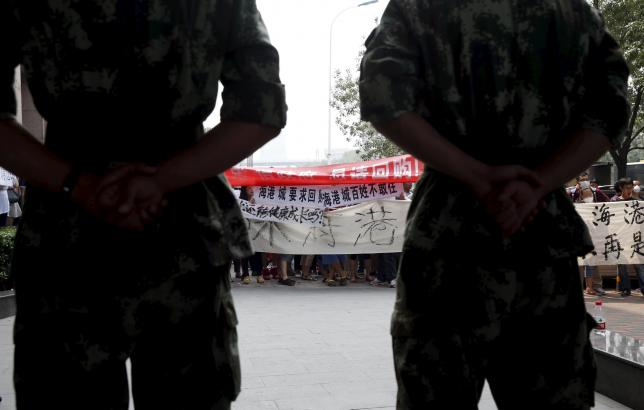 Hundreds of residents displaced by huge explosions last week in the Chinese port of Tianjin demanded compensation on Monday, as authorities worked to complete a sweep of the blast site for dangerous chemicals.

The death toll from the two blasts last on Wednesday rose to 114, officials said. More than 700 people were injured and 70 are missing, most of them fire fighters, the official Xinhua news agency said.

The explosions sent fireballs high into the sky and hurled flaming debris across the world's 10th-largest port, burning out buildings and shattering windows kilometers away.

Xinhua said there had been another small explosion on Monday.

As teams specialized in handling hazardous chemicals scrambled to clean up the site, Tianjin's deputy mayor, He Shushan, confirmed there was about 700 tons of deadly chemical sodium cyanide in the warehouse that blew up.

"Most was concentrated in the core" blast area, he said. Workers would finish a search of a 3-km (2-mile) perimeter to identify and clean up chemicals by the end of the day, he said.

About 200 protesters gathered outside a hotel where officials were briefing journalists.

"This is not a demonstration. This is simply our only channel to attract the government's attention," said Li Jiao, whose home was close to the blast site.

About 6,300 people have been evacuated from around the site in the city of about 15 million and the gateway to China's industrial northeast.

About three dozen police and military personnel blocked the crowd from entering the hotel. Some protesters chanted for the government to "buy back" their homes and others carried signs that read "fix our homes, that's our demand".

There were no clashes.

Another protester surnamed Li said he had taken out an 800,000 yuan ($125,000) loan to buy an apartment that was so badly damaged it was leaning over. He said his family would never live there for fear of health risks

"Most of the people who bought those homes are young, white-collar workers like me. It isn't a small amount of money," he said.

Paramilitary police accompanied residents back to their homes to collect belongings, the People's Liberation Army Daily reported on its microblog.

A man surnamed Zhang, whose apartment was about 600 meters from the warehouse and was destroyed, said government regulators bore responsibility.

"They had one eye open, one closed," he said.

The Ministry of Industry and Information Technology ordered regulators to conduct thorough checks on those who deal with commercial explosives, with a focus on storage, Xinhua reported.

Any company found not to have corrected any irregularities would be shut and the ministry would "in principle" stop issuing new construction permits for industrial explosives factories. Credit Suisse analysts said the explosions could generate insurance losses of between $1 billion and $1.5 billion, citing initial estimates from media.

China's top prosecutor, the Supreme People's Procuratorate, has opened an investigation into the explosions.

Deputy mayor He said officials were confident those responsible would be held to account but he did not discuss compensation.

"We believe that the investigation team can determine the cause of the accident, in short order determine and firmly punish violations of law, and in this way ... give victims and the people a full explanation," He said.

Officials said environmental standards were still "basically guaranteed" and there were plans to prevent rain from creating dangerous gases or spreading contamination.

Global automakers are struggling to assess the damage to their vehicles at China's largest entry point for imported cars. Volkswagen AG <VOWG_P.DE > said about 2,700 of its imported cars were damaged.

Industrial accidents are not uncommon in China after three decades of rapid growth.