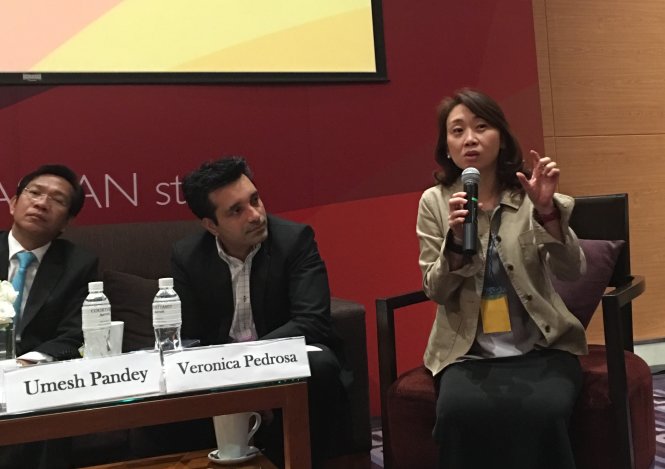 “ASEAN @ 50: Maturity or Mid-Life Crisis” was one of the topics discussed at a media forum in Thailand last week, as regional journalists, experts and scholars gathered to talk about the practicality of the ten-country bloc.

The Reporting ASEAN media forum, running in Bangkok from February 17 to 19, was essentially a crash course in covering and analyzing news related to ASEAN, allowing attendees to gain the skills to report on issues of the grouping, or the Association of Southeast Asian Nations.

Consisting of plenary and parallel sessions, the forum discussed key issues around ASEAN integration, the ASEAN Community and challenges in covering ASEAN as a regional story.

The event was held one year after the establishment of the ASEAN Economic Community (AEC), the ASEAN Political-Security Community (APSC) and the ASEAN Socio-Cultural-Community (ASCC) -- three main pillars of the bloc -- and on the eve of its 50th anniversary.

ASEAN was founded on August 8, 1967 in Bangkok by five founding nations, Indonesia, Malaysia, the Philippines, Singapore and Thailand. Brunei, Cambodia, Laos, Myanmar and Vietnam later joined in to complete the ten-nation coalition.

Tang Siew Mun, head of the ASEAN Studies Center in Singapore, joined the discussion by remarking that the most significant achievement of the bloc has been its ability to maintain regional peace and order.

Tang added that the bloc had also made contributions to keeping security and solving other multilateral issues in the region, even after the coalition became more diversified when the number of members doubled from the first five to the current ten nations.

However, several challenges remain, including stances on the East Vietnam Sea and relations with China, according to the expert.

Addressing the theme “maturity or mid-life crisis,” Dr. AKP Mochtan, ASEAN’s Deputy Secretary-General for Community and Corporate Affairs, said that what matters is identifying what the crisis is.

According to Mochtan, ASEAN has never ceased to exert efforts to maintain the mutual interests of all stakeholders, building trust and solidarity among its members.

However, Mochtan pressed, every ASEAN nation fails to properly inform its own citizens of the regional coalition.

This leads to the paradox of a growing interest in ASEAN amongst the international community and foreign governments, but little being known by its own member countries.

Sharing this view, Dr. Tang from the ASEAN Studies Center, said that this has hindered the bloc’s integration process, adding that ASEAN had failed to receive the attention that lives up to its core values.

Challenges to the press

During discussions held as part of the forum on Saturday, experts shared the view that ASEAN-related news had only been modestly covered in most member nations, with the exception of Thailand, the Philippines and parts of Malaysia.

ASEAN-themed stories would only normally attract readers when the coalition held major meetings, according to the experts.

Kavi Chongkittavorn, a senior fellow at the Institute of Strategic and International Studies of Thailand’s Chulalongkorn University, said readers' attitudes play an important role in the limited amount of ASEAN-related coverage.

Chongkittavorn, who has 25 years of experience in ASEAN studies, said the biggest question for the press when it comes to reporting on the bloc is whether anyone will ever read it.

With most readers less interested in ASEAN issues, the media in Thailand have tried to increase the number of news items with ASEAN themes in order to change readers’ mindset, he added.

Dr. Tang, of the ASEAN Studies Center, pointed the finger at a lack of information sharing mechanism between the media of each of the member nations.

Moreover, the media in each of the member countries have reported only on their own nation’s viewpoints, so the biggest challenge is to switch from a national to regional perspective, Dr. Tang concluded.

In an exchange with Tuoi Tre (Youth) newspaper on the sidelines of the Reporting ASEAN forum, Seree Nonthasoot, Thailand’s  representative to the ASEAN Intergovernmental Commission on Human Rights, said that ASEAN-related news must be more specific to win over more readers.

At a time when traditional journalism is facing tough competition from social media, it is difficult for newspapers in any country to attract readers if they only write general reports of the ASEAN meetings or events, he elaborated.

For instance, he said, many Thai newspapers have run articles on how the AEC will affect the country, garnering interest from local residents and businesspeople.