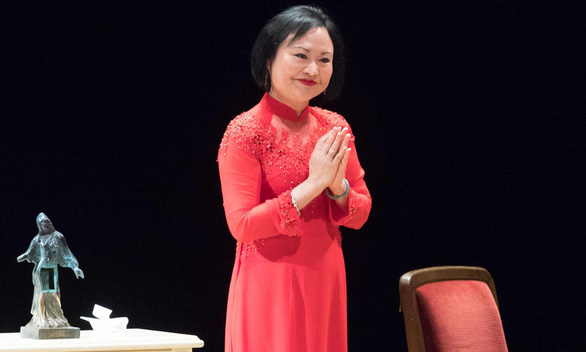 Phan Thi Kim Phuc, known as the ‘Napalm Girl’ in an iconic photo taken during wartime in Vietnam in 1972, has received Germany’s Dresden Peace Prize for her work for peace.

Phuc, 55, was honored on Monday for her support of UNESCO and children wounded in war, and for speaking out publicly against violence and hatred, according to AP News.

The image of her running down the road in tears, naked and severely burned was captured by Vietnamese-American Associated Press photographer Nick Ut, who won a Pulitzer Prize for the photo one year later.

Ut, then 21, drove Phuc to hospital where he demanded doctors treat her.

“I cried when I saw her running,” The Guardian quoted Ut as saying in 2012.

“If I don’t help her and if something happened and she died I think I’d kill myself after that.”

Phuc sustained third-degree burns on 30 percent of her body, and did not begin scar treatment until 2015, when she sought help from dermatologists in the U.S.

She is now living in Canada with her husband and two sons.

Hoping to join efforts in building a better world, Phuc set up a fund in 2002, which has made significant contributions to the construction of schools, orphanages, and healthcare facilities worldwide, according to the Vietnam News Agency.

Phuc’s latest project is building libraries for children in her hometown of Trang Bang.

The Dresden Peace Prize has been awarded annually since 2010 to honor “the brave, the tolerant, the humane from all over the world," according to organizers of the prize.