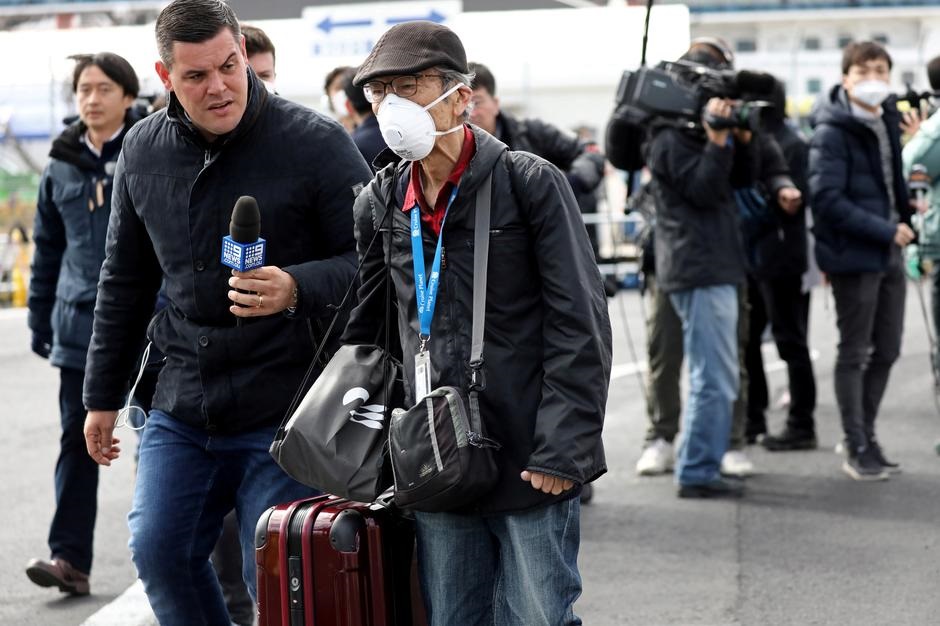 TOKYO/BEIJING -- China reported a dramatic drop in new cases in the province at the heart of the coronavirus outbreak, while scientists reported the new virus may spread even more easily than previously believed.

The new figures include subtracting 279 cases in the province that were not confirmed, a larger-than-usual number. No explanation was given. Excluding the deductions, the number of new cases on Wednesday stood at 628, still a large drop.

China is struggling to get its economy back on track after imposing severe travel restrictions to contain a virus that emerged in the central province of Hubei late last year.

Beyond mainland China, six people have died from the disease, and governments around the world are trying to prevent it from spreading into a global pandemic.

Australia’s Qantas Airways Ltd said on Thursday it will ground the equivalent of 18 planes, freeze recruitment and ask its 30,000 staff to use up annual leave as it grapples with falling demand from Asia due to the coronavirus epidemic.

Scientists published on Wednesday preliminary findings in the New England Journal of Medicine that suggested the virus spreads easily, including through patients who have no symptoms.

“If confirmed, this is very important,” said Dr. Greg Poland, a virologist and vaccine researcher with the Mayo Clinic in Rochester, Minnesota, who was not involved with the study.

Hundreds of passengers trundled off a cruise ship in Japan on Wednesday after being held on board in quarantine for more than two weeks, as criticism mounted of Japan’s handling of the coronavirus outbreak.

Even as passengers rolled their luggage off the Diamond Princess cruise liner, Japanese authorities announced 79 new cases had been discovered on board, bringing the total to at least 620, well over half of the known cases outside mainland China.

The Diamond Princess has been quarantined near Tokyo since Feb. 3, initially with about 3,700 people aboard. The rapid spread of the disease on board led to criticism of the Japanese authorities just months before Japan is due to host the Olympics.

From Wednesday, passengers who tested negative and showed no symptoms were free to leave. Around 500 were expected to disembark on Wednesday, with the rest of those eligible leaving over the next two days. Confirmed cases were to be sent to hospital, while those who shared cabins with infected passengers may still be kept on board.

Around half of the passengers and crew are Japanese, and are free to go home once cleared to leave. Other countries, including Canada, have said they will fly passengers home and quarantine them on arrival. The United States flew more than 300 passengers to air bases in California and Texas this week.

“I am very keen to get off this ship,” Australian passenger Vicki Presland told Reuters over a social-media link. She was among a group of Australians catching an evacuation flight back to 14 days of quarantine in the city of Darwin.

Infectious disease specialist Kentaro Iwata of Japan’s Kobe University Hospital, who volunteered to help aboard the ship, described the infection control effort as “completely inadequate” and said basic protocols had not been followed.

“Unfortunately, cases of infection have emerged, but we have to the extent possible taken appropriate steps to prevent serious cases,” Kato said in a report by state broadcaster NHK.

The U.S. Centers for Disease Control and Prevention (CDC) said Japan’s efforts “may not have been sufficient to prevent transmission among individuals on the ship.”

Clyde and Renee Smith, 80-year-old American cruise passengers hospitalized in Japan since testing positive for the virus on Feb. 3, learned on Wednesday they were still positive.

“We are very happy here,” Clyde said from the couple’s hospital room in western Tokyo. “They’re taking excellent care of us. This is the newest, fanciest hospital I’ve ever seen.”

From the start, experts raised questions about quarantine on the ship. Passengers were not confined to rooms until Feb. 5. The day before, as passengers were being screened, events continued, including dances, quiz games and an exercise class.