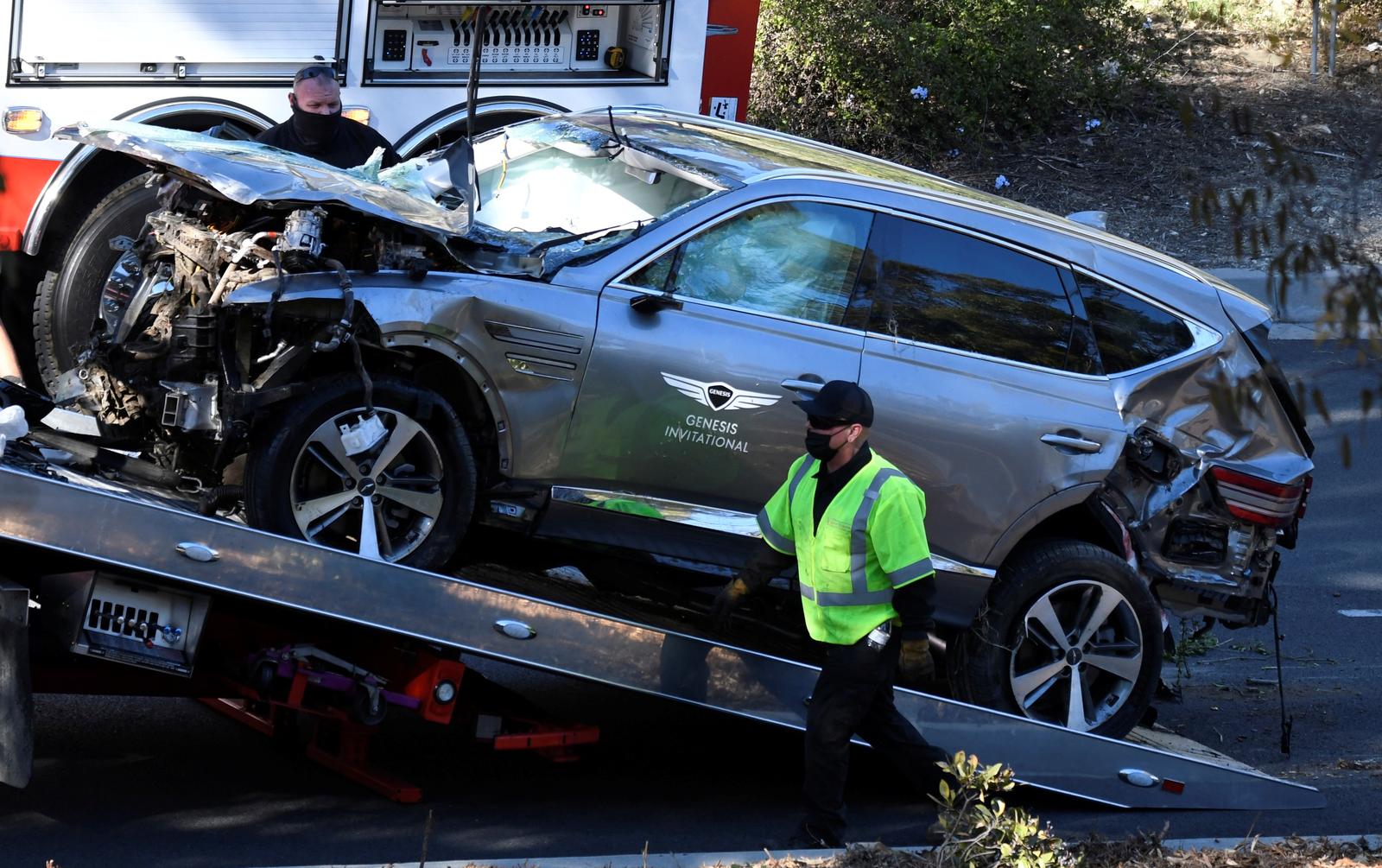 LOS ANGELES -- Golfing champion Tiger Woods was hospitalized in Los Angeles on Tuesday with severe leg injuries suffered when his car swerved off a road and rolled down a steep hillside, requiring rescue crews to pry him from the wreckage, authorities said.

The injuries were not believed to be life-threatening, Los Angeles County Sheriff Alex Villanueva told a news conference hours later, adding that Woods was conscious and “able to communicate” when rescue personnel arrived.

The sheriff said there was no evidence of impairment when Woods was assessed by emergency workers at the scene, and that no blood samples were drawn by investigators after he was rushed by ambulance to the Harbor-UCLA Medical Center.

Sheriff’s deputy Carlos Gonzales, who was the first to reach the wreck, described Woods, who was wearing his seatbelt, as “calm and lucid,” and said he recognized the golfing great after Woods told the officer his name was “Tiger.”

The full nature and extent of Woods’ injuries remained unknown, and it was not immediately clear what effect the accident might have on the future of his career.

Woods, 45, who has endured a series of back and knee injuries in recent years, is considered the greatest golfer of his generation. He is the only modern pro to win all four major golf titles in succession, taking the U.S. Open, British Open and PGA Championship in 2000 and the Masters title in 2001, a feat that became known a the Tiger Slam.

In a statement given earlier to Golf Digest magazine, Woods’ agent, Mark Steinberg, said the winner of 15 major championships, was undergoing surgery for “multiple leg injuries.”

The cause of the accident was under investigation, but the sheriff said there was no indication that the driver was under the influence of any substances or that weather was a factor.

Video footage from the scene showed Woods’ dark gray 2021 Genesis sport utility vehicle badly crumpled and lying on its side near the bottom of the hillside, its windows smashed.

Woods, one of the world’s most celebrated sports figures, was the sole occupant of the car when it crashed about 7:12 a.m. near the suburban communities of Rolling Hills Estates and Rancho Palos Verdes, the sheriff’s department said.

Woods’ vehicle swerved into the roadside curb, struck a tree, and “there were several rollovers” before the SUV came to rest, Villanueva said. The sheriff said the stretch of roadway, known for its sloping terrain and curves, “has a high frequency of accidents.”

The sheriff also said the distance the vehicle traveled before leaving the roadway, leaving no visible skid marks, pointed to the car “going at a relatively greater speed than normal.”

The sheriff’s department initially said a hydraulic tool known as “the jaws of life” was used to pry Woods from the wreckage. Fire department officials said later that emergency personnel pulled Woods from the vehicle through the front windshield after the glass and surrounding frame were removed.

Woods’ success on the greens elevated him to worldwide superstardom, ushering in an era of multimillion-dollar endorsements and lucrative appearances. As the first African American to achieve major golf stardom, Woods’ success also helped transform the sport itself, broadening its appeal far beyond golf’s traditional domain of white, male and middle-class enthusiasts.

He was also a major influence on a modern generation of golfers that included such pros as Australian former world No. 1 Jason Day, who has said he read a book about Woods and decided to copy the American’s rigorous work ethic.

Woods, whose career has been hampered in recent years by back injuries and who had his fifth back surgery in December, hosted the PGA tour’s annual Genesis Invitational at the Riviera Country Club over the weekend but did not compete.

“Praying for my brother @TigerWoods as we all anxiously await more news,” retired baseball star Alex Rodriguez said on Twitter. “Thinking of him and his entire family.”

“I am sick to my stomach,” fellow PGA Tour golfer Justin Thomas said during a news conference in which he called Woods one of his closest friends. “I just hope he’s alright.”

The PGA Tour issued a statement from Commissioner Jay Monahan. “We are awaiting further information when he comes out of surgery. On behalf of the PGA TOUR and our players, Tiger is in our prayers and will have our full support as he recovers.”

Former U.S. President Donald Trump, who has played golf with Woods on several occasions and awarded him with the Presidential Medal of Freedom in 2019, issued a statement urging Woods to get well soon, adding: “You are a true champion!”

California-born Eldrick “Tiger” Woods turned professional in 1996 and won his first U.S. Tour title in only his fifth start. Since then, he has virtually redefined the game.

Woods held the top spot in professional golf’s world rankings for a record total of 683 weeks, winning 14 major championship titles from 1997 to 2008.

After a series of injuries and personal issues derailed his career at times, Woods claimed his 15th major title at the Masters in 2019, his fifth time earning the coveted green jacket given to Masters champions.

His 15 major titles stand second only to the record 18 won by Jack Nicklaus.