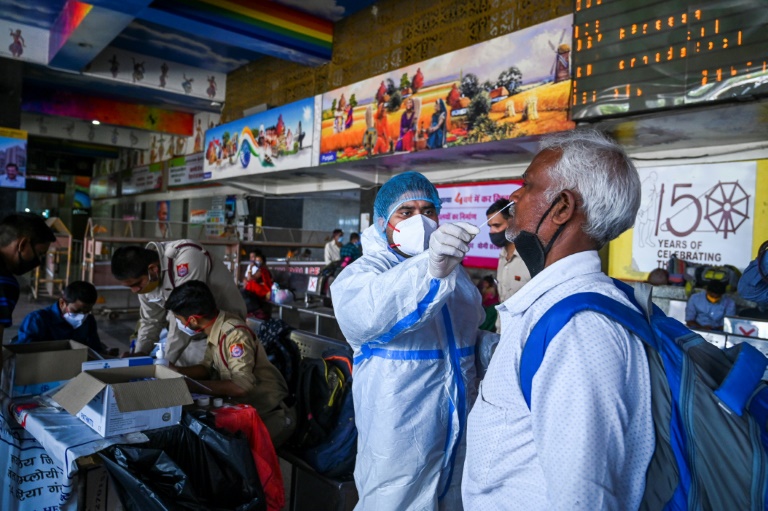 A co-founder of the global scheme to provide vaccines for poor people said Thursday India was delaying exports of much-needed jabs, as EU leaders met for crisis talks in Brussels to try to solve supply issues on the badly-hit continent.

The fracas around vaccines threatens to slow a global immunisation drive that is seen as the way out of the pandemic, as third waves sweep several countries and force governments to reimpose tough anti-virus restrictions.

At the centre of much of the vaccine controversy is AstraZeneca, which on Thursday said its jab was 76 percent effective instead of 79 percent after being called out for publishing outdated data.

AstraZeneca is also one of the main vaccines used in the Covax project, which supplies poorer countries with jabs, and is facing export delays in India where it is produced by the Serum Institute.

On Thursday, the Gavi alliance, a Covax co-founder, said deliveries of vaccines to lower-income economies will face delays because of a "setback" in obtaining export licences from the Indian government.

A Gavi spokesman said the licence delays "are due to the increased demand of Covid-19 vaccines in India".

The vast country recorded more than 50,000 new coronavirus cases on Thursday for the first time since November and is struggling to keep up with its own faltering vaccine drive at home.

"Covax is in talks with the government of India with a view to ensuring deliveries as quickly as possible," the Gavi spokesman said, without giving further details.

The AstraZeneca shot was hailed as a breakthrough because it is cheaper and easier to store and transport compared with other vaccines.

It is at the centre of the EU's vaccine woes, with an infuriated Brussels tightening export controls after the British-Swedish company failed to deliver the doses it had promised to the bloc.

EU leaders were meeting via videoconference on Thursday to discuss AstraZeneca supplies, as well as new vaccine export rules that will weigh how needy countries are in terms of infection rates, how many jabs they have, and how readily they export doses to the bloc.

Draft conclusions of the meeting, seen by AFP, show support for export controls and warn that Europe must step up its own game when it comes to vaccine production.

"Accelerating the production, delivery and deployment of vaccines remains essential and urgent to overcome the crisis. Efforts to this end must be further intensified," the draft said.

The talks come as Germany, France, Belgium, Austria and the Netherlands tighten restrictions to control surges in cases.

And Ukraine on Thursday registered a record number of coronavirus deaths for the third straight day, as new infections also reached a record high.

Mass vaccination programmes are considered vital to ending the pandemic, which has claimed more than 2.7 million lives around the world, hammered the global economy and left much of humanity under punishing restrictions.

"We were just waiting to be all together again because we were really sad to be divided like that, floor by floor," said Lydie, a 91-year-old resident of a retirement home in France's Val-de-Marne, where vaccinations have allowed an easing of curbs.

Governments are trying to ramp up vaccinations, racing against the virus which is surging once again in many parts of the world.

Brazil's Covid-19 death toll passed 300,000 on Wednesday, the second-highest number of fatalities in the world, with its hospitals pushed to the brink.

At a demonstration in Rio de Janeiro marking the virus deaths in Brazil, protesters held signs that read "Shame" and laid 30 roses on symbolic patient beds in front of a hospital.

'Bump in the road'

Beyond production and supply issues, AstraZeneca has faced other challenges that have dented confidence.

The pharma giant was forced to review its US trials and then slightly revise down the jab's efficacy from 79 percent to 76 percent, after an American agency raised concerns about outdated information.

Top US infectious disease expert Anthony Fauci had said the discrepancy was a "bump in the road" and that data would show it is "a good vaccine".

Where the EU vaccine rollout has stuttered, there has been huge progress elsewhere.

Israel said Thursday more than half of its 9.2 million people have received both doses of the Pfizer/BioNTech shot after it sped ahead with its vaccine drive.

And in the United States -- the world's worst-hit nation -- around 70 percent of Americans aged 65 or over have received at least one dose.

But the pandemic threat is far from over, illustrated by the recent decision to bar overseas fans from the already delayed Tokyo Olympics.

The torch relay for the Games got off to a low-key start Thursday and organisers hope it will build excitement.

"There would have been more excitement if there wasn't coronavirus."