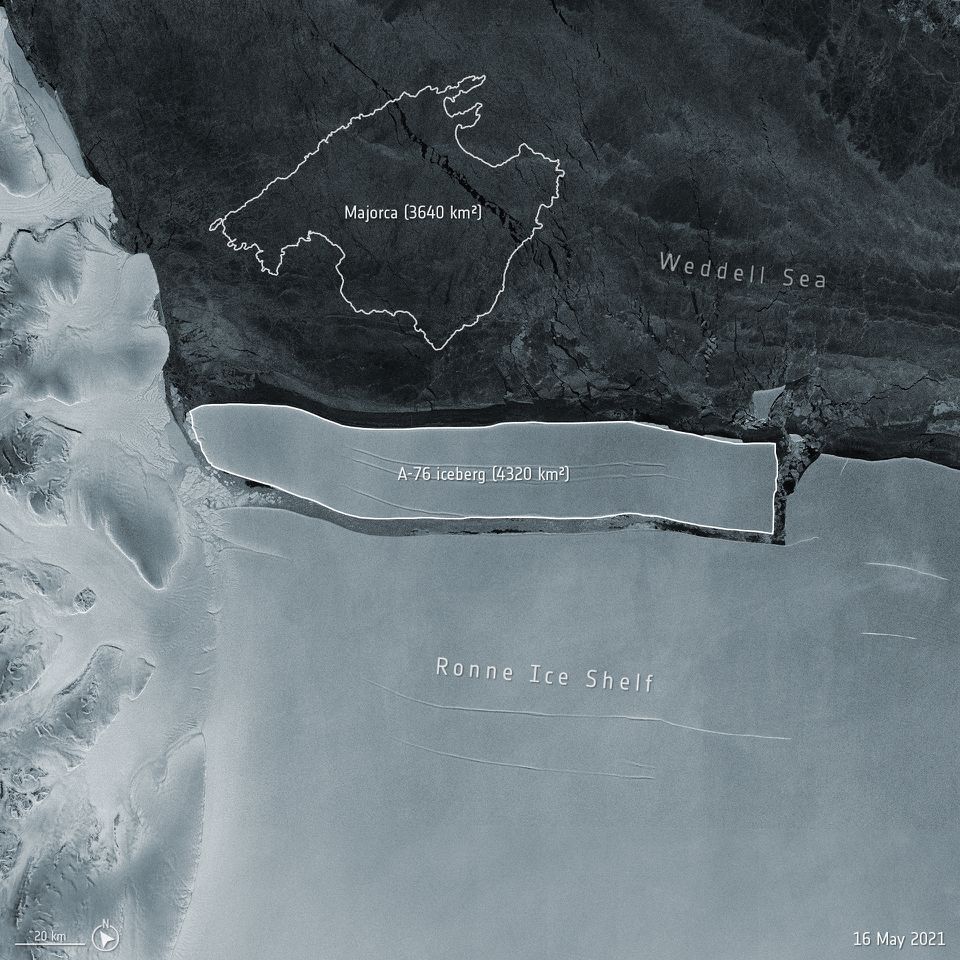 A giant slab of ice bigger than the Spanish island of Majorca has sheared off from the frozen edge of Antarctica into the Weddell Sea, becoming the largest iceberg afloat in the world, the European Space Agency said on Wednesday.

The newly calved berg, designated A-76 by scientists, was spotted in recent satellite images captured by the Copernicus Sentinel-1 mission, the space agency said in a statement posted on its website with a photo of the enormous, oblong ice sheet.

The enormity of A-76, which broke away from Antarctica's Ronne Ice Shelf, ranks as the largest existing iceberg on the planet, surpassing the now second-place A-23A, about 3,380 square km (1,305 square miles) in size and also floating in the Weddell Sea.

Another massive Antarctic iceberg that had threatened a penguin-populated island off the southern tip of South America has since lost much of its mass and broken into pieces, scientists said earlier this year.

A-76 was first detected by the British Antarctic Survey and confirmed by the Maryland-based U.S. National Ice Center using imagery from Copernicus Sentinel-1, consisting of two polar-orbiting satellites.

The Ronne Ice Shelf near the base of the Antarctic Peninsula is one of the largest of several enormous floating sheets of ice that connect to the continent's landmass and extend out into surrounding seas.

Periodic calving of large chunks of those shelves is part of a natural cycle, and the breaking off of A-76, which is likely to split into two or three pieces soon, is not linked to climate change, said Ted Scambos, a research glaciologist at the University of Colorado at Boulder.

Scambos said the Ronne and another vast ice shelf, the Ross, have "behaved in a stable, quasi-periodic fashion" over the past century or more. Because the ice was already floating in the sea before dislodging from the coast, its break-away does not raise ocean levels, he told Reuters by email.

Some ice shelves along the Antarctic peninsula, farther from the South Pole, have undergone rapid disintegration in recent years, a phenomenon scientists believe may be related to global warming, according to the U.S. National Snow & Ice Data Center.