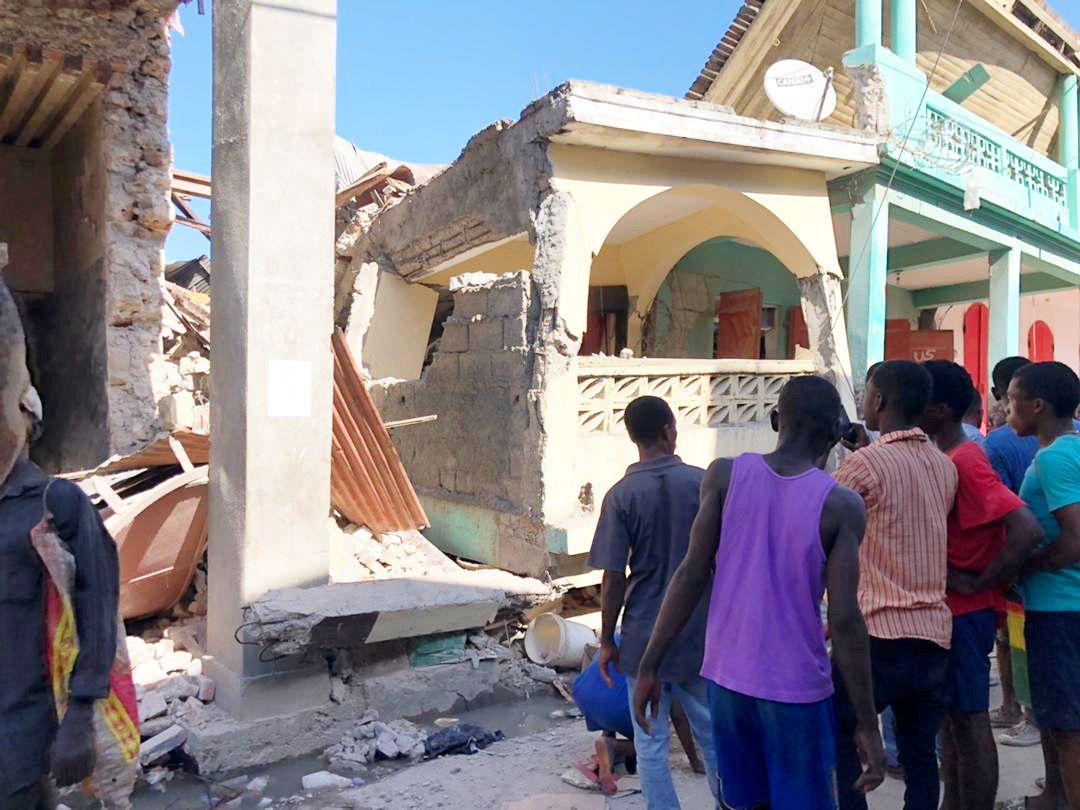 At least 304 people died and hundreds were injured after a major earthquake struck southwestern Haiti on Saturday, authorities said, reducing churches, hotels, schools and homes to rubble in the latest tragedy to hit the impoverished Caribbean nation.

The 7.2-magnitude quake, which was followed by a series of aftershocks, struck 8 km (5 miles) from the town of Petit Trou de Nippes, about 150 km west of the capital Port-au-Prince, at a depth of 10 km, the United States Geological Survey said.

That made the temblor which was felt as far away as Cuba and Jamaica potentially bigger and shallower than the magnitude 7 earthquake 11 years ago that killed tens of thousands on the island.

This one - which occurred around 8:30 a.m. local time - hit farther away from the capital, however. In Port-au-Prince, it was strongly felt but did not appear to have caused major damage, according to Reuters witnesses.

Still, Haiti's Civil Protection service said the preliminary death toll stood at 304, with at least 1,800 injured and more people unaccounted for. Preliminary rescue operations by emergency teams and ordinary citizens had enabled many people to already be recovered from the debris.

At least 949 homes, seven churches, two hotels and three schools had been destroyed, it said. A further 723 homes, one prison, three health centres and seven schools had been damaged although there was no major damage to port, airport or telecoms infrastructure.

Prime Minister Ariel Henry, who flew over the region to survey the damage, declared a month-long state of emergency.

The nearest big town was Les Cayes, where many buildings collapsed or suffered major damage, according to authorities.

"I saw bodies being pulled out of the rubble, injured and perhaps dead people," said Les Cayes resident Jean Marie Simon, 38, who was at the market when the earthquake struck and ran home to see if his family was safe. "I heard cries of pain everywhere I passed through."

His wife and 2-year-old child had been bathing and rushed out to the street, naked, just before the front of the house crumbled. Simon gave his wife his shirt and they took refuge in the courtyard of a church with other locals. His mother's house had also collapsed.

"There are a lot of aftershocks and every time there's one, people run and shout," he said. "My legs are still trembling."

Videos posted to social media showed citizens pulling others from debris and crowds of people waiting for medical attention at overwhelmed hospitals.

USGS said a significant amount of the population was at risk of landslides, with road obstructions likely. Haiti's Civil Protection service said a landslide had blocked the highway between Les Cayes and the town of Jeremie.

Likely to complicate relief efforts is the fact Haiti is now in the probable track of Tropical Storm Grace, which could bring heavy rains and winds early next week.

Also, access by road to the southern region, where the quake struck, has been restricted by gang control of key areas although Henry said police would accompany any convoys going to the south.

The earthquake comes just over a month after the assassination of President Jovenel Moise, who had been ruling by decree, which deepened the country's political turmoil.

Meanwhile, swaths of Haiti are facing growing hunger and healthcare services are already overwhelmed by COVID-19.

That region had only recently recovered from Hurricane Matthew, which struck in 2016, killing hundreds and causing widespread devastation.

"This country just never finds a break! Each year of mismanagement did not hurt but the cumulative effects made us vulnerable to everything," said Haitian entrepreneur Marc Alain Boucicault on Twitter.

"It's going to take years to fix things and we have not even started!"

In Port-au-Prince, residents traumatized by the 2010 quake rushed, screaming, into the streets and stayed there as the aftershocks rumbled on.

"In my neighborhood, I heard people screaming. They were flying outside," said resident Sephora Pierre Louis. "At least they know to go outside. In 2010, they didn’t know what to do. People are still outside in the street."

The quake sent shock waves as far as Cuba and Jamaica although there were no reports of material damage, deaths or injuries there.

"Everyone is really afraid. It's been years since such a big earthquake," said Daniel Ross, a resident in the eastern Cuban city of Guantanamo.

He said his home stood firm but the furniture shook.

U.S. President Joe Biden said he had authorized an immediate U.S. response and named Samantha Power, administrator of the U.S. Agency for International Development, coordinator of the effort.