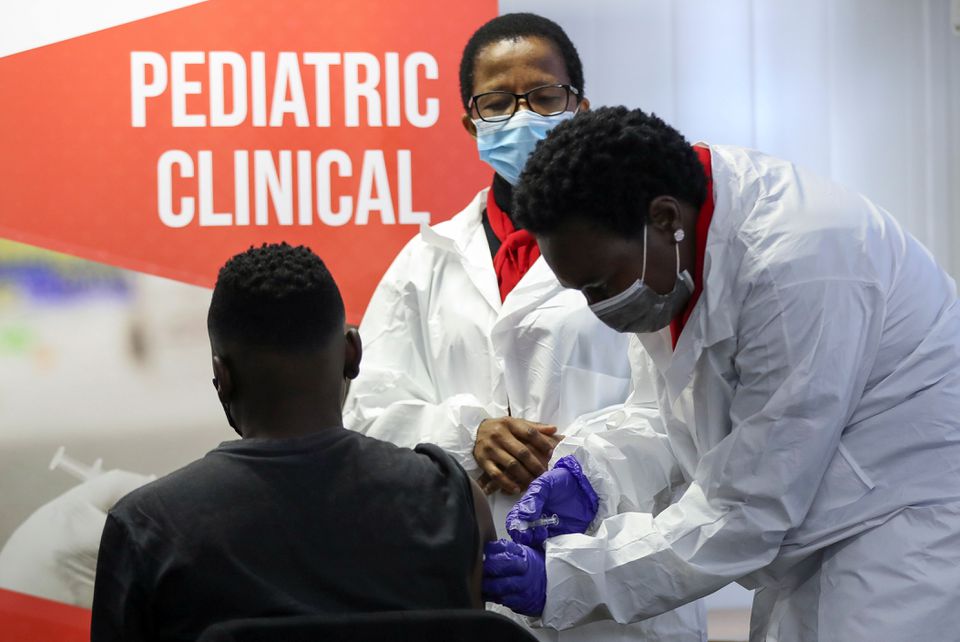 Higher hospital admissions among children during a fourth wave of COVID-19 infections in South Africa that has been driven by the Omicron coronavirus variant should not prompt panic as infections have been mild, a health official said on Saturday.

A large number of infants admitted with COVID-19 last month in Tshwane, the metropolitan area that includes the capital Pretoria, raised concerns that the newly identified Omicron could pose greater risks for young children than other variants.

Scientists have yet to confirm any link and have cautioned that other factors could be at play.

Ntsakisi Maluleke, a public health specialist in the Gauteng province that includes Tshwane and the biggest city Johannesburg, told Reuters that out of the 1,511 COVID-positive patients in hospitals in the province 113 were under 9 years old, a greater proportion than during previous waves of infection.

"We are comforted by clinicians' reports that the children have mild disease," she said in an interview, adding health officials and scientists were investigating what was driving increased admissions in younger ages and were hoping to provide more clarity within two weeks.

Since only a small percentage of South Africa's positive COVID-19 tests are sent for genomic sequencing, officials do not yet know which variants the children admitted to hospital have been infected with.

Maluleke said healthcare workers could be acting out of an abundance of caution. "They would rather have a child under care for a day or two than having a child at home and complicating, ... but we really need to wait for the evidence," she said.

She said many COVID-19 patients in Gauteng were reporting "non-specific" flu-like symptoms like a scratchy throat. But she urged parents and pregnant women, another cohort that has seen more hospital admissions recently, not to take flu-like symptoms lightly and to get tested in case intervention is needed further down the line.

"The public needs to be less fearful but vigilant," she said. Despite a recent influx of admissions, Gauteng's dedicated COVID-19 bed occupancy was still only around 13%, Maluleke said.

Scientists are yet to determine what severity of illness is caused by the Omicron variant, first detected in southern Africa last month and since seen in more than 30 countries, and whether it may be more resistant to existing vaccines.

But an article by the South African Medical Research Council based on early observations at the Steve Biko/Tshwane District Hospital Complex in Pretoria over the last two weeks contained reassuring signs.

The majority of patients in the COVID wards at the hospital complex were not oxygen-dependent and were "incidental COVID admissions," having another reason for admission, the article said.

"This is a picture that has not been seen in previous waves. In the beginning of all three previous waves and throughout the course of these waves, there has always only been a sprinkling of patients on room air in the COVID ward," it said.

There had been no COVID-related deaths among 34 admissions in the paediatric COVID wards over the last two weeks. But the article added that trends would become clearer and further analysis was still being conducted.