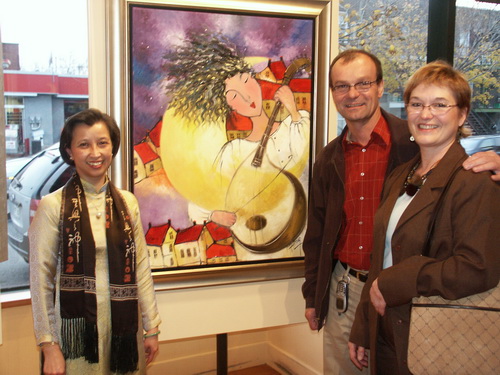 The joys of life

Patricia Minh Huong has been a household name to gallery owners and arts enthusiasts in Canada. Her works, which sell well, are likened by herself to a journey which she explores with innocent eyes.

Some years ago, when the global economy wasn’t in crisis yet, up to 90 of her oil and acrylic paintings were sold on average each year. Once, following her exhibition at Klimantiris Gallery, all her 60 works on display were sold out within that year.

Though she has gone this far and achieved remarkable success in the field, Huong always considers painting her pastime only.

Huong fell in love with painting since a child, but her father discouraged her from adopting it professionally due to the social stigma attached to it back then.

After graduating from high school, on her father’s advice, Huong majored in French literature and philosophy at the University of Letters in central Hue, but also unofficially attended classes at the Hue National Fine Arts School behind his back.

She left Vietnam with her husband and their two sons in 1978 and settled in Montreal’s Valleyfield town.

Initially she stayed home to take care of her kids and only painted in her spare time before being encouraged by her family and friends to adopt painting as her secondary profession.

Huong has made considerable strides since her first display in Vietnam in early 1975 and her two first key exhibitions held at Business Centre St-Hubert Montreal in 1997 and Art Gallery Mullhouse in France two years later.

Huong’s artworks have made their solid way to quite many exhibitions and arts galleries all over Canada, France and the US.

Following the Artexpo exhibition in New York, Huong was named ‘Artist of the month’ by the Décor Magazine NY in Mar 2001.

Though her most recent exhibition was in 2010, her name has been included over and over in the Guide Biennal des Artistes Canadiens en Galeries (Biennial Guide of Canadian Artists in Galleries) since 2000.

After 35 years away from her homeland, Huong’s day job remains working as the assistant to a law office.

However, the allure of her paintings seems almost irresistible for a large number of art buffs.

“I’m not sure if luck has always smiled on me because I consider painting my part-time job only,” Huong confided.

“Or maybe they love my paintings because of my carefree, cheery style or just because I’m an Oriental artist?,” Huong surmised.

Her paintings are rich in images closely linked to her homeland, including slanting houses, cottages, and dried twigs, giving her an original identity compared to North American or even other Asian artists.

With oil and acrylic paintings, Huong doesn’t belong to any particular school, though famed Italian artist Modigliani is among her favorites.

“I paint just to share my feelings with impassioned fans or merely average visitors. Relishing an art work means touching its ‘soul’ though momentarily,” the artist shared.

Huong’s fans said they love her ingenious use of colors which make them feel happy and lighthearted, and also the cosiness with the random strokes in depicting Oriental girls’ eyes.

“I love music and daughters but don’t have any, so I really enjoy depicting girls with musical instruments, which have made my name,” Huong shared.

The other priority in her items is flamboyant flowers, and non la (Vietnamese conical hat), which help relieve her reminiscence of her homeland.

“Huong explores the world with an alluring fuse of colors and emotions. Her creative essence is called the joys of life,” the Canadian Rimawi Art Gallery said about her.

Though Huong has yet to return to Vietnam, she really hopes to launch exhibitions with overseas Vietnamese communities and get back to Vietnam someday.

Every year Huong donates her works to kids’ hospitals, orphanages and nursing homes for the elderly which put them on auction to raise funds.