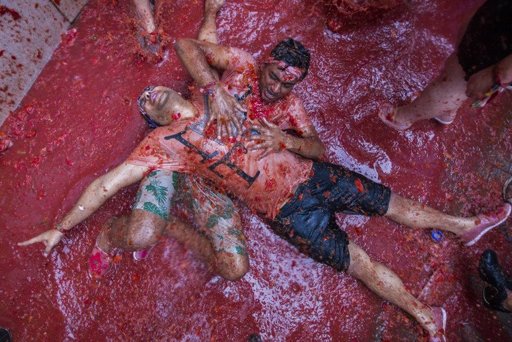 Some 20,000 revellers pelted each other with 130 tonnes (286 pounds) of squashed tomatoes Wednesday in a rain-drenched annual Spanish food fight known as the Tomatina, but this year they had to pay to join the fun.

Defying sheets of rain and stormy skies, masses of tomato-stained people from around the world -- led by Australians, Japanese and Britons -- engaged in battle in the Plaza Mayor square of Bunol, eastern Spain.

Many wore shower caps under the rain and goggles to protect their eyes from the acidic juice of the tomatoes, which must be squashed before they are hurled at fellow participants. Some people dressed as tomatoes.

In driving rain, some people who had partied through the night were singing, clapping and still taking swigs of wine and sangria directly from the bottle.

"It is one of the most famous festivals in western Europe and it is safer than running with a bull," said 22-year-old Brad Fisher from Sydney, who came with a tour group of 700 people wearing a mustard-coloured shirt with a ketchup logo.

The Tomatina has significant advantages over Spain's Pamplona bull-running festival, he explained. "One hundred and thirty tonnes of tomatoes is a lot but it's still better than a 500-kilo bull."

This year, for the first time, participants are paying a minimum of 10 euros ($13). Prices go up to 750 euros to get up on one of the six trucks bringing in the tomatoes. Some 5,000 free tickets have been set aside for Bunol residents.

Bunol Mayor Joaquin Masmano Palmer says the new fee helped organisers to control crowd numbers but he has also admitted that the food fight, which has cost 140,000 euros to stage this year, represents a heavy burden for a town with a debt of 4.1 million euros.

For the first time, a private company, SpainTastic, has been charged with selling entry tickets to the Tomatina, sparking concern that recession-hit Spain's town festivals may be on the path to privatisation.

Among the top ticket buyers were Australians with 19.2 percent of the total, Japanese with 17.9 percent, Britons with 11.2 percent, Spaniards with 7.8 percent and Americans with 7.5 percent. About 60 percent of the tickets went to people aged 18 to 35. The oldest was 82.

Tomatina T-shirts, caps and coffee mugs are on sale, too.

Japanese tourist Keiko Jinhouchi, 28, said she was spending a week in Barcelona with two friends from Tokyo and they decided to enter the fray.

"It's my first time in Spain, we're here for the day. Because it's fun," she said.

Fellow Japanese Kohei Onizaki, equipped with swimming goggles, had a tomato painted on one cheek and a Japanese flag on the other.

Though the origins of the event are unclear, it is thought to have its roots in a food fight between children during a parade in the mid-1940s.

It has grown in size as international press coverage has brought more and more people to the festival.

After the fight, many of the revellers traditionally head to the local river to wash off the pulp. In this year's rain, that may not be necessary.