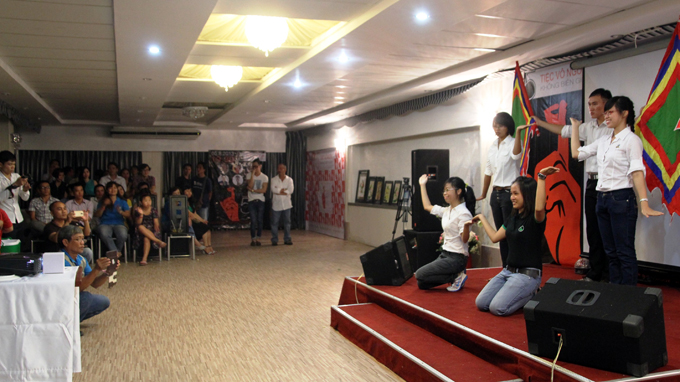 The sound of silence

The fifth “Silent party” was recently held in Ho Chi Minh City as another attempt to give hearing-impaired youths chances to mingle with one another and bring out the best of themselves through their own language.

At this party, besides local hearing impaired youths,  Peter Yang, a deaf person of Vietnamese origin who is residing in Canada, or people with other disabilities such as Le Tuong Vy, 27, an office worker who has been paralyzed since her childhood years, were also present.

Nguyen Thi Hoai Trang, 22, who is deaf from meningitis as a child and has overcome countless difficulties in her studies, did not hesitate to cross out the word “hearing-impaired”, saying “No problem. Just call me a deaf. I know that normal people are trying to integrate with us. A larger community is trying to mix into a smaller one, I'm happy about that”.

Several able-bodied youths also made it to the party.

“When I turned to the girl sitting next to me and said to her that it was a good pantomime, she raised two fingers as a sign of agreement. When the play ended, I turned to talk to her, then I realized she can’t hear”, said Nguyen Minh Thien, 21, from the University of Social Sciences and Humanities in Ho Chi Minh City.

The most interesting part was the exchanges. All eyes were fixed on the hearing-impaired youths, who began to speak in their own language.

Peter Yang, Trang and other deaf members of the Deaf Club in HCMC and Dong Nai learned of this party through ‘interpreter’ Do Thi Thanh. Deaf as a child, Thanh can still hear with hearing aids. She and some  friends founded the Interpreting Group in 2009, which takes over the interpreting and teaching sign language to  hearing impaired people in HCMC every week. This is the third time that she has interpreted for this party.

Silent parties are initiated by a group of youths working in different fields. The parties were first held in Hanoi in 2011, then twice in HCMC in 2012, and once in Cambodia in early 2013 and attracted a total of more than 800 on-site participants and hundreds of thousands indirect guests.

Most of the ticket earnings went to funds to help needy deaf people.

“We are optimistic that there are more and more donors and volunteers who are willing to donate money and efforts,” said Nguyen Thi Hue, head of the organizing board.