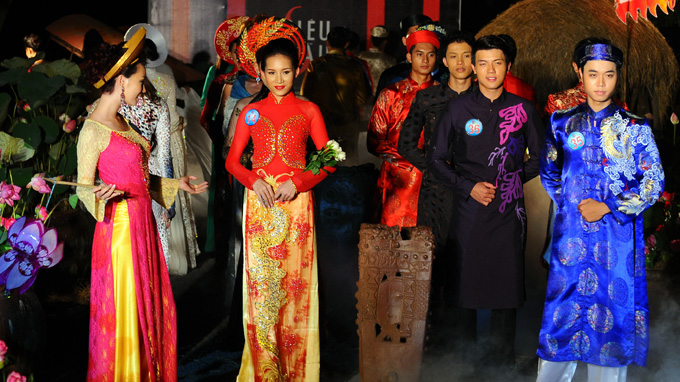 A ceremonial costume designing competition open to all Vietnamese designers at home and abroad failed to garner quality designs. The contest aimed to select a costume to represent Vietnam in national and international activities.

According to the jury of the competition, which started on Aug 1, most of the competing designs were lacking in originality, practicality, convenience, and formality, which are necessary for national and international ceremonies and events. Several designers even borrowed from formulaic Chinese and Western designs.

Because of the low quality of submissions, the jury was unable to choose 20 designs for the final from the 47 designers’ 254 works. Most competitors are amateur designers and students.

Unable to cancel the competition, the jury finally decided to select six designs by three designers that they deemed slightly better than the rest. The shortlisted designs will be improved with counseling from the artistic board regarding patterns, styles, colors, and textures. They will be donned by average people, not models, to present to the artistic board and the press.

Because of the poor quality of the submitted designs, the board will re-open the competition to seven professional designers.

The competition was an attempt to find a new ceremonial costume for males and females to be used in national and international activities. Three seminars were held earlier this year that heard controversial opinions on what the costumes should look like.

In one such meeting in April, while there was wide consensus that “ao dai” (traditional long gown) should be the ceremonial costume for women, many doubted it was appropriate for men due to its femininity and inconvenience.

According to the organizer, the designs had to meet certain requirements. They had to reflect the cultural identity; be fit for national and international ceremonies and rituals; be convenient and appropriate for the country’s weather; and fit and flatter an average Vietnamese person’s body.

The designers were asked to blend traditional and modern elements, and were encouraged to use domestically-made and traditional materials.

Vuong Duy Bien, deputy minister of Culture, Sports and Tourism, said that if the costumes earn positive feedback, the ministry will submit them to the government, which will in turn decide if they are suitable for a national costume.