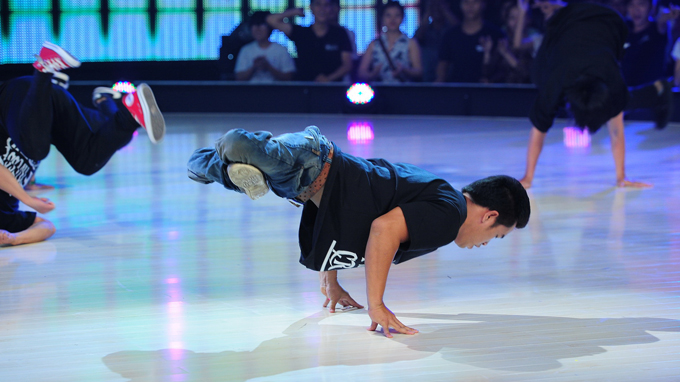 A juror and the audiences of the 2013 Vietnamese version of “Got to dance” reality show were moved to tears at the iron will and amazing skills of a paralyzed man named Nguyen Thanh Trung.

The jury and audiences were held in awe as soon as Trung, 31, got onstage on one of his teammates’ back and then on his two own arms.

Trung dexterously performed several head spins and other technically-demanding moves to the quick-tempo music. As AAT’s group leader, he shined and was integral to earning the ticket to the next round for his group. The final is expected to take place in Jan, 2014.

Trung grew up with atrophied legs as an aftereffect of his childhood poliomyelitic fever. He had to move around on his hands.

He has always tried his best and has triumphed over his disability. He doesn’t allow it to stop him from enjoying his life and doing all that he wants.

Trung has lots of friends and often hangs around with them. During one of his outings, he got to know and instantly got hooked on modern dancing since 2006.

His first practice sessions were like torture to him, as he kept falling and his whole body ached terribly. However, what hurt him most were the looks with disbelief from people around.

“Even my family didn’t believe that someday I would be able to dance. But I was set on making that dream come true,” the young man shared.

After over one year of practice, Trung joined AAT dance group in Can Tho City and soon was chosen to be group leader. He and his group have taken part in several dance competitions and won the top prizes at “Buoc nhay xi tin” (The youthful dance) and “Be U”.

To earn some extra money, Trung’s group often performs at conventions, bars and music stages in Can Tho. Trung is also the group’s lead vocalist.

“I know that more than a few audience members feel pity on me, but I have won over their heart with my dancing ability, not my physical disability. To do this, I have to practice really hard for a long time, and this gives me scars all over my body,” Trung shared.

However, Trung’s main income comes from his swimming passion. An outstanding physically-challenged swimmer, he pocketed the gold medal at the 2012 ASEAN Para Games and was qualified for the Paralympic in London that year.

Trung recently took home three gold medals at a national paragames competition and is so qualified for the ASEAN Para Games late this year.