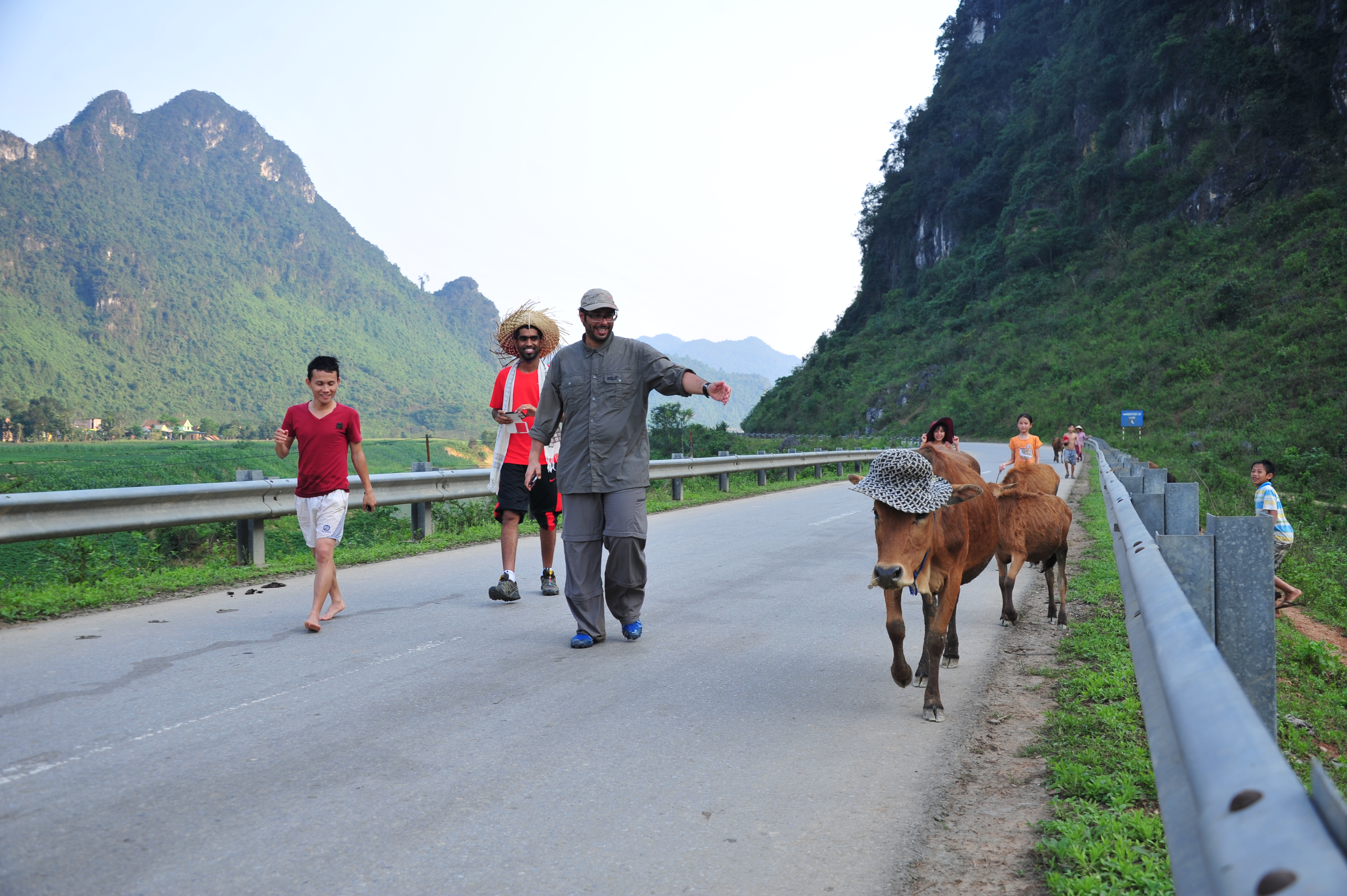 In photos: Arab Sheikh in awe of Vietnam’s Phong Nha on return trip

After his February trip to Son Doong, currently the world’s largest cave in the UNESCO-recognized Phong Nha- Ke Bang National Park in central Vietnam’s Quang Binh province,  Sheikh Hamad bin Hamdan Al Nahyan, a member of the Abu Dhabi Royal Ruling Family in the United Arab Emirates (UAE), returned to the site along with his family and friends in mid-April.

Two months after his first visit to Vietnam in early February, during which he was held in awe by the splendor of Son Doong Cave at Phong Nha- Ke Bang National Park, the Sheikh returned to the site with his family and friends.

During this trip, the Sheikh also spent time roaming the magnificent area on his bike, traversing through the paddies, cornfields, and pepper gardens to learn about the locals’ lifestyle.

During his first trip, the Sheikh said that he would promote the Son Doong cave in one of his kingdom’s major tourism magazines and expressed hopes that local tourism officials will work hard to preserve Son Doong Cave’s pristine beauty and better tap into its adventure tourism potentials.

Sheikh Hamad bin Hamdan Al Nahyan, also known affectionately as The Rainbow Sheikh, has retired from his army service and diplomatic life and now devotes most of his time to the development of new vehicles in the world.

Phong Nha-Ke Bang National Park, some 500km south of Hanoi, is situated in a 2,000km² limestone zone in Vietnamese territory that borders another, similarly sized limestone zone called Him Namno, in Laotian territory.

The park was founded to preserve one of the world's two largest karst regions, with 300 caves and grottoes, as well as the ecosystem of the limestone forest of the Annamite Range region on the north-central coast of Vietnam.

Phong Nha- Ke Bang is noted for its cave and grotto systems, as it is composed of more than 300 caves and grottos with a total length of over 70km.

Prior to the discovery of Son Doong Cave, Phong Nha held several world cave records, as it boasts the longest underground river as well as the largest caverns and passageways in the world.

The park was listed among UNESCO's World Heritage Sites in 2003 for its immense geological value and rich biodiversity.

One of its caves, Son Doong Cave, which has a large fast-flowing underground river within, was found by a local resident named Ho Khanh in 1991.

The cave was discovered while a group of British scientists were conducting a survey in Phong Nha- Ke Bang in 2006. They announced their discovery of the world’s largest cave three years later.

According to the scientists, Son Doong Cave is five times larger than the Phong Nha Cave, previously considered the biggest cave in Vietnam. The biggest chamber of Son Doong is more than five kilometers long, 200 meters high, and 150 meters wide.

With such large dimensions, Son Doong surpasses Deer Cave in Malaysia as the world's largest cave.

Another 39 new grottos totaling the length of 17km have recently been discovered at UNESCO-recognized Phong Nha – Ke Bang National Park, raising the total number of the park’s caves to almost 350.

The new findings came as a result of a field trip, which was jointly conducted by the British Royal Cave Society, the Hanoi University of Science, and the Phong Nha – Ke Bang National Park from March 16 to April 25.