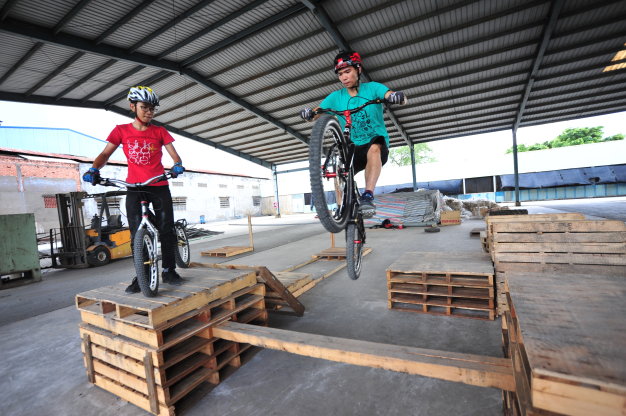 Since 2008, the first few trial bikers in Vietnam have cherished their dream of taking the fledging sport to international competitions, and part of their dream has now been fulfilled, with the launch of the country’s first practice course.

Trial bikes, also known as observed trials, are a discipline of mountain biking in which the rider attempts to pass through an obstacle course without setting foot on the ground.

Trial riding is an extreme test of bicycle handling skills over all kinds of obstacles, which can be both natural and man-made.

Skills taken from trial riding can be applied to any bicycle for balance, for example controlled braking and track standing, or balancing on the bike without putting a foot on the ground.

Trial biking has a following which is gradually expanding worldwide, though it remains primarily a European sport.

In its infancy in Vietnam

According to Ngo Minh Tu, a trial bike pioneer in Vietnam, there are currently around 10 regular practitioners of the sport nationwide.

Two reasons behind the small following are the exorbitant costs of the bikes and scarce supplies.

The more daunting challenge, though, is the riders’ passion and perseverance.

“Some give up and sell their bikes after a short period of practice, as they are put off by their failure to ‘trackstand,’ the most basic maneuver, which means maintaining balance while their bicycle remains stationary or moves only minimal distances,” Tu explained.

Injuries are also a major deterrent for both long-term and professional riders.

The pioneer of trial biking in Vietnam, Tu introduced and began practicing the sport in 2008.

He has since showcased his skills at entertainment events nationwide, including the 2012 “Vietnam’s Got Talent,” the local version of the reality show “America’s Got Talent.”

During the show, Tu persuaded a local model, who was on the jury, to lie on the floor while he skillfully maneuvered his bike and leaped over her several times in front of the awed audience and TV viewers.

Tu, who has left Hanoi for Ho Chi Minh City, is now instilling his passion among youngsters in the southern hub.

The young man has gathered five regular members so far.

Tu and his recruits learn the maneuvers from foreign websites and practice them on sidewalks and in parks.

The group’s dream of having the country’s first course, which allows for professional training and minimizes accidents and injuries, has recently come true.

Their newly-built 3,000m² course in Ho Chi Minh City’s Binh Tan District was constructed using funds from Tu and other members of the group and meets 70 percent of the international standard, Tu proudly said.

The course, housed inside a workshop, has obstacles made from recycled pallets, which were designed and built by the group themselves.

The group now practices three times a week at their new course, and nurture their dreams that Vietnamese trial bikers will compete in regional and international competitions in the near future.