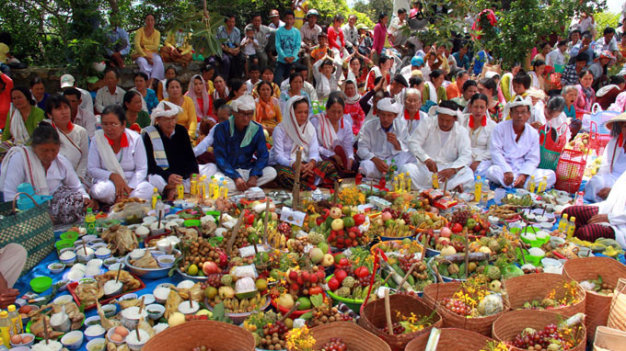 The Katê Festival, one of Cham ethnic people’s major cultural events, is set to run in central Vietnam’s Ninh Thuan Province from Wednesday to Friday.

The festival, held within the first three days of the seventh month of the Cham calendar, pays homage and sends thanks to deities including Po Klong Garai and Po Rome for their blessings, favorable weather, bumper crops and social harmony.

The festival will also be celebrated in Cham villages and households throughout the province.

At the towers, rituals include opening tower gateways, bathing and dressing the statues of deities, traditional dances and offerings.

After the rituals, a slew of cultural, festive activities will be held at Cham villages, including My Nghiep and Bau Truc, such as weaving, porcelain crafting competitions, exhibitions of porcelains, folk music performances and folk games.

The Cham areas are remnants of the Kingdom of Champa (between the 7th and 18th centuries). The Cham, or Urang Campa in the Cham language, is an ethnic group in Southeast Asia concentrated between Kampong Cham Province in Cambodia and central Vietnam's Phan Rang-Thap Cham, Phan Thiet, HCMC and An Giang areas. They form the core of the Muslim communities in Cambodia and Vietnam.

According to official statistics, there are around 145,000 Cham people in Vietnam. The community ranks 14th in size in the country’s general population.