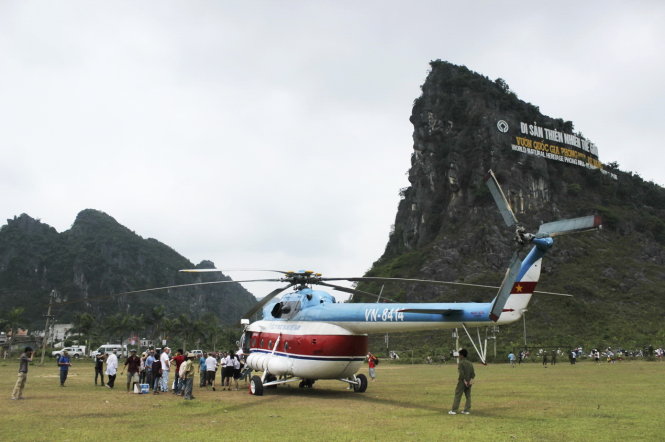 The helicopter tour which took tourists to UNESCO-recognized Phong Nha- Ke Bang National Park in northern Vietnam’s Quang Binh Province is to be suspended due to a shortage of planes available, the tour provider announced on Saturday.

The tour, which was offered by Oxalis- a local tour operator, took a total of more than 60 passengers to the park during three trips starting April 2014.

Nguyen Chau A, Oxalis’s CEO, which also offers tours to the park’s Son Doong Cave- the world’s current largest, explained that they can’t afford the fees if they use choppers departing from Hanoi.

It’s expected that planes won’t be available on a regular basis for the tour until next year, he added.

The tour was jointly launched by Oxalis, Farmstay- a local tour service provider- and Northern Helicopter Co., which belongs to the Ministry of Defense.

The tour offers tourists a chopper ride around the Phong Nha- Ke Bang Park and bird’s-eye views of the stunning landscapes beneath, including Son Doong’s Dia Dang Garden.

Recognized as a UNESCO World Heritage site in 2003, Phong Nha-Ke Bang National Park boasts the karst formation which has evolved since the Palaeozoic (some 400 million years ago) and is the oldest major karst area in Asia. The vast area is home to resplendent formations including 65 km of caves and underground rivers.

Provincial authorities are taking into consideration the construction of a cable car system in and around Son Doong Cave amidst public and expert concerns over the possible damage to the UNESCO World Heritage site surrounding it.

The Son Doong Grotto- the world’s current largest- was discovered in 1991 by Ho Khanh, a local, but only became well-known after a group of scientists from the British Cave Research Association, led by Howard and Deb Limbert, explored it in 2009.