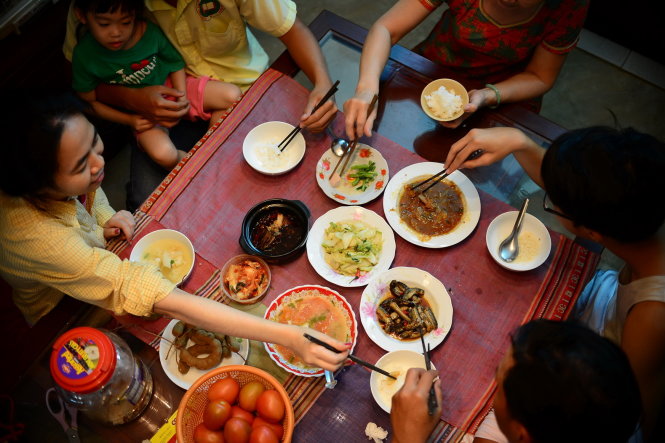 Many Vietnamese people have voiced mixed opinions regarding the use of one’s own chopsticks or spoons while serving fellow diners as a token of politeness and respect on hygiene grounds.

The year’s final months and those prior to Tet (Lunar New Year) are typically the peak wedding season in Vietnam, with many invited to up to 10 wedding receptions or even more each week.

Tet falls on February 19 this year, with festive preparations beginning around one week before the date and the celebratory atmosphere lingering another week after that.

The Lunar New Year is very special in Vietnamese culture as it is an occasion when people get together with their family after spending a lunar year studying or working away from one another.

During these days, apart from other celebratory activities, family members and long-time friends generally get together over sumptuous meals.    It is not an uncommon sight at such feasts to see a well-meaning diner stand up and serve everyone at the table portions of food with the chopsticks or spoons they have been using all along.

Their acts are meant to be polite, especially to elders and women in Vietnamese etiquette and culture.  They are usually not aware that their seemingly polite acts more often than not have adverse effects and cause discomfort to the food recipients.

Many also drop vegetables and meat into the sizzling hotpots with their own chopsticks and even taste the broth with a ladle before using it to serve the hotpots’ content to others.

An elderly man is seen feeding his young granddaughter in this photo illustration.

To serve others with one’s own chopsticks/spoons or not?

The hygiene and etiquette aspects of using one’s own eating utensils to serve others food has sparked well over 100 comments from Tuoi Tre (Youth) newspaper readers.

Several said they are immediately put off eating certain dishes after seeing others dip their own chopsticks or spoons into them and stir up the content of the dishes or bowls.

Many also said they are no longer in the mood to eat after the nasty sight of someone sucking the ends of their own chopsticks before dipping them into small bowls of “nuoc mam” (fish sauce) or other condiments which two or three share at the table.

Other readers weighed in with their stance that the act of serving can also put the recipients into a dilemma, as they are sometimes about to help themselves to a certain dish when a seemingly polite person stuffs or fills their bowls with a portion from other dishes which they dislike or refrain from eating on health grounds or based on dietary requirements.

The “blessed” recipients are either unwilling to finish the food or impolite enough to discard it. Many eat very little and stay hungry and frustrated during such feasts for this very reason.

A young man is pictured serving his daughter food with his used chopsticks in this photo illustration.

Many Tuoi Tre readers are also concerned about the risks of being infected with orally transmitted diseases after being served food with the provider’s own utensils.

Such illnesses as viral hepatitis Types A and E and gastroenteritis have long been confirmed by the World Health Organization to be spread via the use of the same eating utensils.

According to the Vietnam Association of Gastrointestinal Endoscopy, over 80 percent of the Vietnamese population is infected with a bacterium called Helicobacter pylori.

The bacterium is scientifically believed to be the culprit of illnesses related to the stomach, duodenum, and intestines.

It is most commonly found in an infected person’s saliva and tooth tartar, among other areas, and is principally orally transmitted.

Some Tuoi Tre readers even suggested family members or fellow diners set aside a different eating utensil set to collect food from the shared bowls and dishes instead of dipping their used chopsticks in.

A close-up view of an individual of the H. pylori bacteria

Dr. Phan Quoc Bao, of the Ho Chi Minh City University Medical Center, added infection-induced illnesses such as flu or mumps can also be passed on among those who use the same utensils.

“Such diseases usually don’t manifest themselves immediately and the early symptoms can be easily overlooked,” Dr. Bao stressed.

However, many insist that serving others during meals is a long-standing Vietnamese tradition, which could not be done without.

Truong Van Thuan, a Tuoi Tre reader, said that people have long cherished the practice without any serious consequences.

It is far from being a problem among members of the same family, or lovers.

Doankimhong, another reader, said food hygiene safety and the rampant use of toxic chemicals in food are considerably more worrying.

Dr. Nguyen Nha, a veteran culture researcher, said in the past people required that minors and youngsters respectfully serve food to their elders with their clean, unused chopsticks.

He also urged that parents should adopt proper eating etiquette to set an example for their children.

Meanwhile, many have suggested ways to reconcile the long-standing tradition with hygiene safety.

“It’s hard to reject the food being served by others. It’s also awkward to ask for a bowl of fish sauce for one’s own while two or three other diners share one,” Dr. Phuong said.

She advised that those who wish to serve food should use other pairs of chopsticks and spoons, which are meant only for serving food.

Dr. Bao urged against using the opposite, bigger ends of the chopsticks to serve food to others, as those ends are usually in contact with hands and the chopstick containers and thus are not hygienically safe either.