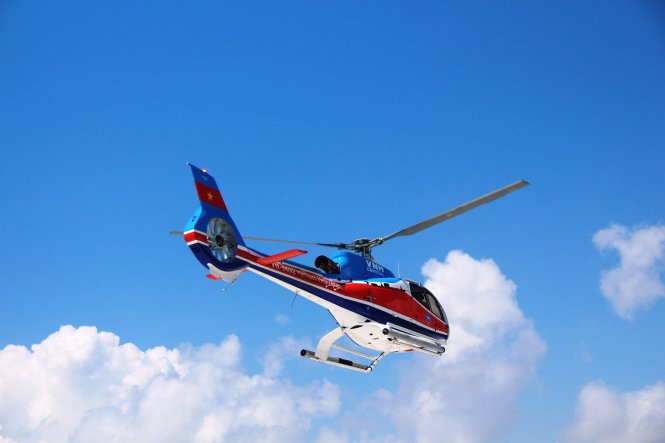 Apart from Hanoi and Ho Chi Minh City, more provinces and cities have geared up to welcome tourists for the Reunification Day holiday, while some others have launched new helicopter tours and airplane routes to facilitate sightseeing and travel.

The combined Hung Kings’ Death Anniversary, Reunification Day, and Labor Day holiday will last from Tuesday to Sunday next week.

Several provinces and cities are ready for tourist influxes with a wide array of activities and their well-prepared accommodation and transport facilities.

Nguyen Van Hanh, director of Petro Express, a local hydrofoil operator, told Tuoi Tre (Youth) newspaper that his company will raise the daily number of hydrofoil rides to 16 from 10 during the holiday, with fares unchanged.

Meanwhile, 13 hotels with over 200 rooms on Ly Son Island, located off the central province of Quang Ngai, were fully booked two weeks ago.

According to Pham Hoang Linh, deputy chair of the Ly Son People’s Committee, his committee has talked 20 local households and owners of age-old houses into offering homestay services to welcome the tourist arrival surge during the upcoming holiday.

Similarly, the People’s Committee of Hoi An City, located in the central province of Quang Nam, has also announced diverse celebratory activities to embrace the holiday.

Among them is the fourth Vietnam International Choir Competition, which will run from Wednesday to Sunday next week in the city, which is home to UNESCO-recognized Hoi An Ancient Town.

The competition attracts more than 2,300 artists from 15 countries who will contend in 13 categories, including chamber music, church, and folk choir performances.

The contending artists will also take performances of choirs, dances, and recitals of musical instruments to the streets.

The street art performances will be staged in Hoi An Ancient Town and its neighborhood free of charge for locals and tourists to enjoy.

Another highlight will be the “Dem Cu Lao” (Islands Night) program on Cham Islands, a group of eight small islands off Quang Nam, which form part of the Cu Lao Cham Marine Park administered by Hoi An City.

The park was recognized as a World Biosphere Reserve by UNESCO in 2009.

The program is designed to re-enact the lifestyle and fishing practices of fishermen on the islands, and boasts a cuisine section, music performances, and the re-enactment of local legends.

Ceremonies to pay tribute to the pioneers of the salangan nest collecting craft and recognize three trees indigenous to the islands as the country’s heritage will also be held.

Ong Beach on Cham Islands, located off Hoi An City in the central province of Quang Nam. Photo: Tuoi Tre

The forthcoming six-day holiday and the biennial Da Nang International Fireworks Competition (DIFC) this year have drawn soaring tourist arrivals to the central city of Da Nang, with many hotels operating at full room capacity.

This year’s DIFC festival will take place on the city’s iconic Han River on Tuesday and Wednesday.

The event, in its seventh edition, will see stunning pyrotechnic spectacles from teams from South Africa, the U.S., Australia, Poland, and Vietnam.

Many other sideline activities, including a culinary exchange, art lighting performance, beach sports, and music and fashion shows, will be conducted alongside the fireworks competition.

The contest will be promoted on several international TV channels, including StarWorld, National Geographic, and BBC World, the organizer said.

According to Nguyen Duc Vu, vice head of Son Tra Peninsula and Da Nang Beaches Management, a beach tourism program is also running from Saturday to May 2 in Bien Dong Park on the peninsula.

The program features such fascinating activities as aquatic sports, a glider performance, a kayak race, and a coastal festival which accentuates fishermen’s daily routines and folk games.

The Da Nang Department of Culture, Sports, and Tourism expects tourist arrivals from April 26 to May 3 to reach 86,570, an estimated 28.36 percent year-on-year rise.

Meanwhile, the Vietnam Helicopter Corporation on Friday began offering chopper tourism services, including tours around Da Nang and charter flights to scenic spots in other provinces and on personal demand.

It will cost tourists VND3.5 million ($163) each for the 25-minute tour, which departs from Nuoc Man Airport and goes around Son Tra Peninsula and the Hai Van Pass, one of the country’s most spectacular, before returning to the airport.

The Vietnam Helicopter Corporation will use the French-built EC130T2 Airbus helicopters, which are some of the world’s most tourism choppers, for the services.

A helicopter used by the Vietnam Helicopter Corporation for its newly launched chopper tourism services, including tours around the central city of Da Nang and charter flights to scenic spots in other provinces and on personal demand. Photo: Tuoi Tre

A new air route from the Mekong Delta city of Can Tho to Da Lat, a beloved resort city in the Central Highlands province of Lam Dong, is expected to be launched early next month.

With the launch of the air route, Nguyen Quoc Ky, CEO of Vietravel, a major local tour operator, hopes to offer more tours to other provinces in the Mekong Delta in the time to come.

Representatives of the Vietnam Air Services Co. told Tuoi Tre that the Can Tho-Da Lat service will take up to one hour in the initial phase.

The company expects to cut the duration down to 35 minutes for direct flights from Can Tho to Da Lat, starting the third quarter of this year.

Sampans loaded with produce are seen on a river in the Mekong Delta. Photo: Tuoi Tre