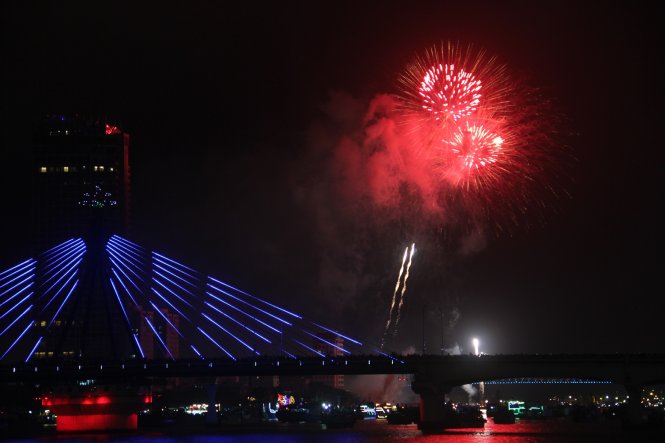 The stunning pyrotechnic displays during the first night of this year’s international firework competition hosted by the central city of Da Nang held over 30,000 local and foreign spectators in awe.

The two-day Da Nang International Fireworks Competition (DIFC,) in its seventh edition, has more delightful surprises in store for Wednesday night before the winner is announced.

The DIFC 2015 takes place on the iconic Han River on Tuesday and Wednesday.

The event, themed the “symphony of colors,” draws contenders from South Africa, the U.S., Australia, Poland, and Vietnam, which represent the world’s five continents.

Last night saw the spectacular performances by teams from South Africa, the U.S., and the host team of Da Nang.

At 8:35 pm last night, Fireworks for Africa from South Africa opened the competition with their dazzling firework displays against the melodic background music.

The spectacles were enthusiastically hailed with roaring applauses from roughly 32,000 seated audience members on the stand and some 10,000 others lining the Han River banks.

A display by the South African team. Photo: Tuoi Tre.

Meanwhile, the performance given by Pyrotecnico from the U.S., which seamlessly fused fireworks displays, special effects and laser designs, held spectators spellbound from start to finish.

The high-range, non-stop display towards the end of their show sent audiences screaming with excitement.

The Da Nang team wrapped up last night’s competition with a show which accentuates the country’s cultural identity and people’s charms against a fabulous dance of colors, lighting and images.

Thousands of locals and tourists flocked to the main stand on Tran Hung Dao Street and such proximity streets as Tran Phu as early as Tuesday afternoon, eager for a night of thrills and fun.

Security forces are densely deployed along the Han River to ensure the event’s seamless operation and spectators’ maximal safety.

Howard & Sons Pyrotechnics from Australia and Surex Firma Rodzinna from Poland are set to showcase their flairs at tonight’s competition before the winner is named.

Many other supportive activities, including a culinary exchange, art lighting performance, beach sports, and music and fashion shows, are also held along with the fireworks competition.

Famous international TV channels including StarWorld, National Geographic, and BBC World will promote the event to Asian audiences, according to the organizer.

It is estimated to cost Da Nang VND50 billion (US$2.33 million) to host the event, and the city is not allowed to use money from its own budget, the organizer added.

Team Melrose Pyrotecnics from the U.S. secured the first place of the 2013 edition, themed “Love of Han River.”

Below are some photos of the host city of Da Nang: