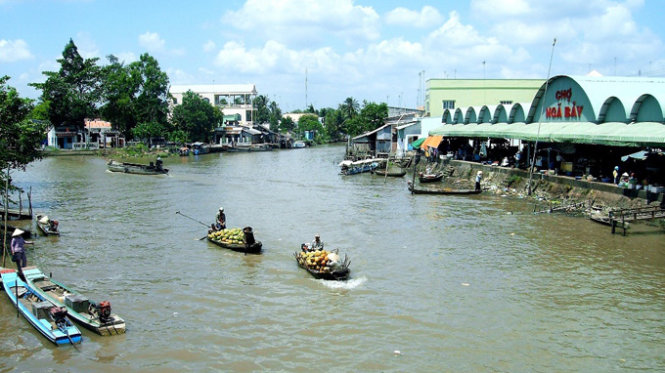 More than US$1.6 million has been earmarked for a project to restore a century-old floating market in the Mekong Delta with a view to leveraging the region’s waterway ecological tourism potential.    Work started on Friday on the revamp of the Nga Bay Floating Market in Nga Bay Town of Hau Giang Province.

The project, worth over VND35 billion ($1.63 million), including more than VND22 billion ($1.03 million) from the central government’s coffers and the remainder from the provincial budget, is implemented on a land plot and water area spanning over 3,100 square meters.

It is aimed at re-enacting more peddling scenes of the river market and its bustling milieu, and harnessing the area’s green tourism potential.

The project will also see the construction of a wharf, which is capable of harboring 10 tourist boats of around 200 passengers each during one market session.

VOV cited Tran Cong Chanh, chair of the provincial People’s Committee, as saying that the project is of great significance to Nga Bay Town regarding its urbanization and tourism growth.

Established around 1915, the Nga Bay or Phung Hiep Floating Market is among the Mekong Delta’s largest of its kind.

It took French people up to 10 years to dig the Xang Canal to form seven tributaries, and the waters grew into the southern region’s largest waterway traffic artery back then.

'Nga Bay' is the Vietnamese equivalent of ‘seven tributaries.’

The floating market offers a wide array of local produce and goods, ranging from delectable tropical fruits, rice, salt, honey, wood, handicraft and household items, to snakes and some other reptiles.

A ride on a sampan amidst many others loaded with goods in the vastness of the river tributaries would make an engaging experience for both local and foreign tourists.