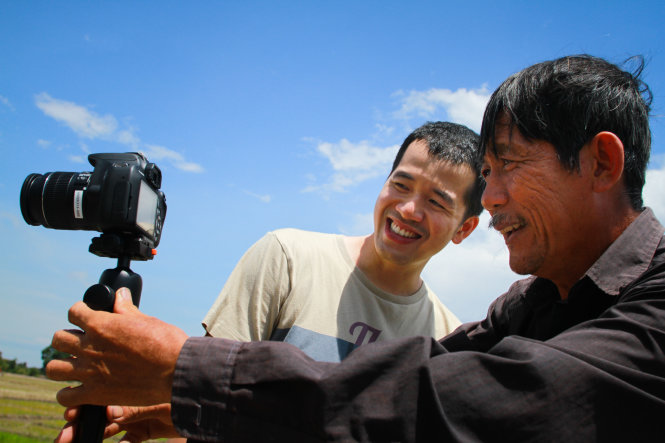 In Vietnam, farmers make shorts to give their work a face

A handful of farmers in a Mekong Delta province are now creating films which will compete at an international video competition for peasants next month.

Four technically unsophisticated farmers, who live in Thu Thua District in Long An Province, are joining a film project called “YouFarm – Canh Dong Que Toi” (YouFarm – Paddy Fields in My Hometown).   The project is aimed at helping the farmers make four shorts, each of which will be around three minutes in length.

The project kicked off early this month, while filming began on Monday and will finish on Sunday.     The farmers’ four films will be screened on June 15 at http://www.facebook.com/youfarmcanhdongquetoi?fref-ts.

On June 21, the two best films will compete at the “YouFarm – Farm and Family” video competition for farmers around the world, which is initiated by Bayer Group, a multinational chemical and pharmaceutical company, to improve public understanding of the role of farmers in today’s society while enhancing awareness of topical agricultural issues such as food safety and sustainable farming.

The results of the Bayer competition are expected to be announced around mid-August.

They merely use feature phones and they do not even look at their phone screens to see who is calling, just as if they were using a landline device.

“All that counts is their bursting energy and willingness to join our project,” she noted.

The farmers started out clumsily but gradually got used to the devices, which helps them capture the rustic landscape and their own and families’ everyday life.

They take great pride in their debut artwork and are delightfully surprised at how gorgeous their paddies and the surroundings are in their footage.

The films, though brief, speak volumes about their strenuous farm work and the difficulties they face.

The young directors find the films’ limited length a great challenge in helping the farmers tell their stories in the most concise, intriguing way.

“The farmers’ candid yet riveting stories and stunning glimpses of their pastoral life are a boundless source of inspiration and nourishment for rural-themed topics, which we young directors have few opportunities to address in our artworks,” Ta Nguyen Hiep, one of the three participating directors, said.